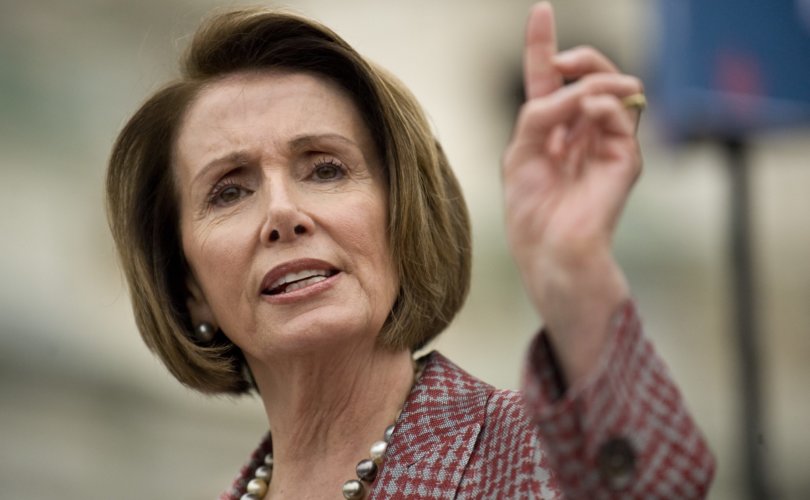 Pelosi brought her grandchildren to see her receive an award from the Gay and Lesbian Victory Fund, to show the young, impressionable children that “marriage equality is important.”

In an interview with Thomas Roberts on MSNBC, Pelosi said she took the children to the Gay and Lesbian Victory Fund gala because “it's really important to see what the practice of our faith is.”

Pelosi, who described herself as a faithful Christian and “mainstream Catholic,” said her pre-adolescent grandchildren needed to see and be present at a gay and lesbian celebration in order “to give them the image that we have for all people,” meaning the image the Catholic Church has for all.

The House Minority Leader explained that same-sex marriage “is important,” and that her grandchildren “have been hearing this [message supporting gay 'marriage'] their whole life” because “they go to Catholic school.”

In perhaps the most controversial of her statements, Pelosi said, matter-of-factly, that same-sex 'marriage' “is consistent with the dignity and worth we [Catholics] attribute to every person.”

Roberts asked about comments from Sen. Marco Rubio, R-FL, that continual demonization of traditional Christians could get the Catechism of the Catholic Church branded as “hate speech.” Pelosi responded, “I thoroughly disagree, being raised in a Catholic family [and] raising a Catholic family.”

Pelosi contrasted what she characterized as Sen. Rubio's “polarizing” and “unfortunate” Catholicism with her own “mainstream Christian thinking.”

She summarized Catholic catechism as teaching support of gay 'marriage'. “The fact is, what we’re taught was to respect people in our faith.” Pelosi went on to criticize Rubio's opposition to gay 'marriage', explaining, “To say that [homosexual 'marriage'] endangers mainstream Christian thinking is so completely wrong.”

Pelosi added, “I don’t even think that Pope Francis would subscribe to what Sen. Marco Rubio said” supporting traditional marriage.

The House leader concluded with the hope that Rubio would change his position on gay 'marriage'. “I hope that we can persuade him differently, because the country is going in a completely different direction now. And it’s very, very exciting.”

It was not her first theological faux pas. In the past, she has claimed that the Catholic Church has only opposed abortion for “like maybe 50 years or something like that.”

Some journalists couldn't resist editorializing Pelosi's pro-homosexual “Catholicism.” Reporter Dan Riehl commented, “Based upon the above, it would seem the only Catholics Pelosi 'respects' are those who agree with her.”

Dr. Thomas Williams of Breitbart.com commented, “On two of the biggest social justice issues of our day – abortion and gay marriage – Pelosi has taken a hardline stand in direct opposition to Church teaching, something resembling a 'faithful' Greenpeace member advocating baby seal killing or an orthodox Jew pushing pork.”

In past speeches, Pelosi called pro-lifers “dumb,” “closed-minded” and “oblivious.” When she won Planned Parenthood’s highest honor, the Margaret Sanger Award, Pelosi's anti-life comments were even contradicted by her archbishop, Salvatore Cordileone of San Francisco.

“No Catholic can dissent in good conscience” from the church's teaching on the sanctity of life, he said.

‘Prominent’ Catholics attacking Archbishop Cordileone are big donors to Pelosi and pro-abort Democrats
Pelosi on abortion battles: I’m Catholic, but Republicans need ‘a lesson on the birds and the bees’
Nancy Pelosi to receive Margaret Sanger Award from Planned Parenthood

Pelosi asked twice if unborn baby at 20 weeks is ‘human’: refuses to respond
Archbishop to Pelosi, critics: No, I won’t drop March for Marriage
Pelosi award marks her legacy as disciple of eugenicist Margaret Sanger