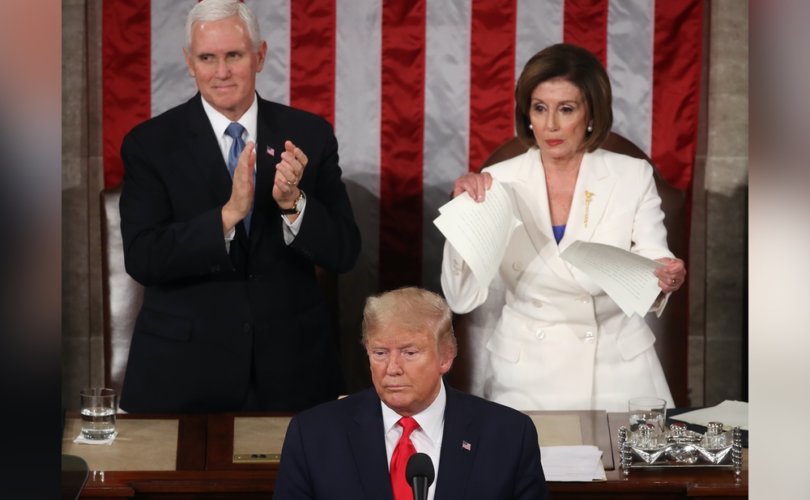 February 7, 2020 (LifeSiteNews) – U.S. House Speaker Nancy Pelosi has suggested that President Donald Trump doesn’t “understand about prayer or people who pray,” while claiming to “pray hard” for the president herself.

“I don’t know if the president understands about prayer or people who pray,” Pelosi said Thursday at her weekly press conference.

“I pray for the United States of America, I pray for him, I pray for President Bush still, President Obama…because it’s a heavy responsibility…I pray hard for him because he’s so off the track of our Constitution, our values, our country…He really needs our prayers,” continued Pelosi. “So he can say whatever he wants, but I do pray for him and I do so sincerely and without anguish, gently, that’s the way I pray for everybody else.”

Pelosi, who led the impeachment efforts against Trump, champions abortion on demand and same-sex “marriage.” In 2013, while dodging a question about late-term abortion, Pelosi said, “As a practicing and respectful Catholic, this is sacred ground to me when we talk about this.”

Earlier on Thursday Trump had addressed the 2020 National Prayer Breakfast, where he spoke about the importance of prayer for America and Americans, cited the efforts he and his administration were making to defend persecuted Christians and religious minorities all around the world, and concluded his speech with a prayer.

“Faith keeps us free. Prayer makes us strong,” Trump said during his address. “And God alone is the author of life and the giver of grace.”

Trump concluded with a prayer:

This morning let us ask Father in heaven to guide our steps, protect our children, and bless our families. And with all of our hearts, let us forever embrace the eternal truth that every child is made equal by the hand of Almighty God.

Pelosi also attended the breakfast, sitting just a few seats away from Trump at the head table. Before Trump spoke, the California Democrat took to the podium and read a prayer for religious liberty.

She neither addressed nor acknowledged President Trump, forgoing an opportunity to publicly apologize for her recent insulting gesture on national television, ripping the text of his State of the Union speech as she stood behind him.

During his speech at the breakfast, Trump took aim at people who he says “use their faith as justification for doing what they know is wrong.” In a reference to the failed impeachment proceedings taken against him, Trump said: “So many people have been hurt, and we can’t let that go on.”

Pelosi frequently brought up prayer as she led the impeachment efforts against Trump. Sen. Mitt Romney (R-UT), the lone Republican to vote “guilty” on one of the impeachment charges, cited his Mormon faith as a reason for doing so.

In 2015 Archbishop Salvatore Cordileone, Pelosi’s local bishop, responded to her repeated refusal to say whether an unborn child at 20 weeks is a “human being” by reminding Pelosi that “no Catholic can dissent in good conscience” on abortion.

“It is a scientific fact that human life begins at conception,” he said. “This has been established in medical science for over 100 years. Catholic moral teaching acknowledges this scientific fact, and has always affirmed the grave moral evil of taking an innocent human life.”

“This has been the consistent teaching of the Church from the very beginning, a teaching already discernible in the natural moral law, and so a teaching from which no Catholic can dissent in good conscience,” he added.

Pastors, he said, have an “obligation … to reach out to their people who have difficulty understanding and accepting such important teachings of the Church in order to extend to them true pastoral care and, where appropriate, to establish a regular dialogue.”

In light of Pelosi’s numerous recent high-profile references to her faith and professions to be Catholic, LifeSite has written to Archbishop Cordileone to enquire whether he has instructed the clergy of his diocese to deny Pelosi Holy Communion due to her long-term, consistent support for abortion. LifeSiteNews did not receive a response by the time of publication, but will update this article when we do.

In December last year Pelosi reacted angrily when asked by a reporter if she hated Trump. Pelosi cited her Catholic upbringing, as she claimed that she didn’t hate anybody. “I was raised in a Catholic house. We don’t hate anybody,” she said while wagging her finger. “Not anybody in the world.”

“I think the president is a coward when it comes to helping our kids who are afraid of gun violence,” she said. “I think he is cruel when he doesn't deal with helping our ‘Dreamers’ of which we are proud. I think he is in denial about the climate crisis.”