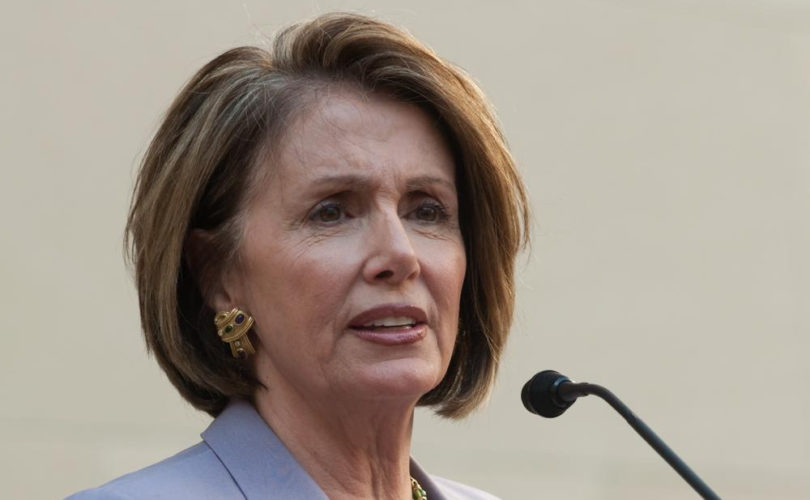 WASHINGTON, D.C., January 13, 2016 (LifeSiteNews) – After decades as a crusader against any restriction or regulation of abortion, Democratic Congresswoman Nancy Pelosi said yesterday, “I don’t believe in abortion on demand.”

The House Minority Leader, who regularly earns a zero percent rating from the National Right to Life Committee, told Roll Call on Tuesday that she is “with the program” of the Catholic Church when it comes to abortion.

“The Leader should stop using twisted GOP talking points about abortion and birth control. We don't know women who demand abortion or use abortion as birth control,” said Sasha Bruce, NARAL's senior vice president for campaigns and strategy. “We do know women who make thoughtful decisions about how and if they want to start a family, and who need access to all reproductive-health care services, including abortion.”

Elsewhere in the video, Pelosi seemed a bit sketchy on the present state of U.S. abortion law. When told abortion is available until the day of birth, she replied, “No, it is not.”

While Roe v. Wade established the familiar trimester system, allowing for progressively greater regulation as the child develops, the Doe v. Bolton ruling Supreme Court justices released at the same time allows broad availability of abortion on the grounds of a mother's “health.”

Pelosi, who has voted against a partial birth abortion ban and last year voted against a bill criminalizing abortionists who do not care for infants born alive during botched abortion, dismissed undercover videos recorded by the Center for Medical Progress (CMP) by saying, “They're doctored.”

Yet both analyses of the CMP footage – including the analysis paid for by Planned Parenthood – found that there had been “no evidence of substantive video manipulation” of the videos.

“I did not sit down and watch their doctored versions of what may have happened,” Pelosi said of the CMP videos. “And I still say they’re doctored.”

She also proclaimed her Catholic faith during the interview in unusually strong terms, using the word “Catholic” four times in a matter of seconds. The San Francisco Democrat said she is “a Catholic – a devout, practicing Catholic” who comes from “a very Catholic family.”

“I’m with the program in terms of the Catholic Church,” she said.

But Pelosi had previously called abortion “sacred ground” and stated that the Catholic Church did not reject abortion until “like maybe 50 years or something like that.”

Of course, the Christian Church has rejected abortion since its founding.