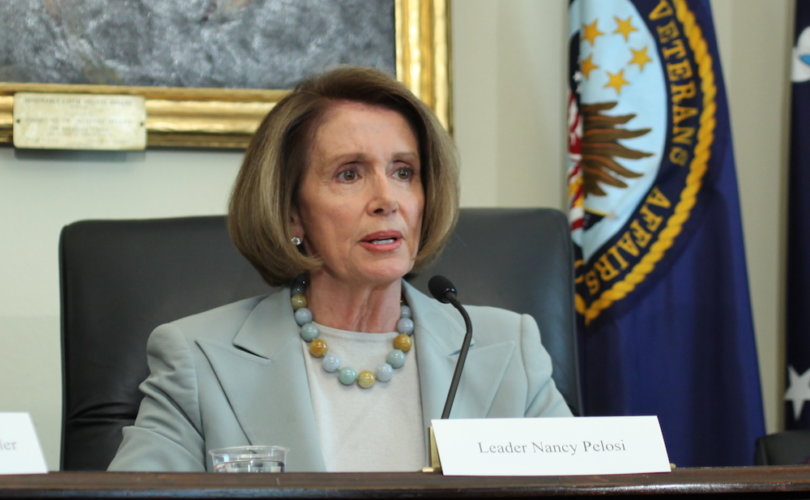 WASHINGTON, D.C., May 18, 2016 (LifeSiteNews) – Nancy Pelosi said last week that investigating Planned Parenthood for its role trafficking in human remains is “un-American,” and likened the effort to get to the bottom of the abortion scandal to anti-communist hearings in the U.S. Senate prompted decades ago by Joseph McCarthy.

“What's going on in the Congress today is, to borrow a phrase, unAmerican,” Pelosi stated.

The House Minority Leader’s remarks came last Friday at a press conference arranged by Democrats to get notice for their call to scrap the committee set up to investigate the abortion behemoth, The Hill reports, Dems claiming it is endangering abortion providers and violating chamber rules.

Using the deceased senator at the center of controversial 1950’s anti-Communist Senate Subcommittee hearings, the California Democrat, a fierce abortion proponent, inferred the House Select Panel on Infant Lives was on a witch hunt, claiming the committee is acting in ways “not seen on Capitol Hill since the days of Joseph McCarthy.”

House Democrats have written House Speaker Paul Ryan complaining about the committee examining whether the abortion industry profits from the sale of aborted fetal organs and tissue. At least a dozen pro-abortion organizations have failed to cooperate with the committee’s subpoenas.

Among the Democrat claims is that Chairwoman Republican Marsha Blackburn has violated rules by not notifying them in advance of “secret” subpoenas to medical researchers, fetal tissue procurement companies and others, an allegation rejected by Blackburn’s spokesman.

The congresswoman had in fact informed Democrats of subpoenas 72 hours ahead of time, Mike Reynard said. And he answered another Democrat accusation of lengthy questioning at a committee hearing, stating the deposition “lasted much longer than it needed to solely because of the Democrats and the witnesses’ attorneys” putting forth “baseless” objections.

The committee is endangering the lives of abortion doctors and researchers by asking for their names, the Democrats also allege, citing as example notorious late-term abortionist Leroy Carhart, subpoenaed two weeks ago to testify June 13 on whether he has illegally sold aborted babies' remains and let babies born alive die after botched abortions.

Democrats insist Carhart is the victim of a “dangerous” Republican “witch hunt,” and the committee is guilty of putting his life at risk.

“The only purpose of that is to endanger that person's life further,” said Democrat Representative Jerrold Nadler. “That person travels with security. He has been firebombed. He has been threatened, and if you look at everything they say they want to investigate, they are criminal allegations, no business of Congress. If they have evidence of any of this, they should refer it to the U.S. attorney.”

The attempt to draw a parallel between Senator McCarthy and the Planned Parenthood investigation is a repeat from the pro-abort playbook, with Nadler saying at the panel hearings last month, “This committee is worse than McCarthy investigations, because McCarthy endangered…people’s jobs. This committee is knowingly endangering people’s lives,” and Planned Parenthood’s Vice President for Public Policy Dana Singiser having stated, “This witch hunt, led by Chairman Blackburn and Speaker Ryan, is arguably worse than McCarthyism.”

Democrats are “definitely now ratcheting it up” on their demand to disband the committee, said Democrat Representative Jan Schakowsky, a signer of the letter to Ryan.