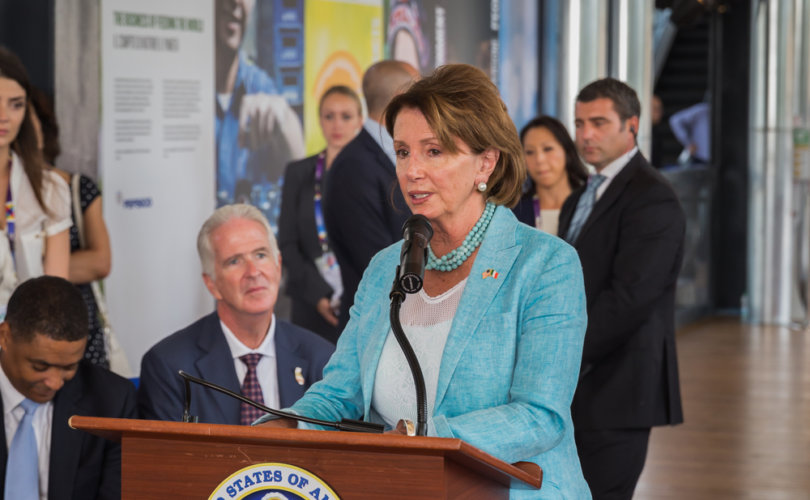 Pelosi at the same time also disclosed the party’s four-part agenda to promote acceptance of the homosexual lifestyle across the nation.

“Legislatively, we couldn’t really succeed, but from the courts and the rest, and public opinion, of course, in the actual courts and in the court of public opinion, that victory has been won,” Pelosi said, referencing last June’s Obergefell v. Hodges Supreme Court decision mandating legal recognition of homosexual “marriage” in all 50 states.

Speaking at press conference for The Equality Act (HR 3185), the Democrat House Minority Leader said securing homosexual “marriage” as the law of the land was just part of Democrats’ overall four-point plan to advance special rights for individuals identifying as LGBT.

The Equality Act amends the 1964 Civil Rights Act to include “sexual orientation” and “gender identity” as protected classes under the law, adding them to the present ban on discrimination for race, color, religion, sex or national origin.

Democrats are pushing for movement on the measure in response to recent laws passed in states such as North Carolina, Mississippi and Tennessee, protecting privacy in restroom facilities, legislation they consider discriminatory.

Pelosi identified the first of four segments of the Democrat plan as “hate crimes” legislation.

“Just to place where we are in context from the standpoint of Congress, when we came into the majority we had four points,” she said, “it was a four-legged stool of what we wanted to accomplish – to pass a fully inclusive hate crimes legislation.”

This was was achieved through the 2009 “Matthew Shepard and James Byrd, Jr. Hate Crimes Prevention Act,” expanding existing law to include criminalization of acts of violence motivated by “actual or perceived gender, disability, sexual orientation, or gender identity of any person.”

The California congresswoman further listed the Democrat strategies of encroaching on administration of the U.S. military through repeal of “Don’t Ask Don’t Tell,” and stifling religious liberty in employment law with ENDA, the Employment Non-Discrimination Act.

Pelosi’s second leg, repeal of “Don’t Ask, Don’t Tell,” and compelling protection of open homosexuality in the military, “would not have happened without the president’s leadership and courage,” she stated.

The fourth leg of the stool is passage of ENDA, which creates new protected classes, threatens employers’ religious liberty and livelihoods, and has been criticized by the US Bishops for its potential to punish those holding traditional views on sexuality and biology. The Act has not been passed.

“There’s one other piece, which is ENDA, ending discrimination in the workplace, which is really a very important piece of the agenda,” Pelosi said, according to World Net Daily. “But as we were seeing the successes and the momentum, especially of the marriage equality, we saw the opportunity to do something bigger” (with The Equality Act).

Pelosi added in her remarks on the latest Democrat-proposed legislation yesterday that some had opposed the inclusion of “transgender” in the measure, but this opposition was rejected and the move to keep “transgender” as a class in the Act succeeded.

The Equality Act as “so about American values,” Pelosi said.

The former House Speaker and her colleagues at the press conference announced they have written Representative Robert Goodlatte (R-Va.), head of the House Judiciary Committee, urging him to schedule a hearing for The Equality Act.