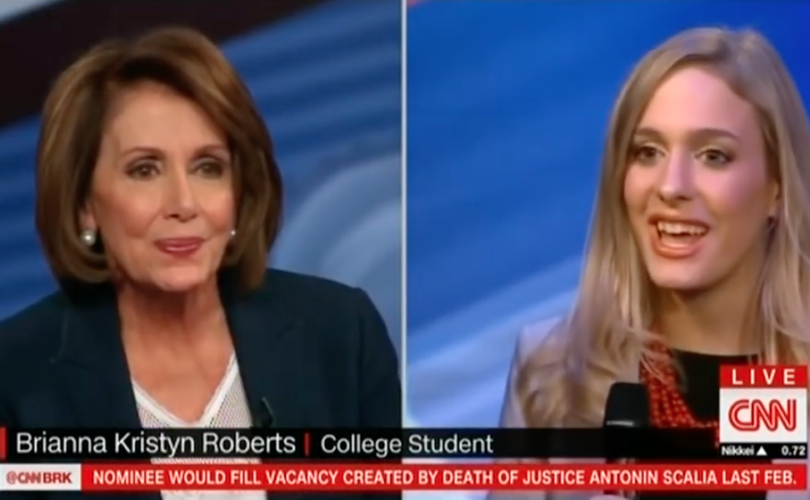 February 9, 2017 (LifeSiteNews) – Pro-abortion House Minority Leader Rep. Nancy Pelosi was quizzed on her abortion support by a pro-life student who was adopted at a CNN townhall. In response, Pelosi told the student that it was important that her birth mother had the ability to “choose” whether to abort or give birth to her, and went on to suggest that pro-life activists aren't concerned with the wellbeing of children after they're born.

“I am part of the pro-life generation,” said college student Brianna Kristyn Roberts. “I believe that abortion is not the answer for unplanned pregnancy.

“I certainly do, and I love the word you used,” Pelosi, who says she is Catholic, retorted. “You said, ‘my mother chose.’ My mother chose. And we want people to … have that opportunity to choose as well.”

What exactly mothers should be able to choose the California Congresswoman didn't specify. But she did imply that people who oppose abortion haven't done enough to help children.

“And when we do, my whole thing, when people ask me what are the three most important issues facing the Congress, I always say the same thing: our children, our children, our children,” Pelosi continued. “Their health, their education, the economic security [of] their families, [a] clean environment in which they can thrive, world peace in which they can succeed and reach their aspirations. But many of our friends who are so intent on … when life begins in their view do not subscribe to that after the child is born to meet the needs of the children.”

Pelosi then suggested that “we haven't made the right decisions” to help “lift all” children up.

“So I hope you will join us in our quest to say that all of the children in our country – that one in five children in America lives in poverty, goes to sleep hungry at night – in the greatest country that ever existed in the history of the world. And why? Because we haven’t made the right decisions, uh, to lift all of those children up. And that’s why I say to my colleagues, ‘show me your values, show me your budget. What are you doing to lift these children up?’” Pelosi asked.

“So I hope that respecting your mother's … ability, to make her choice – I hope you’ll help us help all of these children to be able to thrive when their mothers make that choice to have them as well,” she concluded.