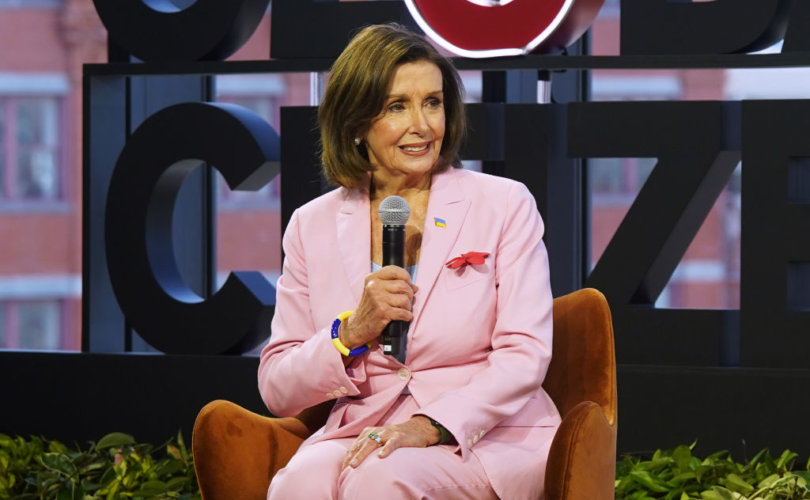 WASHINGTON D.C (LifeSiteNews) – Self-described “Catholic” Speaker of the House Nancy Pelosi has ignored the direct order of her local archbishop not to present herself for Holy Communion due to her open support of abortion, reportedly receiving the Sacrament in a church in Washington, D.C., Sunday.

According to a Monday Politico Playbook report, Democrat Speaker Pelosi attended the 9 a.m. Mass on Sunday at Holy Trinity in Georgetown, where she was spotted receiving Communion despite the order of San Francisco Archbishop Salvatore Cordileone that she is not to present herself for the Sacrament.

“[Y]ou are not to present yourself for Holy Communion and, should you do so, you are not to be admitted to Holy Communion, until such time as you [publicly] repudiate your advocacy for the legitimacy of abortion and confess and receive absolution of this grave sin in the sacrament of Penance,” Cordileone wrote to Pelosi in a “notification” published Friday.

However, video footage from notoriously liberal Holy Trinity parish appears to show Pelosi in an orange blazer receiving Communion from a Eucharistic minister on the right-hand side of the Church, and not from the priest.

Here’s a video from @holytrinitydc showing House Speaker Nancy Pelosi receiving communion from a Eucharistic minister -not the priest- at mass on Sunday. She’s wearing an orange blazer in the right line. pic.twitter.com/4WnChU7KGj

According to The Daily Wire, the Holy Trinity parish is also advertising an upcoming “Pride Mass” on June 15, including a statement affirming the “ministry and leadership” of so-called “LGBT” parishioners.

Father C. Kevin Gillespie, pastor at the Jesuit parish, has previously said that he would distribute Communion to ardently pro-abortion President Joe Biden, arguing that the self-described Catholic president is “a man of faith, and I would give Communion to him like any other Catholic coming up for the Eucharist.”

Like Biden, Pelosi has been a long-time advocate of increasing access to abortion, receiving a “100%” scorecard from Planned Parenthood for her congressional voting record on abortion.

Following Cordileone’s order for Pelosi to publicly repudiate her support for the “grave sin” of abortion, the Washington Archdiocese accidentally sent an email response to an inquiry from the Washington Examiner asking whether Cardinal Wilton Gregory would deny the California legislator Communion, telling the outlet that the archdiocese is ignoring all press inquiries on the matter.

WOW. Washington Archdiocese accidentally sent this email to @dcexaminer admitting that it is ignoring press inquiries about whether @WashArchbishop will “bring down the hammer on Pelosi.” pic.twitter.com/KPtY6gpZzu

Within his letter, Cordileone specified the reason for imposing the sanction on Pelosi, who is a parishioner of his archdiocese, was that as a “Catholic legislator who supports procured abortion, after knowing the teaching of the Church, commits a manifestly grave sin which is a cause of most serious scandal to others.”

“Therefore,” the prelate wrote, “universal Church law provides that such persons ‘are not to be admitted to Holy Communion’ (Code of Canon Law, can. 915).”

The Catholic Church teaches that the Eucharist is the literal body, blood, soul, and divinity of Jesus Christ. The Church teaches that no Catholic who has committed a mortal sin is to present himself for Holy Communion until he has confessed that sin in the Sacrament of Confession.

Prior to Cordileone’s order, Pelosi had said that she has not experienced any “difficulties” in receiving Communion while supporting the slaughter of the unborn.

The denial of the Sacrament “depends on the bishop in a certain region,” Pelosi opined in a 2018 interview with The Washington Post. “Fortunately, for me it has not – Communion has not been withheld and I’m a regular communicant so that would be a severe blow to me if that were the case,” she said.

READ: Banning Nancy Pelosi from Holy Communion is an act of love that could save her soul

Speaking on MSNBC’s Morning Joe, the congresswoman pushed back against Cordileone barring her from the Eucharist, forwarding the specious claim that the Catholic Church is doctrinally opposed to capital punishment and questioning why then proponents of the death penalty are not censured.

“I wonder about the death penalty, which I’m opposed to. So is the Church, but they take no actions against people who may not share their view,” she said in the Tuesday interview.

Cordileone wrote that he had made “many requests” to speak with Pelosi about her support for abortion while presenting as a faithful Catholic public servant, but was largely ignored.

Despite the lack of communication from the Speaker, the archbishop said that he stands “ready to continue our conversation at any time, and will continue to offer up prayer and fasting for you.”

The archbishop also asked the faithful to pray for Pelosi’s “conversion of heart” and that of all pro-abortion politicians.

LifeSiteNews reached out to the Archdiocese of Washington press office for comment but did not immediately receive any reply.