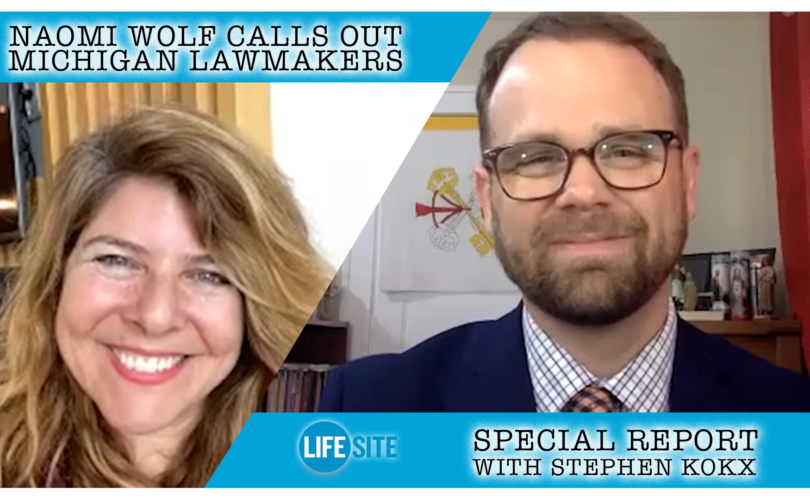 GRAND RAPIDS, Michigan, May 7, 2021 (LifeSiteNews) — In an exclusive interview with LifeSiteNews, Dr. Naomi Wolf expressed support for Michigan House Bill 4667, legislation proposed by State Rep. Sue Allor (R) that would ban vaccine passports in the state. She also rebuked liberal lawmakers and media outlets that have been attacking her in recent days.

Wolf, who is a life-long Democrat, has been a sharp critic of coronavirus passports and vaccines lately. In April, LifeSite reported on a wide-ranging interview she did with conservative Christian radio host Eric Metaxas. At the time, Wolf called out not only COVID injections, but Bill Gates’ involvement in them. She’s previously told Fox News host Tucker Carlson that “we’re really moving into a coup situation, a police state situation, and that’s not a partisan thing.”

In her testimony to the Michigan House Oversight Committee Thursday, Wolf explained that around the world and even in the United States vaccine passport systems are already in place. Wolf gave the example of New York’s Excelsior Pass to demonstrate that they aren’t hypothetical. Experts from Michigan for Vaccine Choice and Michigan Right to Life also testified at the hearing, of which several Democrat lawmakers made light of. You can watch the testimony by clicking here.

Wolf’s remarks have resulted in several media outlets labeling her a “conspiracy theorist.” The Michigan-based Detroit Free Press and The Bridge, as well as PolitiFact, attacked her testimony as “false and misleading statements about vaccines.”

Wolf told LifeSite that such reporting is not only slanderous but unethical. She also said it reminded her of the events that took place in Germany before World War II.

Although not opposed to abortion, Wolf, a one-time adviser to President Bill Clinton who now serves as CEO of tech company DailyClout, has written several books on the loss of freedom in the United States. She’s also appeared on Steve Bannon’s War Room Pandemic.

Currently, the state of Michigan promotes a voluntary “v-safe” smartphone-based program that encourages persons who have received the COVID injection to be in contact with the Centers for Disease Control and Prevention (CDC). Health freedom advocates in the state are concerned the program could be used as a mandatory tracking tool if Democrats gain control of the state legislature.

Michigan’s pro-abortion Democratic Gov. Gretchen Whitmer, once considered a possible candidate for vice president, was named a recipient of a “profile in courage” award by the John F. Kennedy Library Foundation this week for her supposed leadership during the COVID pandemic. Statistically speaking, Michigan has been consistently ranked as the worst state in the nation for how it has handled the outbreak.