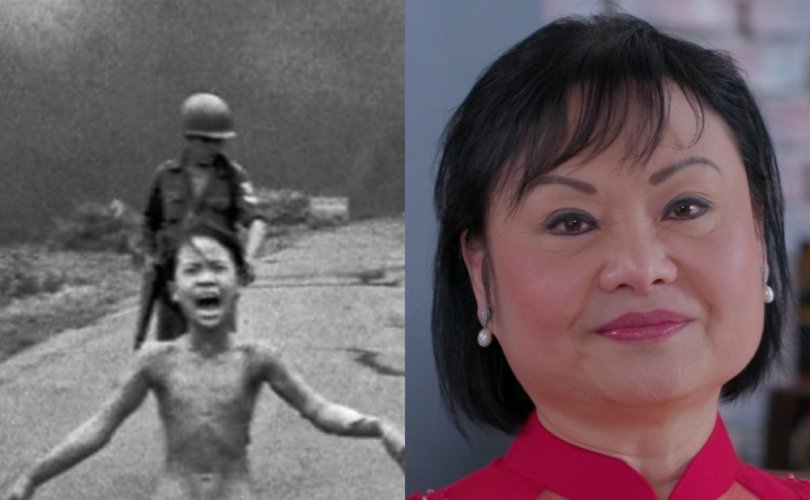 TORONTO, Canada, May 29, 2020 (LifeSiteNews) – The “napalm girl” famously captured in Nick Ut’s Pulitzer Prize-winning 1970s photograph has related her incredible journey from a pagan life of bitterness and hatred to a new life of love and forgiveness through her discovery of Christianity.

On June 8, 1972, South Vietnamese military bombed Phan Thị Kim Phúc’s village. The highly flammable sticky napalm burned Phúc’s clothes and skin as she fled. As the nine-year-old Phúc ran naked and burning from the village, she was captured in a picture by a Vietnamese American photographer, Nick Ut.

The picture, named ‘Napalm Girl,’ became a symbol of the suffering and cruelty of the Vietnam war. When Phúc first saw the photo, 14 months after it was published, she wished it had never been taken. She wondered why the photographer would have taken that picture when she was “in agony,” “naked,” and “so ugly.”

Phúc was sent to a hospital where she underwent more than a dozen surgeries in 14 months.

“I had to deal with the pain every single day,” she said in a video produced by CBC docs.

Phúc related how she built up “hatred, bitterness, and anger” against the people who had done this to her.

“I was just living with the question, ‘ Why me?’ What that happened to me?’”

The pain and unanswered questions led Phúc to want to take her own life ten years later, in 1982.

“I thought that after I die, no more suffering, no more pain,” she said.

“I was in agony. Naked. So ugly. I wish that picture wasn’t taken.” Phan Thị Kim Phúc’s life changed forever when she became known as “the napalm girl” in a Pulitzer Prize-winning photograph.

She offers her Brief But Spectacular take on forgiveness and that girl in the picture. pic.twitter.com/H4zglrxkfk

Phúc was raised in the Cao Dai religion. For years, she prayed to the gods of Cao Dai for peace without receiving a response. She continually asked herself, “Why was I made to wear these awful scars?” Phúc was told that the reason she suffered was because “the life I had lived before my own must have been bad.”

Phúc’s experience made her want to become a doctor. She devoted herself to her studies in an attempt to escape from her suffering. In 1982, while studying in Saigon, Phúc found a copy of the New Testament in a library and began reading the Gospels.

Her life was changed forever.

Instead of taking her life, Phúc decided to become a Christian. That happened at Christmas that same year.

“That faith, it helped me a lot,” she related.

She was captivated by the suffering she read that Jesus had endured in order to bring people like her the possibility of a new life. “I had never been exposed to this side of Jesus—the wounded one, the one who bore scars,” she said.

“His entire ministry, it seemed, pointed to one straightforward claim: “I am the way you get to God; there is no other way but me,” she continued.

Phúc finally “experienced the kind of healing that can only come from God” on Christmas Eve of the same year when she converted to Christianity.

“I realized to myself, ‘Wow, Kim, you pray for your enemies? This means you love.’”

She now says that “forgiveness set my heart free.”

“I forgive everyone who caused my suffering, even the pilot, commander, people controlling me,” she said.

In her testimony on Christianity Today, Phúc declared, “My faith in Jesus has enabled me to forgive those who have hurt and scarred me.”

“Nearly half a century has passed since I found myself running—frightened, naked, and in pain—down that road in Vietnam,” Phúc said. “I will never forget the horrors of that day—the bombs, the fire, the shrieks, the fear. Nor will I forget the years of trial and torment that followed. But when I think about how far I have come—the freedom and peace that comes from faith in Jesus—I realize there is nothing greater or more powerful than the love of our blessed Savior.”

Phúc revealed on Premier Christianity that her scar from the napalm burns reminds her of God’s presence. She described her scar as a mark that God stamped onto her body to remind her of His constant presence. Phúc said the more she prayed, the more peace she felt. She continued, “Every time I touch my scar, I am so thankful.” She referred to her scar as a miracle.

Phúc’s dream is to one day meet the pilot who dropped the bomb on her. While the identity of the pilot is unknown, Phúc hopes that he is still alive so she can one day hug him. She desires to tell him, “I love you. I pray for you. I forgive you.”

“We have to show love, hope, and forgiveness because every person needs that – rich or poor, every human being needs those things,” she said.

“I realize,” Phúc said, “That those same bombs that brought so much suffering also brought great healing. Those bombs led me to Christ.”

After the war, Phúc was used by the North Vietnamese socialist government as a war symbol. Phúc and her husband received permission from the government to travel to Russia for their honeymoon. When the plane stopped to refuel in Newfoundland, they left the plane to escape to Canada. They now live in Toronto with their two children and a grandchild.