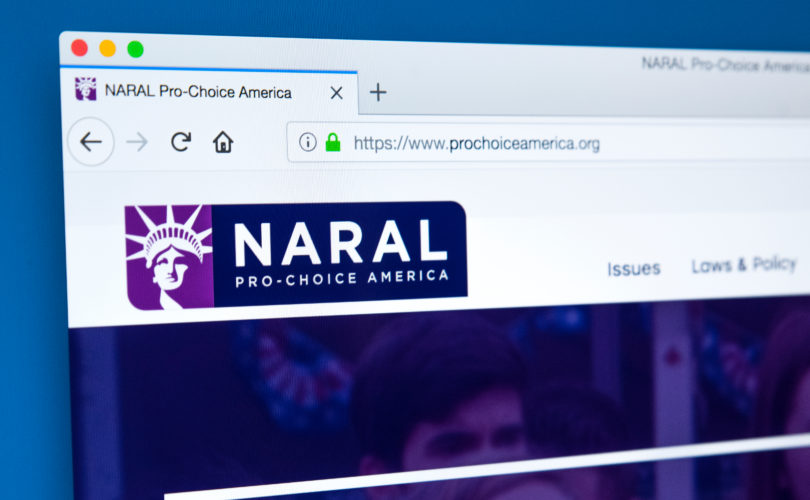 NARAL, one of America’s biggest pro-abortion lobby groups, recently decided to dissolve its 11 state affiliates and bring them under one national umbrella.

NARAL Pro-Choice America “is undergoing some soul-searching as it searches for a new president,” the Huffington Post reported. The latest decision has “fractur[ed] members of the NARAL community and bringing long-simmering grievances and frustrations out into the open.”

The decision comes as a record-breaking number of pro-life laws have been introduced (“2021 Is Already the Worst Year for Abortion Rights on Record,” reads a headline from the pro-abortion site Rewire) and the Supreme Court is set to hear a law that could lead to a reversal of Roe v. Wade.

In May, the nation’s highest court agreed to hear arguments regarding Mississippi’s ban on aborting babies older than 15 weeks. A decision to overturn Roe would supercharge pro-life enthusiasm almost overnight by instantly banning abortion in the handful of states with either pre-Roe bans or “trigger laws” still on the books, and by empowering state legislatures to directly end abortion.

A decision upholding Roe would likely have the opposite effect on pro-life morale while also forcing activists to re-evaluate their current political and legal strategies. Another possible outcome would be a ruling that redefines Roe’s parameters to allow bans at earlier gestational lines while leaving the general “right” to abortion intact.

The pending case, coupled with a number of pro-life laws introduced in states, is creating a tense situation for NARAL.

The pro-abortion Guttmacher Institute said 2021 has been the “worst” year for supporters of the intentional killing of a preborn baby.

“More abortion restrictions — 90 — have already been enacted in 2021 than in any year since the Roe v. Wade decision was handed down in 1973,” the Guttmacher Institute reported.

The new pro-life laws include complete bans on abortion, heartbeat bills that ban abortions when a pre-born baby’s heartbeat can be detected (as early as six weeks), bans on aborting babies specifically because they’ve been diagnosed with Down syndrome, and “trigger laws” that would make abortion illegal if Roe is reversed.

A “Strategic Roadmap” will reorient NARAL to focus on diversity, equity and inclusion efforts.

Several state affiliates plan to break away from NARAL because of the decision to move to a chapter model.

“We are disappointed by this decision, especially as it was made without our input and against our recommendation,” Christel Allen, executive director of the Oregon affiliate, told donors on July 13, according to the Willamette Week.

The Missouri affiliate released a statement condemning the decision but did not make a clear comment on what it planned to do.

“Unfortunately, our national organization, NARAL Pro-Choice America, has made the decision to fully nationalize the organization and disaffiliate all 11 state-level affiliates, including NARAL Missouri,” the Show Me State pro-abortion group wrote. “This decision was made despite protest from affiliates and without regard to the impact this decision will have on communities across the country.”

Some affiliates appeared fine with the decision.

“Regardless of the decisions made in DC, my team in OH will continue to serve people who need abortion care in our state,” Kellie Copeland of NARAL Pro-Choice Ohio wrote on Twitter. “It is a privilege to work with our partners in Ohio and at the other state Affiliates across the country.”

An abortionist named Dr. Bernard Nathanson first started NARAL in 1969 as the National Association for the Repeal of Abortion Laws. Nathanson later became pro-life and converted to Catholicism.

Another founder, Larry Lader, lied about the number of women dying from abortion, settling on 10,000 because he thought it would scare enough people.

“There were perhaps 300 or so deaths from criminal abortions annually in the United States in the sixties,” Nathanson wrote in his book, though “NARAL … claimed to have data that supported a figure of five thousand.”