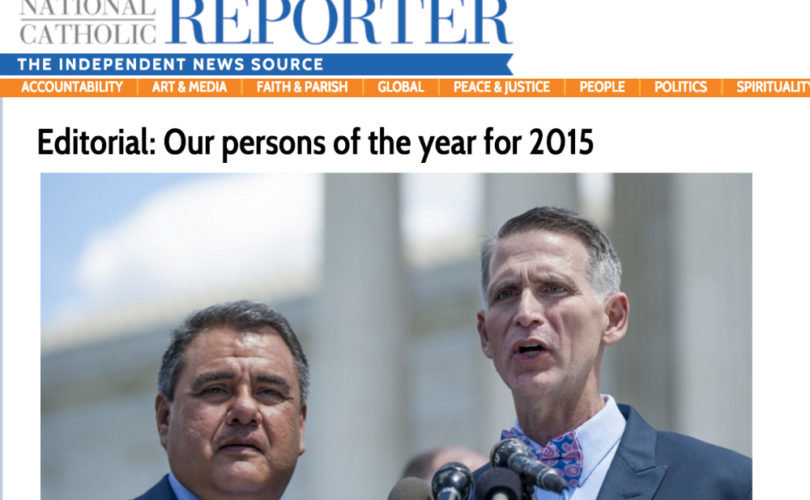 KANSAS CITY, Missouri, January 5, 2016 (LifeSiteNews) – The flagship newspaper for dissident Catholics in the U.S. confirmed its opposition to Catholic moral teaching as the year 2015 came to a close by naming a gay-“married” couple as “persons of the year” for their role in undermining natural marriage.

The National Catholic Reporter hailed the plaintiff couple in the Obergefell v. Hodges case for “their faithful public witness as gay Catholics” in a December 28 editorial.

“One Catholic couple who can — and do — tell the story of the benefits of same-sex marriage are Greg Bourke and Michael DeLeon of Louisville,” the publication asserts, plainly referring to the men’s union as a “marriage” throughout.

The paper cited the men’s longtime relationship and 2004 Canadian “marriage,” along with stating they are lifelong practicing Catholics who are active in their parish and raising children together, and who “by all accounts, have become vital to their community.”

The publication also affirmed it opposes efforts by the Church to uphold its Catholic identity in hiring and employment decisions.

“NCR is already on record advocating for church personnel policies that ensure that employees can enter into legal, civil marriages without fear of losing their jobs,” its article stated.

The time for acknowledgement of sinful lifestyles is over, according NCR.

“Today, we address a more fundamental issue: How will we as a church live with our gay, lesbian and transgender brothers and sisters? We are past the time of ‘love the sinner’ platitudes.”

The editorial continually referred to the advance of the effects of legalized homosexual “marriage” in the aftermath of the Obergefell decision as a “time of change,” and advocated for the bishops of the U.S. to get to know more people in homosexual “marriages,” and, along with “ordinary people,” begin to accept their lifestyle.

“Changing the law was a one-time event. Change comes to peoples and communities slowly,” the editorial said. “As ordinary people — and one hopes Catholic bishops — come to know more people in same-sex marriages, hearts and minds will change. Acceptance will replace fear.”

Aside from dissenting on homosexuality, NCR is well-known for vocal opposition to Catholic Church teaching on women’s ordination, contraception, and other issues, but yet maintains favored access to numerous Church leaders and a paid advertising relationship with Catholic dioceses and parishes.

In 2013, an NCR columnist referred to the unborn child as a “bundle of cells” and questioned why the Catholic Church has worked so much to fight abortion, versus the death penalty.

In January of that year, the paper was told by it’s then presiding bishop, Robert Finn, that it should not present itself as Catholic, due to its editorial stances condemning Catholic teaching and resulting complaints made to him by Catholics.

The following month in 2013, Colorado Springs Bishop Michael Sheridan stood by Bishop Finn’s pronouncement, and called the paper “an embarrassment to the Catholic Church.”

Bishop Finn’s predecessor, Bishop Charles Helmsin, had also instructed NCR to remove the term “Catholic” from its name back in the late sixties, but the paper ignored the bishop’s direction.

NCR said in announcing Bourke and DeLeon as its 2015 persons of the year that they represent the challenge before the Church today, because “they force us to ask not how will we live out a hypothetical situation, but how will we live with Greg and Michael,” and it stated that gay, lesbian and transgender Catholics deserve better, because, “The answers the church is giving now are confused, uneven and often cruel.”