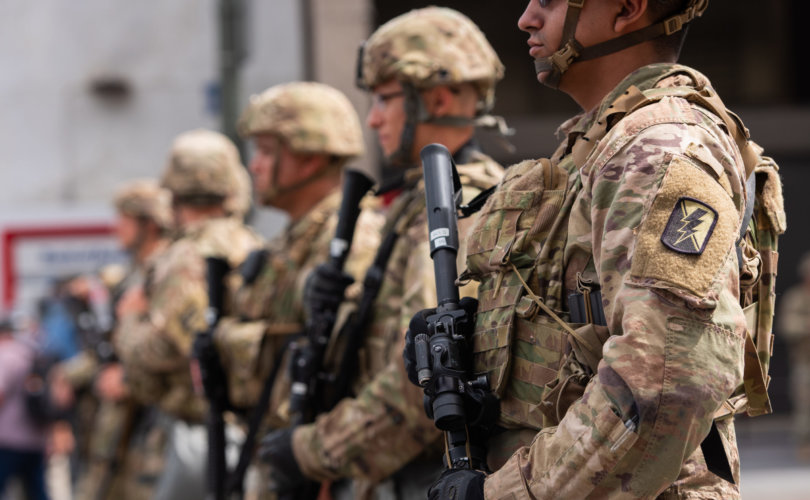 (LifeSiteNews) – The National Guard is set to discharge nearly 14,000 Guardsmen for refusing to take mandatory COVID jabs over the next two years in the face of shrinking recruitment numbers.

Speaking to reporters on Tuesday, Anson Smith, deputy chief of the Army National Guard Strength Maintenance Division, said the Guard is set to begin issuing discharge papers to soldiers who have not taken the jab pending a memo from the Army. About 9,000 Guardsmen are expected to be discharged during the 2023 fiscal year, set to begin on October 1, and another 5,000 during the following fiscal year. The discharges will include Guardsmen who filed medical and religious exemptions from the COVID jab.

The potential discharges come as American armed forces are having trouble finding recruits, with some suggesting that the failed withdrawal from Afghanistan, the insistence of leadership on the COVID jabs in spite of doubts about their efficacy, necessity, and safety, and the influence of leftist politics among military leadership.

The military has attempted to impose harsh COVID policies since President Joe Biden took office. In December, the military began discharging soldiers for refusing the shots, and the deadline for Army Reservists and National Guardsmen to take the injection passed on June 30. The discharges, which threaten to  significantly deplete the manpower of America’s armed forces, have prompted legal challenges that have so far been neglected by the U.S. Supreme Court.

An Army lieutenant was court-martialed in April for questioning the effectiveness masks to stop infections and for refusing to get tested for COVID. The lieutenant, Mark Bashaw, also refused the jab, citing the drastic increase of deaths and injuries from the federal Vaccine Adverse Event Reporting System (VAERS).

The Army, National Guard, and Army Reserve have approved only 32 permanent religious exemptions for the jab out of more than 8,000 requests, according to Department of Defense (DOD) data. Meanwhile, only 44 out of almost 1,200 medical exemptions have been granted.

Guardsmen and Reservists who have refused to take the jab have been barred from participating in drills and training exercises as of July 1.

Republican congressmen asked Biden and the DOD last week to end the military jab mandate, stating that the administration is bringing about a readiness crisis and an “ideological purge” via the jab mandates. The request follows a letter sent to DOD Secretary Lloyd Austin asking that the DOD end its jab mandate in light of new Centers for Disease Control and Prevention (CDC) guidelines about the jabs.

In July, Florida Republican U.S. Rep. Michael Waltzwrote an op-ed for Fox News warning that a depletion in the National Guard over the jab mandate could result in a readiness crisis in light of the ongoing war in Ukraine and the threat of natural disasters.

Biden meanwhile stated in an interview with 60 Minutes that the COVID-19 pandemic is “over” but that the disease is still a “problem.”

Last week, in response to a lawsuit, the Marines rescinded an order that mandated the jabs for all members, stopping all further discharges of Marines who refused to take the jab.