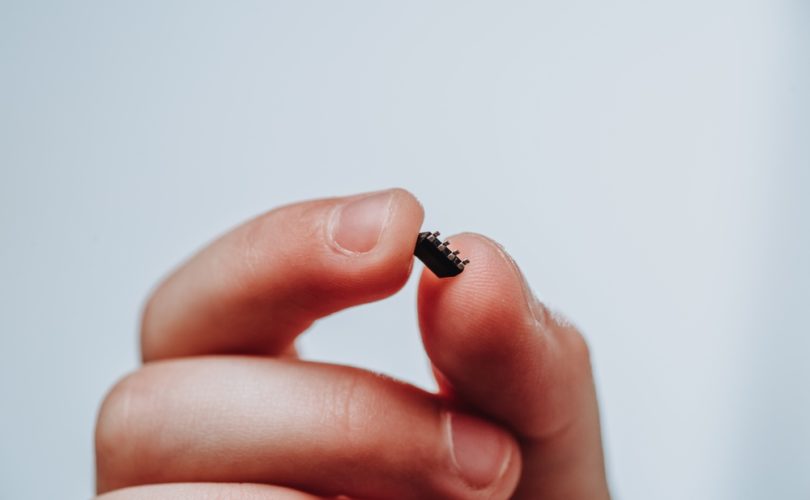 BETHESDA, Maryland, April 15, 2021 (LifeSiteNews) – The National Institute of Health (NIH) has awarded a two-year grant to multinational company General Electric to develop a microchip that can detect the presence of COVID-19 particles.

General Electric has been awarded the grant by the government health agency as the NIH looks to fund development projects for “novel, non-traditional approaches to identify the current SARS-CoV-2 virus.”

The project is to create a device, small enough to fit inside a phone or watch, that can “directly capture, detect, and identify” COVID-19 virus particles. The idea is that the “bioreceptors” would be able to detect particles of the virus, and able to differentiate between them and other particles they come into contact with.

Once the sensors have determined the presence of the virus, they would “automatically” transmit this information “to a touchscreen or other digital device.”

General Electric’s New York based team is led by one of their principal research scientists, Radislav Potyrailo, who hailed the project as creating one of the “first lines of defense.”

“The holy grail is to detect a single virus particle,” he said.

Potyrailo’s team is thus designing a “digital bloodhound,” a “microchip smaller than a dime with nanowells, or tiny pores, that can only be activated by a particular molecule — in this case, a molecule from the coronavirus causing COVID-19.”

Each of the nanowells will contain “bioreceptors” which would only be activated upon recognition of the virus particles that they were designed for.

Despite the small size of the sensors, Potyrailo declared that they would have “the same detection capabilities as the high-end analytical instruments the size of a microwave oven.”

Although the initial focus is on using touchscreen devices to collect such data due to their exceptionally widespread usage in every day, the technology is not limited merely to phones. The NIH predicted that it could be “integrated into keyboard, mouse and other frequently touched surfaces.”

Additionally, the sensors could be built into “the surface of specialized virus detectors,” which would thus be used in public places to detect presence of the virus “in respiratory droplets in the air.” Envisaging the sensors being as commonplace as fire alarms or smoke detectors, the NIH proposed that they could be installed in locations like “senior living centers, hospitals, airplanes, and meeting spaces.”

The technology would thus become a part of daily life, and “other digital apps for health and disease conditions will capture the immediate impact of viruses or other pathogens on health and behavior in real-time.”

While General Electric’s project has made the news headlines, the company is by no means on its own in being tasked with developing technology that could force people to have their surroundings and health constantly monitored. The NIH has predicted it would fund projects up to a total of $10 million.

A number of other, similar projects are being funded by the NIH, focussed on creating sensors for the detection of COVID-19.

The University of Washington, is also developing a “touchscreen-compatible,” virus sensing device, after being awarded $466,500 from the NIH.

Emory University has received $449,696 to develop technology for “automatic surveillance and tracing of airborne” COVID particles. This would be based on “‘Rolosense’ technology” which is a “DNA micromotor” to detect the virus, and can be seen by a normal smart phone camera connected to an app, providing “both geographical tracing and surveillance.”

Washington University in St. Louis has accepted a grant of $433,266 to develop an “electrochemical biosensor,” which would detect airborne particles of COVID-19, as well “other and future pathogens.”

These, and many others, are all part of the NIH’s “Rapid Acceleration of Diagnostics (RADx) program,” which has been drawn up to accelerate development and roll-out of novel technologies for COVID-19 testing.

As a further sub-group of this initiative, NIH also launched the “RADx Radical (RADx-rad) initiative,” which is focussed on using new or existing technologies in unique ways, including “unconventional screening, biological or physiological markers, new platforms, and point-of-care devices.”

The RADx-rad, whilst initially drawn up under the guises of detecting and sharing information about COVID-19, will also be used with reference to “other, yet unknown, infectious agents.”

Concerns regarding privacy and potential breach of human rights are not hard to imagine, as all data collected by the various projects are sent to a newly created “hub” – the Data Coordination Center (DCC) – and then in turn to the larger NIH framework. This would include information from the sensors themselves, but also data from “public sources” such as census data, electronic health records, and administrative data.

The DCC will additionally co-operate with other “large-scale COVID-19 research efforts,” by sharing its own harvest of data.

Such revelations come alongside the Pentagon’s own invasive technology in the state funded drive for the recording and tracking of individual’s health and daily life. Scientists from Defense Advanced Research Projects Agency (DARPA), have manufactured a gel tissue-like substance, which is to be inserted underneath the skin.

The insert would “continuously test your blood,” and react with substances in the body, to emit a low level light, visible to a sensor or a smart phone app.

Dr. Kayvon Modjarrad, a scientific researcher based at the Pentagon, echoed the peculiar comments expressed in the various grants awarded by the NIH, claiming that they were working on technology and vaccines which would be universally effective: “We’re trying to not just make a vaccine for this virus, we’re trying to make a vaccine for the whole family of coronaviruses.”