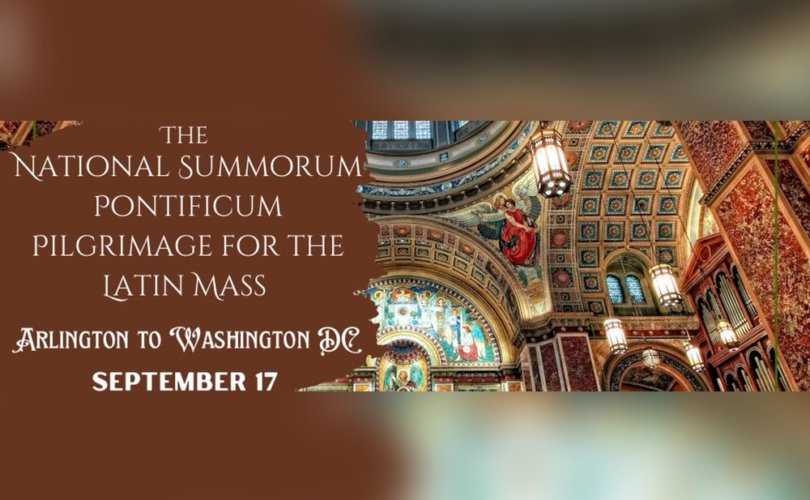 (LifeSiteNews) – Catholics will embark on a five-mile walking pilgrimage from the Diocese of Arlington’s cathedral to the Archdiocese of Washington’s cathedral on September 17, 15 years after Pope Benedict XVI’s Summorum Pontificum, which Pope Francis abrogated with Traditionis Custodes, came into effect.

The pilgrimage will start outside the Cathedral of St. Thomas More in Arlington at 9:00 a.m. The walk into Washington, D.C. is expected to take around two hours. Those unable to walk the full route are encouraged to be outside St. Matthew’s by 11:00 a.m. to greet the pilgrims and join in prayer. Brunch will follow.

The motivation behind the pilgrimage “is first to make a public show of gratitude to God for having had 15 years of Summorum Pontificum, which allowed so many of us (including me) to experience and fall in love with the Traditional Latin Mass,” organizer Noah Peters told LifeSiteNews via email. “The TLM deepened my Catholic faith immeasurably, and I cannot imagine not being able to pass it on to my children.”

It‘s happening. Join us September 17 at the Cathedral of Saint Thomas More in Arlington. You will not want to miss out on this. pic.twitter.com/vSHWOsJ97I

Pope Benedict XVI issued Summorum Pontificum on July 7, 2007 and it went into effect on September 14, 2007.

The crackdown on the Traditional Latin Mass in Arlington means that the 21 places in the diocese where the Old Mass is currently offered will shrink to just three parishes – with five additional authorized locations, two of which are historic or former church buildings and three of which are schools. Washington, D.C.’s Cardinal Wilton Gregory has all but abolished the Old Mass completely, decimating historic parishes. Church closures in the archdiocese as a result are very likely.

The pilgrimage’s website notes that in addition to the greater Washington, D.C. area, the Traditional Latin Mass is being suppressed “in many other places throughout the world.” The pilgrimage will be “a public act of sorrow for the destruction of the Western liturgical patrimony, and in support of its full and immediate restoration.”

— Article continues below Petition —
PETITION: We won't give any money to liberal bishops who attack the Faith
Show Petition Text
12154 have signed the petition.
Let's get to 12500!
Thank you for signing this petition!
Add your signature:
Show Petition Text

“We just want to be able to worship at the same Mass that nourished saints and martyrs throughout the ages,” said Peters. “Pope Benedict XVI affirmed that the TLM had never been abrogated and could never be abrogated. Now, we fear that it may be totally banned in a matter of years, seemingly out of spite for those who attend it.”

“Many are also upset and outraged over how our community is being treated – forced out of our parish churches and communities and into designated non-church spaces, forbidden from advertising the TLM in the parish bulletin and on the internet. It is deeply disturbing, and deeply un-Catholic, that, instead of encouraging people to attend Mass, get married, and have their babies baptized in the Old Rite, Catholics are being blocked from these sacraments.”

He added, “We all know so many people who have fallen away from the faith. I just came into the Church in 2020 as a convert. We all know about the power of the TLM to convert people or bring Catholics back into the faith. How can I explain this to my friends who might be interested in the TLM or in converting to Catholicism? As Pope Benedict XVI noted, a Church at war with its highest and holiest traditions calls its very reason for being into question.”

Peters said the response to the September 17 pilgrimage has been “overwhelmingly positive.”

“We both anticipate and encourage people from other parts of the country to come – especially TLM communities in Pennsylvania and other parts of Maryland and Virginia,” he told LifeSiteNews.

‘Profound sense of loss and grief’

Seven months ago, Peters wrote an open letter to Arlington Bishop Michael Burbidge, noting “Out of any diocese in America, the Diocese of Arlington stands as perhaps the greatest success story of Pope Benedict’s Summorum Pontificum…At a time when Mass attendance is in steep decline across the globe, these traditional masses draw large gatherings of faithful Catholics, many young and with large families.”

“Far from being isolated and hostile ‘groups,’ secluded from parish life and rejecting the authority of Vatican II, we are well-integrated into our parish communities and fully accepting of the authority of Rome and the magisterium of the Church.”

We have been devastated to learn of restrictions on the celebration of the Traditional Mass and sacraments. We do not believe that the conditions that led the Holy Father to promulgate Traditionis Custodes apply in any way to the Diocese of Arlington. Traditional Latin Mass attendees in this diocese are marked by deep reverence and love for the Church and a burning desire to live our Catholic faith as fully as possible, not a sense of disunity and schism.

We feel a profound sense of loss and grief at the prospect of losing the ability to celebrate the Mass and other sacraments in the Old Rite. At a time when there is so much darkness and despair in the world and in our country, we find the Extraordinary Form of the Mass to be a beacon of light and hope – one which touches our hearts and nourishes our Catholic Faith.

Peters delivered that open letter, which at that time had nearly 2,500 signatures from people in the diocese, to Burbidge on January 31, 2022. It has now reached 3,631 signatures.

On July 27, Peters wrote for Crisis magazine about the plight of one parish in the nation’s capital, St. Frances de Sales, in the wake of the cardinal’s edict abolishing their well-attended Old Mass:

Last Sunday, St. Francis’ priest assured his flock, most of whom were children: “You have done nothing wrong. You did not deserve this.” I was reminded of the moment I learned of my parents’ divorce, when I was the same age as many of the children in the congregation. I cried endlessly, thinking that my world was coming to an end and wondering whether it was my fault. Now, Church authorities are inflicting a similar trauma on these children, who face the loss of their church community and their Mass. The families of St. Francis de Sales face a future where their beloved Mass will be gone and their church community broken apart.

Peters, who is a lawyer by day, has also been organizing weekly rosary rallies outside the Washington, D.C. nunciature – every Saturday at 10:00 a.m.

So many graces at the Rosary Rally today – a new record in crowd size, beautiful songs and prayers, the building and strengthening of friendships and community. Christus Vincit – the TLM is unstoppable! pic.twitter.com/1YPOaXpHEx

“I started organizing them after the restrictions from Arlington were announced on July 29,” he told LifeSite. “The response has been tremendous, as has the fellowship. I have already met several lifelong friends from the Rosary Rallies. We have gotten tremendous support from high-profile Catholics like Taylor Marshall, Peter Kwasniewski, and Damian Thompson. These rallies help us pull together as a Catholic community during difficult times. And we must flood heaven with our prayers for an end to these cruel and unjust restrictions on the sacred liturgy.”