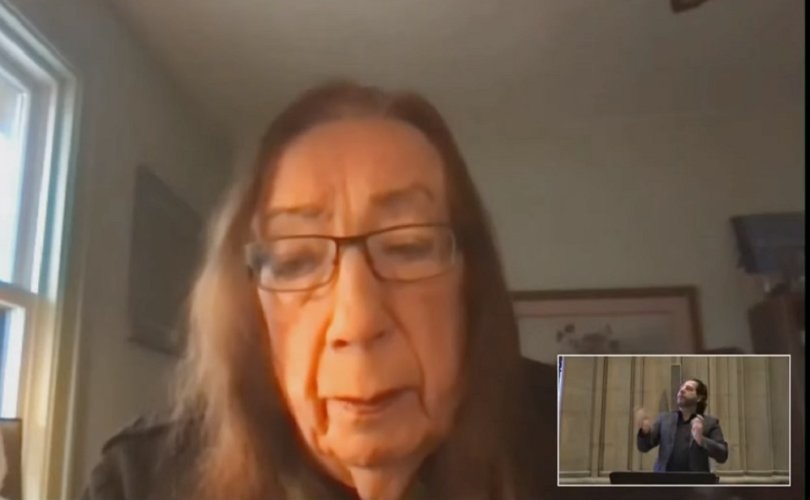 January 21, 2021 (LifeSiteNews) — An “inaugural interfaith prayer service” was hosted today in Washington, D.C.’s National Cathedral to “honor” the first full day of Joe Biden’s presidency. Both Biden and Kamala Harris “attended” the event virtually, with their respective families, from the White House.

After a lengthy opening sequence comprising organ music and panning shots of the cathedral, Episcopal “bishop” Mariann Edgar Budde removed her mask to welcome Biden and Harris to the service, as well as their families and “all who seek the common good of the United States of America.” Cathedral administrators said a brief prayer, followed by a highly stylized rendition of “The Star-Spangled Banner” sung by Patti LaBelle.

Appearances were made by leaders of numerous faiths, mostly Christian, all through internet video calls from their own places of worship. Greek Orthodox archbishop Elpidophoros prayed that the president might rule with “a keen sense of justice, so that all Americans can have confidence that their rights as citizens will always be defended and protected.” He added that the new administration should “safeguard and preserve our republic, our Congress.”

Appearing in front of a large rainbow flag, Rabbi Sharon Kleinbaum shared a reading from Deuteronomy, including a passage that makes reference to the Israelites welcoming strangers. A second female rabbi, Sharon Brous, said that “in the midst of pandemic, in the shadow of violent insurrection we lift up the ancient Jewish promise that after the long night of suffering, a redemptive dawn will come” before adding that “we stand now at the inflection point between that tearful night and the joyous new day.”

In reference to the newly sworn in administration, Brous asked God to give the American people strength to “usher in the dawn of a new America: a justice driven, multiracial democracy.” Despite Biden’s moves to overturn the pro-life policies enacted by the Trump administration, Brous determined that the “new America” will affirm “that every one of us deserves to live in full dignity.”

She closed out her “prayer” by asking that Americans prioritize “healing, protecting, and sustaining the earth,” as well as abolishing “the heresy of white supremacy.”

The Catholic Church had representation at the “ecumenical” event in the person of Sister Carol Keehan of the Daughters of Charity of St. Vincent de Paul. Keehan, who also serves as the CEO of the Catholic Health Association, was accompanied by one other Catholic nun later in the prayer service. Sister Norma Pimentel, who is director of Catholic Charities of the Rio Grande Valley, has been recognized by Pope Francis for her work with refugees and immigrants.

While some more choral music played, the camera showed Biden, Harris, and their families, sitting physically distanced and masked, watching from a room in the White House.

Immediately following the intermission, president of the Muslim Community Network Dr. Debbie Almontaser pronounced a reading from the Koran: “to him [Allah] belongs the kingdom of the heavens and the earth, and to Allah all matters are returned […] believe in Allah and his messenger.” Such pronouncements directly conflict with the teaching of the Gospel to which Biden professes belief.

Common themes running through the prayers were for unity, compassion, and healing; against racism; for the people on the margins of society, those with COVID-19, and those “whose lives are closely linked with ours.”

Many Christian pastors subsequently spoke in foreign languages as they made their petitions, often donning rainbow-colored “stoles” and other clerical garb, be they male or female.

The prayer service also featured a man calling himself a woman: the faith work director for the National LGBTQ Task Force, “Barbara” Satin. Satin delivered a short prayer for the military. It is unclear what faith Satin represented. Additionally, there was an appearance from “trans” rights activist and pastor of Left Hand Church Dr. Paula Stone Williams, another man who purports to be a woman.

Appearances were made by representatives of the Sikh community, who prayed that “in the name of divine oneness, we find ever rising high spirits.” There were also Krishna and Navajo representatives.

Something resembling a sermon was delivered by Bishop William J. Barber of the “Repairers of the Breach.” Speaking on the prophet Isaiah and the conditions he lived in, the pastor said that, like Isaiah, “bad leadership, greed and injustice, and lies” led the people of America into “trouble and economic hardship.”

“Choose first to repent of the policy sin, and then repair the breach,” Barber said. The breach, he explained, is the “gap between what is and how God wants things to be,” specifically giving mention to racial and economic divides in the nation.

Addressing Harris directly, Barber said, “You have known the political and social breach caused by racism.” Then, speaking to both Harris and Biden, Barber “reassured” listeners that “both of you [Biden and Harris] know that the only way forward is for the breaches to be repaired.”

In a clear reference to the outgoing Trump presidency, Barber declared that Biden could “restore old ruins, rebuild and renovate, and make the community liveable again.”

The final musical intermission was performed by Josh Groban, accompanied by a Gospel choir, who sang “America the Beautiful.”

Budde closed the service out with a final word of encouragement to Biden and Harris, saying “Stand firm in your faith … and let all you do be done in love.”

In all, 33 faith leaders offered prayers of thanksgiving and support to Biden and Harris on assuming office.