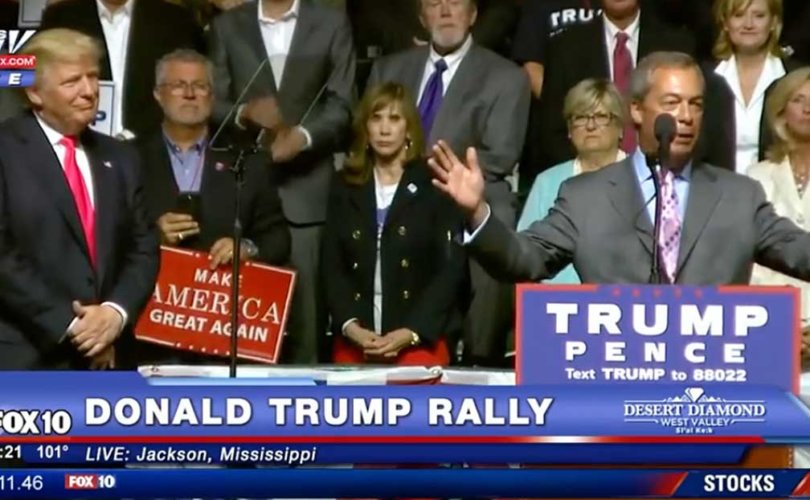 May 27, 2019 (LifeSiteNews) ― The European Union has 28 member states and the results so far of its four-day parliamentary election results do not make for simple narratives.

There are, however, some interesting stories to tell as the final totals are tallied.

The headlines in the United Kingdom are dominated by the success of UKIP founder Nigel Farage’s six-week-old Brexit Party, which received 31.7 percent of the vote. The Euroskeptic Party was trailed by the center-left Liberal Democrats at 18.5 percent, leaving both Labour and especially the ruling Conservative Party in the dust. It is widely believed that the British public, impatient after months of unsuccessful negotiations over the UK’s withdrawal from the European Union, voted for Farage to punish the traditional governing parties.

The shine on the Brexit Party was dulled in Scotland, however. where it came in a distant second. Scotland’s socialist Scottish National Party (SNP) received 37.4 percent of the vote and the Brexit Party captured 14.8 percent. This means that the leader of the SNP, Scotland Premier Nicola Sturgeon, believes she has a mandate to launch another separatist referendum in hopes of removing Scotland from the United Kingdom. However, of the six Scottish members of the European Parliament, only three are from the SNP. One is a Liberal Democrat, one is Conservative, and the third is a member of the Brexit Party.

Another interesting story concerns the rise in support for Poland’s mildly Euroskeptic, populist Law and Justice Party (PiS), which so far has had its best-ever result at 46 percent. According to Polish pro-life leader Jacek Kotula, who is a PiS member of the Podkarpackian regional government, PiS’s success can be explained by their record.

“PiS won because they fulfilled almost all of their election promises and take care of ordinary Poles, not the rich,” Kotula told LifeSiteNews, via social media, in Polish. “It’s good for Poland because they are people who above all think about Poland’s interests, patriots, and Christians.”

Kotula told LifeSiteNews that the Polish left attempted to capitalize on the sufferings of victims of clerical sexual abuse in their European Union parliamentary campaign.

“They wanted to blame PiS for the protection of pedophiles in the Church,” he said. “But (party leader Jaroslaw) Kaczyński took that weapon from their hands by swiftly proposing in the Sejm (Polish parliament) an act increasing the punishment of all pedophiles to 30 years in jail. The opposition was not prepared for this scenario and did not vote for the heavier penalty.”

“The opposition wanted to discuss pedophilia, but only among priests and not among teachers, celebrities or actors,” Kotula continued.

A third story concerns solid support for populist, nationalist conservative parties in Austria, Bulgaria, France, Hungary, and Italy. In Austria, the nationalist, anti-illegal migration Austrian People’s Party is reported to have received 39.4 percent of the vote. In Bulgaria, the conservative, populist, and yet pro-European GERB party is reported to have won the largest vote with 30.9 percent. In France, Marine LePen’s National Rally, formerly known as the National Front, has been credited with 23.3 percent of the vote, far ahead of Emmanuel Macron’s ruling “La République En Marche!” Party, which has only 11.5 percent. In Hungary, a coalition of Prime Minister Viktor Orbán’s FIDESZ party and the Christian Democratic People’s Party received a whopping 52.3 percent. In Italy, Matteo Salvini’s Lega Nord dominated with 34.3 percent of the vote.

However, it would be inaccurate to say that there have been conservative gains across Europe, when socialist parties won overwhelmingly in Portugal (33.4 percent) and Spain (32.8 percent).

This year’s European Parliamentary elections took place between Thursday, May 23 and Sunday, May 26.