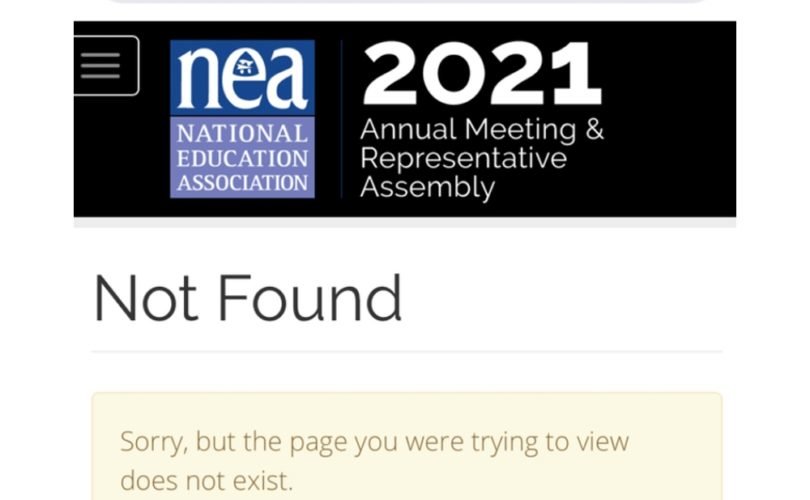 WASHINGTON, D.C., July 7, 2021 (LifeSiteNews) — Just days after publishing an expansive plan to promote critical race theory throughout the U.S., the largest teachers union in the United States has removed the scheme from its website following negative press coverage.

“The teachers union has made critical race theory its #1 priority—and want to implement it nationwide,” conservative writer and filmmaker Christopher Rufo tweeted.

Rufo, who has worked to expose and fight CRT through his writings and films, described the theory as “a radical ideology that seeks to use race as a means of moral, social and political revolution.”

The plan to promote critical race theory in schools was published on the NEA’s website and generated considerable backlash from conservatives. Many observed that critical race theory traces its roots to Marxist ideology, and some, like Rufo, pointed out that the NEA’s plan stands as an admission that CRT is being taught in K-12 classrooms after persistent denials from teachers that the theory is either nonexistent or confined to graduate level legal studies.

Then, mere days after the plan was made public, the NEA quietly removed the document from its website.

Jessica Anderson, executive director of Heritage Action, a conservative policy advocacy group affiliated with the Heritage Foundation, tweeted out the news in the late afternoon July 6.

3 days after their annual meeting concludes, @NEAToday, the nation’s largest teacher’s union, scrubs the agenda items announcing their nationwide campaign to push CRT from their website.

Why are they covering up their support for CRT? �� pic.twitter.com/uWZomRt2dV

Anderson included a screenshot of the page, which now says “Sorry, but the page you were trying to view does not exist.”

The original link to the business item now takes users directly to the NEA’s homepage.

“Why are they covering up their support for CRT?” Anderson asked.

Per LifeSite’s previous reporting, the teachers union’s newly redacted plan aimed to use existing media to promote teaching “truthful and age-appropriate accountings of unpleasant aspects of American history, such as slavery, and the oppression and discrimination of Indigenous, Black, Brown, and other peoples of color.”

The plan explicitly approved the use of critical race theory, adding that “it is reasonable and appropriate for curriculum to be informed by academic frameworks for understanding and interpreting the impact of the past on current society, including critical race theory.”

The NEA’s declaration contradicted claims that CRT is simply a legal theory taught in graduate programs and not to children in public schools.

On July 1, NBC reported that “teachers nationwide said K-12 schools are not requiring or pushing them to teach critical race theory.”

“[R]esponses from more than 1,100 teachers across the country … appeared to suggest that the panicked dialogue on critical race theory made by lawmakers and the media does not reflect the reality of American classrooms,” NBC reported.

However, the NEA’s plan clearly outlined its intent to “provide an already-created, in-depth, study that critiques empire, white supremacy, anti-Blackness, anti-Indigeneity, racism, patriarchy, cisheteropatriarchy, capitalism, ableism, anthropocentrism, and other forms of power and oppression at the intersections of our society,” and stated the union’s opposition to “attempts to ban critical race theory and/or The 1619 Project.”

K-12 classrooms are not the only habitats for critical race theory. The ideology has infiltrated corporate boardrooms, university lecture halls, and even some churches. Conservatives have observed that CRT bears many of the hallmarks of religious adherence, with National Review’s Michael Brendan Dougherty calling it “a metaphysical and moral worldview.”

“If public-school teachers are determined to use their positions to confront ‘cisheteropatriarchy’ and to help people identity ‘shame’ with ‘whiteness’ — then it’s probably time to admit that education is an induction into a metaphysical and moral worldview,” Dougherty wrote.

“Just as in the medieval era — perhaps just as in all eras — the wrong belief is believed to be the cause of injustice, therefore the wrong belief threatens the entire commonwealth,” Dougherty said, observing ‘(t)he project of ‘disrupting white culture’ sounds like an exorcism.”

Rufo retweeted a link to Dougherty’s article, calling it “excellent” and summarizing Dougherty’s analysis of critical race theory in his own words as “racial metaphysics.”

To date, more than half of all American states have moved to restrict or ban CRT in the classroom.

Prior to the NEA’s removal of its CRT plan from its website, the union admitted its scheme lacked funds for implementation, falling short by $127,600.