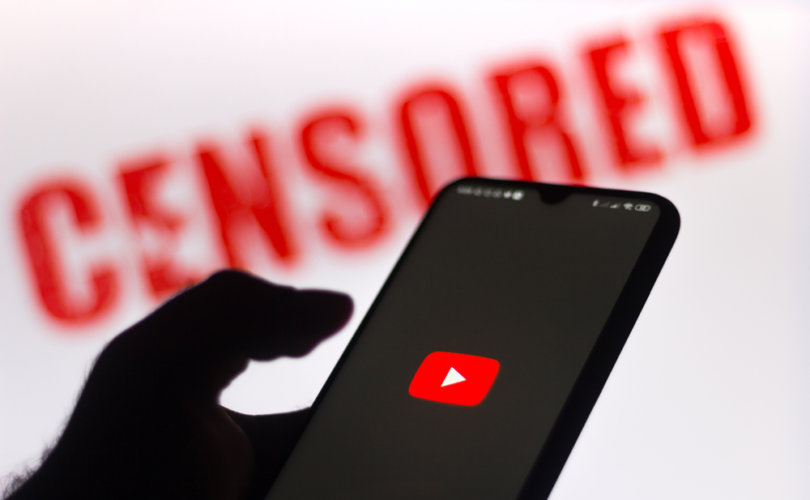 February 12, 2021 (LifeSiteNews) — LifeSite has launched a new campaign calling upon state lawmakers across America to introduce legislation that regulates Big Tech’s unchecked power and protects the citizens of their states from unfair targeting, censorship, and cancel culture.

With Big Tech’s premeditated, ongoing purge of conservative, libertarian, and Christian voices from their monopolistic platforms now in full-swing, it was only natural that LifeSite would inevitably fall victim to its censorship sooner or later.

And indeed, it was sooner: Just Wednesday, YouTube, the multi-billion-dollar video platform and Google subsidiary, permanently removed LifeSite’s channel, which had more than 300,000 subscribers and 2,000 videos, providing neither warning nor explanation.

And while LifeSite is merely the latest entry in a long list of Big Tech’s targets for cancelation, it’s now abundantly clear that these companies’ sole mission is to stifle free speech and silence any individual or organization that expresses beliefs, ideas, and values counter to what they’ve deemed “socially acceptable.”

With the new federal government all-but-complicit in this agenda, the only path forward in fighting back against Big Tech tyranny is for state governments to take an active role in safeguarding the First Amendment rights of their people.

Thankfully, there is already one shining example of a state government willing to take on Big Tech.

Florida has already asserted itself as the nation’s foremost leader on this front, with Gov. Ron DeSantis (R) introducing a new set of regulations to curb Big Tech’s power over Floridians who use their platforms.

These policies are neither unreasonable nor restrictive; rather, they are essential for people in all 50 states to maintain and exercise their God-given, constitutionally-guaranteed right to speak up, speak out, and, most importantly, be heard.

LifeSite’s campaign encourages all states to follow Florida’s lead as millions of Americans face unprecedented attacks on this most basic of individual liberties.

Big Tech has become the authoritarian left’s most valuable ally outside of government, and their dystopian-style silencing of millions of American voices can only expand in size and scope if we don’t act now.

It’s 2021, not “1984.” Yet even so, these times demand prompt legislative reaffirmation of our rights, or there will be nothing left to reaffirm at all.