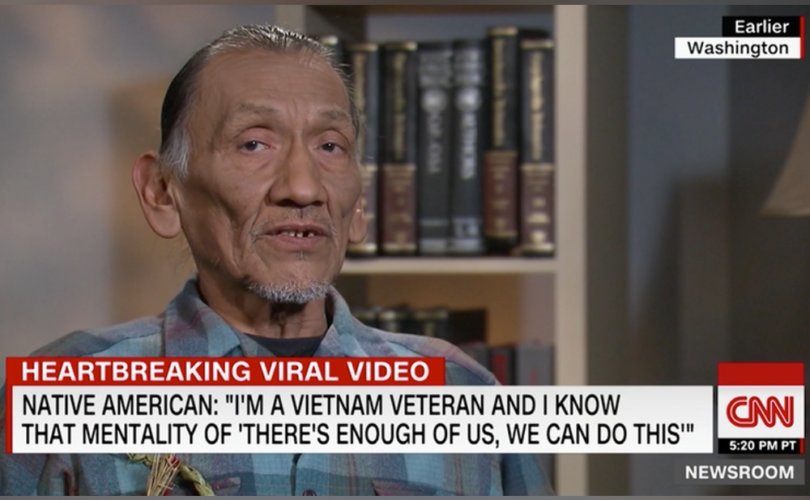 Washington, D.C., January 31, 2019 (LifeSiteNews) – The Native American activist reported by the media to be harassed by Catholic high school boys led some 50-plus protesters the very next day in an attempt to disrupt Mass at the Basilica of the National Shrine of the Immaculate Conception in Washington D.C.

Roughly 24 hours after Nathan Phillips had his confrontation with Covington Catholic High School students after he approached them while attending the Indigenous Peoples March near the Lincoln Memorial, Phillips and a larger group tried to enter the Basilica “while chanting and hitting drums” in the middle of Saturday evening Mass.

Video and eyewitness accounts of the incident recount tension, anger, and disdain for the Catholic Church, as well as demands for land reparations from the Church and reprimands of Covington Catholic High School students – now and in the future if they go to college.

“In respect and reverence for the Mass, the individuals were not permitted to enter the Basilica due to the disruption it would have caused during the solemn Mass,” the Basilica said in a statement to Catholic News Agency (CNA). “The individuals were asked to leave the property after it was determined they did not intend to share in the celebration of Mass.”

CNA has covered the incident in successive reports, as information continually became known. Original estimates for the number of protestors were at 20 but that was the number trying to enter the church with some 50-60 protesters estimated overall. One of the demonstrators posted video footage of the incident on social media, and the Canadian Broadcast Corporation (CBC) released some as well. CNA ran down the sequence of events from the various sources in its reports.

“It was really upsetting,” a Basilica security guard told CNA. “There were about 20 people trying to get in, we had to lock the doors and everything.”

The guard had said the incident was a disappointment during a busy and joyful weekend for the Shrine (with the March for Life).

“We had hundreds and hundreds of people from all over the country come here to celebrate life, to celebrate each other together,” the guard said. “That a protest tried to come inside during Mass was really the worst.”

The guard reported that the situation was “tense.”

“I’m just really grateful that nothing too bad happened,” the guard said, “they were really angry.”

The Basilica security said further the incident was especially distressing for him because Mass was in progress.

“It’s a house of worship,” he said, “a place of prayer where people come to celebrate. All this anger is so against what we are all about here.”

The guard said that he’d never witnessed anything like it during his whole time of working for the Basilica.

“I don’t know the details of what happened on Friday [after the March for Life],” the guard said, “I wish I did. All I know is it’s a shame, and it’s got nothing to do with why people were here.”

“And this all happened on our biggest event of the year,” he added. “I hope we never see it again.”

The protest group had gathered across the street from the Basilica before heading toward the main entrance, chanting and playing drums.

'I’ll watch for the cops'

As the group including Phillips readied to approach the Basilica’s main steps, one participant stated that they would march to the front of the church for “a non-violent peaceful action.”

Another participant advised the group that if they want to enter the Basilica, they can if they do so “in small groups” to pray.

“Just say you are going to Mass,” a third added, before another demonstrator noted the Basilica is “a public space.”

“I’ll watch the cops,” one protester said as they began walking.

Then the group, led by Phillips, chanting and playing drums, climbed the Basilica’s front staircase.

A smaller group of the protesters attempted to enter the Basilica, while the larger group – by some estimates, 60 people – continued to climb the front stairs then stopping at a landing.

The smaller group of protesters who’d attempted to enter the Basilica was then seen on the video returning to the larger group.

A seminarian from California, whom seminary officials forbad from being identified publicly, recounted what he’d witnessed for CNA.

“I was outside when the protesters were coming up the steps of the Basilica,” he said. “I was curious because of the noise and chanting.”

“At first I didn’t take it too seriously,” the seminarian said, “but as they came up the steps we were told to go inside. I was with a group of people from California there for the March for Life. The security people shut the doors and locked them.”

“I was inside and the protesters were banging on the doors,” he said.

Phillips read a statement outside on the Basilica steps.

We demand that the students of Covington Catholic High School be reprimanded not just by their school officials but, as seniors, by their upcoming universities.

We demand that the Catholic Church hold itself responsible for the [indistinct] hundred-plus years of genocide that indigenous peoples have endured and endure persistently by implementing the following: with reparations of land and restorations to the indigenous peoples in the U.S. and across the world.

We demand that the Catholic Church revoke the papal bulls related to the doctrine of discovery, which laid the foundation for religious prejudice and the dehumanization of indigenous peoples.

Several Basilica security guards are shown on the video standing between the protest group and the church entrance.

The seminarian said that inside the Basilica, shrine visitors and those at Mass could not leave at first, whether through the main doors or the different side exits, because of the situation.

“We couldn’t leave from there either,” the seminarian said, referring to downstairs and side doors. “There was more security that told us it was not exactly safe to leave at that point.”

His group was not able to leave the building for another 20 to 30 minutes, he recalled, stating, “It was about 30 minutes before the police were able to contain the situation and disperse the protestors.”

Police officers responded to a call at the Basilica’s address at 6:27 pm on Saturday, a DC Metro Police spokesperson had confirmed.

After Phillips read his statement, the video shows a participant telling the group, “We need to get off the premises, we have been informed by police that we need to get off our occupied indigenous territory.”

“We came here, we sat, we made peaceful ceremony,” the protester said. “We showed the Catholic Church how to respect prayer, how to respect ceremony. It’s not even their land and we still showed respect.”

“Right now we are going to head out with the AIM (American Indian Movement) song to make sure nobody gets arrested or hurt,” the protester said.

CNA had not been able to confirm with the Lakota People’s Law Project, the other group behind the Indigenous Peoples March Phillips had been attending Friday when he confronted the Covington Catholic students, whether the group officially sanctioned the Basilica demonstration.

The CBC report said around 60 people were present outside the Basilica to support Phillips Saturday night, but did not include in its report that part of the group had tried to disrupt the Mass.

CBC video showed one supporter saying that the group had gathered at the Basilica to listen to Phillips, to hold the Catholic Church “accountable” for the Covington Catholic High School students alleged actions, and for the “colonial violence that the Catholic Church reproduces every day.”

The Facebook video posted by one of the participants ended with a protester stating:

It’s cold, but you know what the cold, the rain, the snow, whatever, it ain’t gonna stop us. We’re gonna get out here and let our voices be heard. Whether it be at a Catholic Church, it don’t matter, Catholic school, whatever.