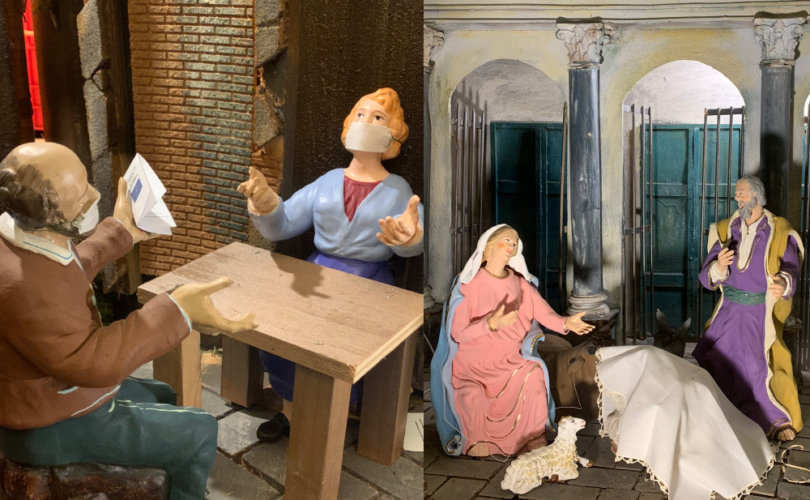 ROME (LifeSiteNews) – The ancient Catholic Basilica of Santa Maria in Trastevere, Rome, has set up a nativity in which some figurines wear masks and show their vaccination certificates, in a scene which has been dubbed “unnecessary nonsense.”

The Nativity scene at Santa Maria in Trastevere: Mary and Joseph waiting in front of a model of the church, while those nearby are masked and showing their green passes – vaccinated or COVID negative. pic.twitter.com/SjyTGyqV8u

The crib shows the traditional figures of Mary and St. Joseph with the Christ child (covered until Christmas), while nearby travelers at an inn are seated wearing face masks, with some holding vaccine certification documents.

“The theology of the green pass and of the politically correct also in the Nativity scene. Typical of those who want to please the world before focusing on the revelation of their faith. Every era and every movement has its ‘golden calf’ …,” wrote Eugenio Cecchini.

“The Vatican has become the world capital of self-parody,” wrote another Twitter user.

One user responded to Crux’s Ines San Martin, who also shared an image of the scene, commenting, “Covid idol in the Catholic Church.”

Speaking to LifeSiteNews, Fr. Ronald Vierling, director of the Pro Fratribus catechetical apostolate, suggested that the scene represented something which a “secular government” would produce, rather than the Catholic Church.

“In its December 2020 instruction, the Congregation for the Doctrine of the Faith made clear that vaccination is not, as a rule, a moral obligation and that, therefore, it must be voluntary,” he said. “The depiction represented in the Nativity, however, is more consistent with the messaging of secular governments than the Vatican’s own instruction on vaccines.”

The basilica is connected to the Sant’Egidio community — a group heavily involved in the ecumenical Assisi-style prayer gatherings — whose nativity scenes include current themes of culture and politics every year.

A description of the group’s 2019 nativity noted that the scenes were full of figures from “the peripheries of the world,” quoting from Pope Francis to say that this tradition continued his “revolution of tenderness.”

Back in October and at the order of the Pope, the Vatican began to implement a vaccine passport scheme for visitors and employees, falling in line with Italy’s Green Pass. An exemption to the passport rule for entry was made for those attending liturgical ceremonies in the Vatican, who had to remain masked and socially distanced.

The Vatican’s own nativity scene is in a more conservative style than in previous years, comprising of a rural Peruvian scene, with characters in traditional garb.

Previous versions of the Vatican’s nativity have scandalized Catholics, with the 2017 nativity notably featuring a naked man, which led to gushing praise from LGBT supporters. “The presence of the Vatican Nativity Scene for us is a reason to be even happier this year,” Antonello Sannini, president of homosexual activist group Arcigay Naples, told LifeSiteNews at the time. “For the homosexual and transsexual community in Naples, it is an important symbol of inclusion and integration.”

Social media giant Facebook even rejected pictures of the scene, due to the naked figure, saying that the images were “sexually suggestive or provocative” and thus violated the company’s policies.