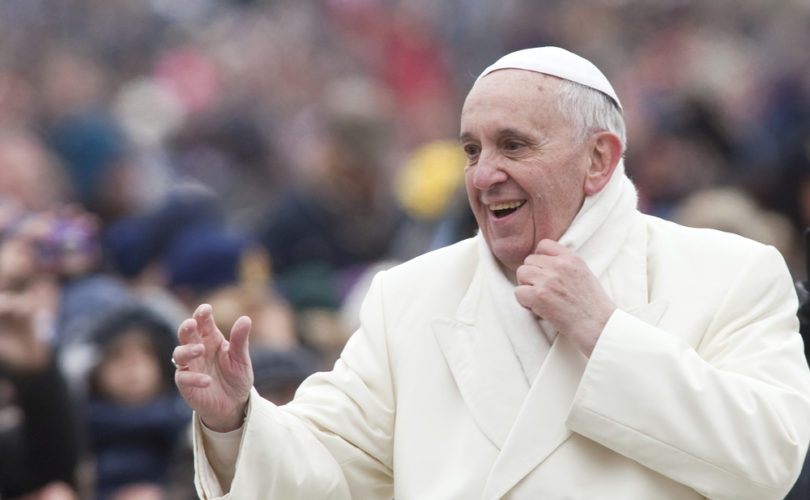 ROME, April 29, 2015 (LifeSiteNews.com) – At his weekly general audience today, Pope Francis again took up the topic of the value of natural marriage consecrated as a sacrament by God, speaking of the “maternity of women and the paternity of men for the benefit of children” as the basis of human happiness, of civilization and social stability.

Referring to the miracle of the water and wine at the wedding at Cana, the pope said, “Jesus teaches us that the masterpiece of society is the family.”

“The most persuasive testimony of the blessing of Christian marriage is the good life of Christian spouses and families. There is no better way to speak of the beauty of the sacrament!” Francis said.

“Almost all men and women would like a stable emotional security, a solid marriage and a happy family,” he said. “The family is on top of all the levels of satisfaction among young people; but, for fear of failure, many do not even want to think about it.”

But this “masterpiece” is being forgotten, even among Christians, the pope warned. They prefer, instead, to live together unmarried for limited periods, “because many – even among the baptized – have little confidence in marriage and family.”

Even committed Christians, he said, “do not think of sacramental marriage as a unique and unrepeatable sign of the covenant, which becomes a testimony of faith. Perhaps this fear of failure is the biggest obstacle to receive the word of Christ, who promises his grace to the conjugal union and the family.”

The pope again lamented the frequency and legal ease of divorce and the fall in the number of marriages overall, commenting that the reason is not necessarily to be found in the depressed economy. “In many countries,” Francis said, “the number of separations has instead increased, while the number of children is decreasing.”

“The trouble staying together – both as a couple and as a family – leads to breaking ties with increasing frequency and speed, and their children are the first to bear the consequences. But we think that the primary victims, the most important victims, the victims who suffer the most, are the children in a separation.”

Children, he said, unconsciously absorb from this experience the idea that marriage is nothing more than a “fixed-term” contract. “In fact, many young people are led to give up the project of an irrevocable bond and a lasting family.”

“Marriage consecrated by God preserves the bond between man and woman that God has blessed you since the creation of the world; and is a source of peace and good for the whole family and married life,” the pope continued.

As of 2014, the total fertility rate was officially 1.42 children born per woman. In 2012, Italy was close to the bottom of a list of nations organized according to the number of births per 1,000 population, ranking 204th out of 224 nations. This, however, is a significant increase since the country hit its all-time low of 1.18 in 1995. Demographers put the rise down to massive increases of immigration.

Pope Francis rejected the idea that the main cause was economic, answering the objection to having more than one or two children that is commonly offered in Italy. Italian news articles dealing with the issue nearly always feature interviews with women and parents saying that they cannot possibly have more than one child with the economy in a persistent slump and job security so unpredictable.

But this justification hardly holds up to an examination of the reality on the ground. The northern regions of Italy have both the highest employment and average annual salaries as well as some of the lowest birth rates. In 2014 The Local reported that the country’s highest marriage rates were in the southern regions of Calabria, Campania and Sicily, and in Emilia Romagna, a north-central region that is one of the wealthiest in Europe, marriage rates were lowest.

“The recent decline in births can mainly be attributed to the decrease in the number of children born to parents who are both Italian: almost 40,000 fewer births than in 2008. The number of babies born to at least one foreign parent continued to rise at the rate of approximately 5,000 per year until 2010,” the report adds. Italy is among the oldest nations in Europe, with about one third of the population over 55 and the median age of women at about 45.6 years.

In February this year, Francis condemned “greedy” and “selfish” people who refused to have children. “A society with a greedy generation, that doesn’t want to surround itself with children, that considers them above all worrisome, a weight, a risk, is a depressed society,” he said. “The choice to not have children is selfish. Life rejuvenates and acquires energy when it multiplies: It is enriched, not impoverished.”

Today Francis emphasized that it was Christianity that established the concept of the absolute equality of the sexes in marriage. “In the early days of Christianity,” Francis said, “this great dignity of the link between the man and the woman defeated abuse,  considered then quite normal, namely the right of husbands to divorce their wives, even with the most specious and humiliating reasons.”

“The seed of the Christian radical equality between the spouses must now bring new fruits. The testimony of the social dignity of marriage will become persuasive by this path, the path of testimony that attracts, the way of reciprocity between them, the complementarity between them,” the pope said.