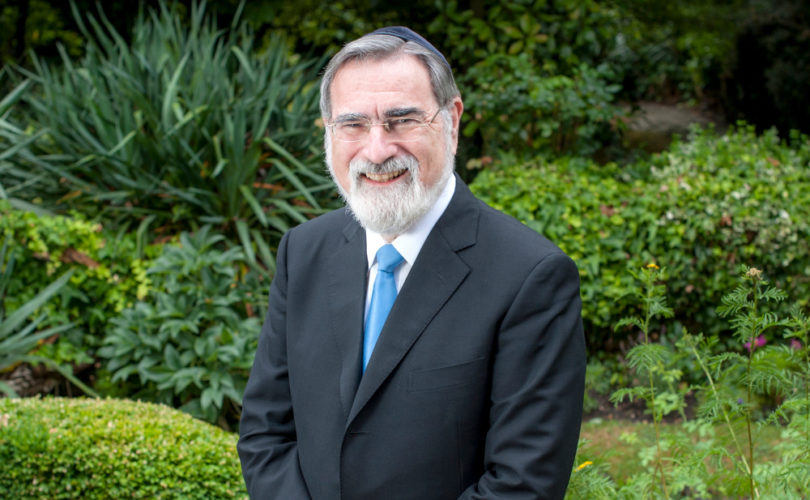 Lord Jonathan Sacks, Chief Rabbi of the United Hebrew Congregations of the Commonwealthhttp://rabbisacks.org

Correction: This article originally identified Lord Jonathan Sacks as the Chief Rabbi of the United Hebrew Congregations of the Commonwealth, however he has not held that position since September 2013. We regret the error.

The idea of the traditional family as the love that brings new life into the world, Lord Jonathan Sacks told an audience in Rome on Monday, is “the most beautiful idea in the history of civilization.”

Lord Sacks, the former Chief Rabbi of the United Hebrew Congregations of the Commonwealth, gave an address to the Vatican’s colloquium on the meaning of marriage in which he called the first chapter of Genesis “revolutionary with its statement that every human being, regardless of class, colour, culture or creed, is in the image and likeness of God himself.”

“The family, man, woman, and child, is not one lifestyle choice among many. It is the best means we have yet discovered for nurturing future generations and enabling children to grow in a matrix of stability and love,” he said.

It is in the family that human beings “learn the delicate choreography of relationship and how to handle the inevitable conflicts within any human group. It is where we first take the risk of giving and receiving love. It is where one generation passes on its values to the next, ensuring the continuity of a civilization.”

What makes the traditional family remarkable as a historical development, he said, “is what it brought together: sexual drive, physical desire, friendship, companionship, emotional kinship and love, the begetting of children and their protection and care, their early education and induction into an identity and a history.”

“Seldom has any institution woven together so many different drives and desires, roles and responsibilities. It made sense of the world and gave it a human face, the face of love.”

In his lyrical talk, Sacks took his listeners through a biblical history of marriage and the development away from polygamy in Judaism. He called the stories in the Bible of the personal “tensions” caused by polygamy, “critiques” of the practice that eventually led to the biblical injunction of marriage being between one man and one woman.

After centuries of social acceptance of polygamy, the “return of monogamy…was a real triumph for the equal dignity of all. Every bride and every groom are royalty; every home a palace when furnished with love.”

“We know that in the ancient world it was rulers, kings, emperors and pharaohs who were held to be in the image of God,” he said. “So what Genesis was saying was that we are all royalty. We each have equal dignity in the kingdom of faith under the sovereignty of God.” This imparts a kind of divine right for each person to contract a marriage and have children, he added.

Human beings, he said, “are charged with creating the social world in love and forgiveness” by God, and that love “is a flame lit in marriage and the family.”

“Morality is the love between husband and wife, parent and child, extended outward to the world,” he said.

As a member of Britain’s House of Lords, Sacks is a highly respected critic of the secularizing and anti-family social trends in that country. At the Vatican conference, he cited developments like birth control, in vitro fertilization and “other genetic interventions,” as well as a new moral idea “that we are free to do whatever we like so long as it does not harm others,” as the cause of much of the breakdown of that traditional model of family throughout the west.

This could also be attributed to “a transfer of responsibilities from the individual to the state, and other and more profound changes in the culture of the West,” that has resulted “in almost everything that marriage once brought together [being] now …split apart.”

The results are shown in the statistics in Britain, where, in 2012, 47.5 percent of children were born outside marriage, which will become a majority by 2016. “Fewer people are marrying,” Lord Sacks said, and “those who are, are marrying later, and 42 per cent of marriages end in divorce.”

“Nor is cohabitation a substitute for marriage. The average length of cohabitation in Britain and the United States is less than two years.” This global collapse of marriage as an institution has contributed significantly to increases in poverty as well as eating disorders, drug and alcohol abuse, “stress related syndromes, depression and actual attempted suicides” and huge numbers of children growing up fatherless.

“The injustice of it all cries out to heaven,” Lord Sacks said. “It will go down in history as one of the tragic instances of what Friedrich Hayek called ‘the fatal conceit’ that somehow we know better than the wisdom of the ages, and can defy the lessons of biology and history.”

In a similar vein, during a debate last week in the House of Lords on the situation in North Africa and the Middle East, Lord Sacks attributed part of the rise of militant extremist Islam to the failure of secularized governments “to deliver prosperity and national pride.”

Instead, with modern secularism in the west offering “maximum of choice and minimum of meaning,” there has been a “seismic shift” in Middle Eastern countries and elsewhere, towards “a return to the Islam that bestrode the narrow world like a colossus for the better part of a thousand years.”

Although the beliefs of such Islamist “radicals” “are hostile to modernity,” Sacks added, “they sometimes understand modernity better than its own creators in the West.

“They know that because of the internet, YouTube and the social media, communication, indeed politics has gone global. They also know that the great monotheisms are the most powerful global communities in the world, far broader and deeper in their reach than any nation state.”