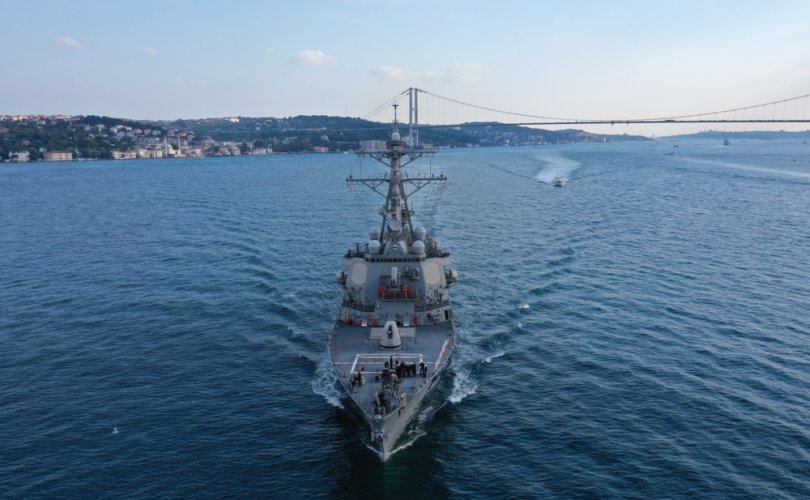 (LifeSiteNews) — The U.S. Navy claims it can’t deploy one of its warships because the vessel’s commander refuses to get the experimental COVID-19 injection for religious reasons.

On Tuesday, the Navy Times reported there’s currently a “standoff” between top military officials and the unnamed officer, who commands a guided-missile destroyer reportedly worth $2 billion.

According to the outlet, Navy officials have “lost confidence” in the officer’s “ability to lead,” and want to fire him for bucking the requirement to get the jab, as well as for allegedly exposing crew members to COVID-19 when he experienced symptoms and decided not to get tested.

“The Navy has lost confidence in his ability to lead and will not deploy the warship with him in command.”@USNavy officials said a warship can’t be deployed because its commander has refused the #Vaccine against #COVID19. https://t.co/QZG3V0Pcrq

Liberty Counsel founder and chairman Mat Staver, whose religious freedom non-profit is representing the plaintiffs in the ongoing legal battle, said the government is “putting in these histrionic kinds of statements into the record that are completely contrary to the evidence.”

“When this was filed in court saying the ship is not deployable because they lost confidence in the Commander, the Commander was on board the ship out to sea for two weeks of testing and training for military readiness,” Staver said. “He returned to port last Friday, March 4, after the drills were completed.”

In a March 1 legal filing, the Liberty Counsel asserted the Navy’s treatment of the unnamed commander “reeks of petty retaliation and contempt.”

“The Navy’s feigned ‘loss of confidence’ in the Commander is patently pretextual and has everything to do with the Commander’s lawful and orderly attempt to obtain judicial relief from an unconstitutional mandate,” the filing states.

The news comes as the Navy has refused to grant all but one of the hundreds of religious exemption requests submitted by service members.

In February, the Navy granted its first religious exemption for a sailor in the Individual Ready Reserve. However, the military branch stipulated the sailor would need to get the jab if he were to be called up for active duty or reserve status.

Some conservatives, including Republican U.S. Rep. Brian Babin of Texas, have slammed the Biden administration for pursuing jab mandates for service members, arguing that the requirements could diminish the fighting force of the U.S. military at a time of increased geopolitical threats.

To date, nearly 8,000 Navy service members are currently unvaccinated. Roughly 270 have been discharged for refusing to get the jab.