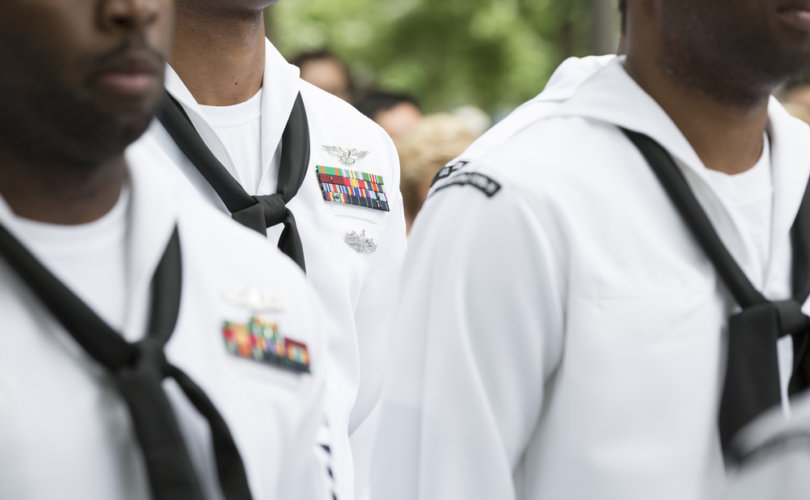 September 9, 2020 (LifeSiteNews) – After public outcry, which included a petition by LifeSiteNews signed by over 10,000 people, the Navy has reversed course and decided to renew contracts with Catholic priests to celebrate Holy Mass on military bases. The cost-cutting measure was to be enforced across the country.

Trump confirmed the news in a tweet this morning:

LifeSite stated in its petition addressed to Commander of Navy Installations, Vice Admiral Yancy Lindsey, and Commander in Chief, President Donald Trump, that it is “blatant discrimination” against Catholics to cancel Masses while still offering services to other Christian denominations.

Karen White, herself a former naval officer who retired as a lieutenant, told LifeSiteNews about the harsh “the very unique life that sailors and their families lead.”

“I won’t detail to you what my son-in-law endured on his 7 month deployment on a destroyer last year,” she said. “There were many deprivations suffered, regarding schedule, food, living conditions, etc. And he is an officer! Not to mention separation from everyone he loved and often, especially in the surface Navy, harsh superiors as well.”

White’s husband was also a long-time naval officer, retiring as a captain.

“God has mostly been eradicated from our current human culture,” White pointed out. “Suicides from the resulting emptiness are on the rise in all of society but are particularly high amongst active duty and veterans.”

“Young people who enter the service, though smart and capable, often enter with a lot of personal baggage and are extremely young. They get paid little but do benefit from the discipline, though they don’t always have good examples to follow. For the faith-filled or those faltering in their faith, the chapel and chaplain are lifelines for them. Schedules are all over the place and the ability to catch a morning or noon Mass and especially a Sunday Mass can provide the strength they need to endure the rest of their crazy life.”

She also spoke about difficulties of long deployments, often without access to Mass at all, in addition to being separated from the family back home in the United States.

With that in mind, having priests ministering “to military is unique.”

“The priests who are Navy chaplains, even the ones on contract, have an appreciation for their unique life and minister to them specifically in it,” she said. “While the option to go to a parish off base is there, it is not the same. Military chaplains are used accommodating military moves in their sacramental preps, for instance.”

“I just want you to understand the unique role and importance of having a priest on base, serving the Catholic military population there,” she emphasized.