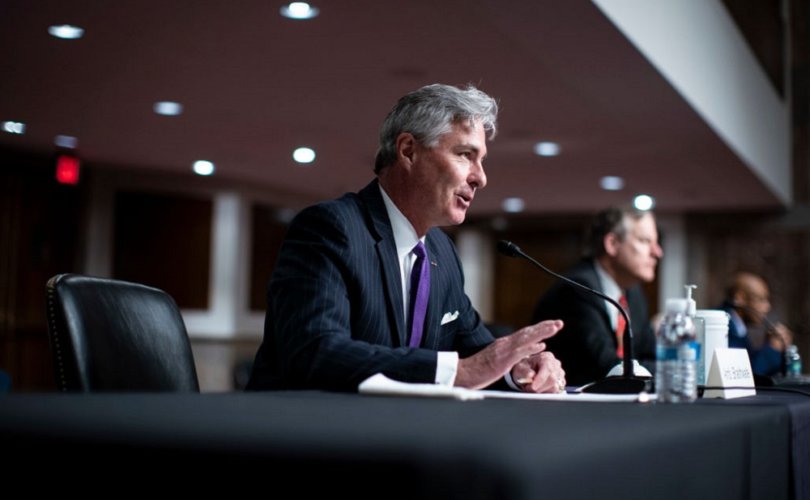 Kenneth J. Braithwaite, secretary of the U.S. Navy, at his confirmation hearings in May 2020.Al Drago-Pool / Getty Images

WASHINGTON, D.C., June 30, 2020 (LifeSiteNews) — The U.S. Navy is facing backlash after issuing a directive banning personnel from attending off-base religious services due to a recent uptick in COVID-19 cases while greenlighting participation in protests and parties.

“In open defiance of the Commander in Chief, who recently declared churches as essential to America, the U.S. Navy has threatened to court-martial service members if they go to church,” said Mike Berry, First Liberty Institute general counsel.

“It is absolutely outrageous that our troops can’t go to church, but they can attend a protest or host house parties of any size,” said Berry in a statement.

“On June 24, the Navy issued an order that banned troops from attending indoor religious services, although other activities such as using mass transit, hosting social gatherings of any size, and participation in protests are all permitted,” explains First Liberty. “But the order specifically states that “service members are prohibited from visiting, patronizing, or engaging in … indoor religious services.”

“The Navy’s orders apply to everyone assigned to Navy units and vessels including, ironically, its chaplains. Sailors returning from duty are not permitted to leave their ship until they agree to abide by official U.S. Navy orders preventing them from attending ‘indoor religious services.’ Service members who fail to abide by the Navy’s orders may be prosecuted via court-martial,” the First Liberty statement explains.

President Trump should demand the ban be immediately rescinded

“This order is unlawful and immoral, and President Trump should immediately demand its removal,” said Berry.

“The Religious Freedom Restoration Act of 1993 (‘RFRA’), prohibits the federal government from substantially burdening an individual’s sincerely held religious beliefs without a compelling interest that is furthered by the least restrictive means,” wrote Berry in a letter to the U.S. Navy.

“We are stunned that the Navy would issue this unlawful order,” said chaplain Col. Ron Crews, U.S. Army (ret.), executive director of the Chaplain Alliance for Religious Liberty, which represents 2,700 active-duty chaplains serving the Armed Forces.

“Our chaplains have fought, bled, and even died for the right of every service member to enjoy religious freedom wherever they are, at home and abroad,” Crews told Fox News. “For the Navy to strip away that freedom in this manner is unconscionable.”

“This order affects millions of service members who are willing to risk their lives for the very freedom that has been taken away from them,” he added.

A concerned member of the U.S. Navy stationed at an East Coast base, alarmed at the troubling directive, reached out to LifeSiteNews:

Our sailors … are now expected to go into harm’s way without the sacraments. (Yes this includes confession.) We are being asked to potentially die for our nation, yet our nation is withholding the graces we will need to battle. They have stranded our souls to the wolves.

This sounds like the beginning of those stories we hear of superior armies losing battles, why? Because they have abandoned God.

LifeSiteNews reached out to Archbishop Timothy Broglio, who heads the Archdiocese for the Military Services (AMS). Spokesperson Taylor Henry explained that some of the orders “have already been rescinded and the AMS is working to see all of them rescinded.”

“The AMS is following the situation closely and always advocates to protect the rights of the faithful recognized by the First Amendment that the men and women of the military swear to uphold,” said Henry.

LifeSiteNews also reached out to secretary of the Navy Kenneth Braithwaite and the Joint Chiefs of Staff for comment but received no response by press time.