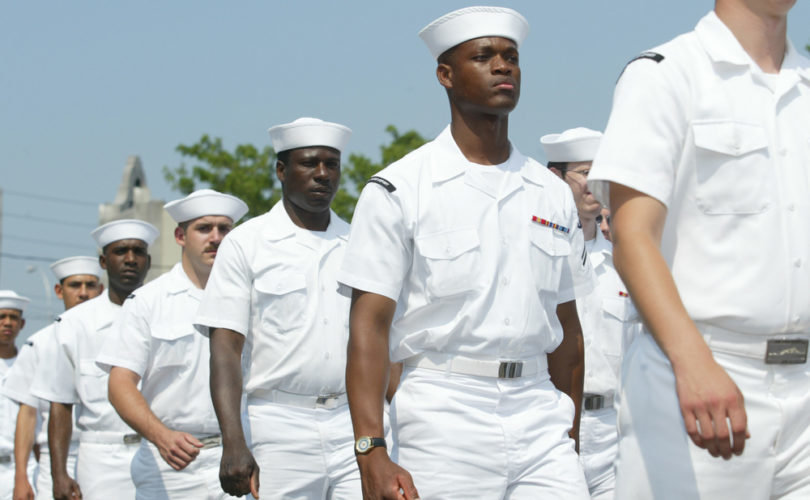 April 15, 2021 (LifeSiteNews) — A Navy lieutenant and aviator is decrying the coercive policies in the U.S. military that have already swayed many sailors who were initially opposed to taking the COVID-19 vaccine.

“There are commands that are restricting leave to those who are vaccinated,” said the lieutenant, who is known to LifeSiteNews but wants to remain anonymous. He further revealed that his captain sent an email to his command telling them that if they get vaccinated for COVID-19, they “can have 24-hour liberty.”

He explained that he had spoken to several sailors who did not want to take the vaccine, but took it anyway because it would lift severe restrictions such as mandated two-week confinement periods, travel restrictions, and the inability to get off their ship during port visits.

One sailor “outright” told the lieutenant, “If they let me take leave and loosen restrictions, hell, yeah, I’ll take it.”

“Another sailor, I told him, you don’t have to do this, this is absolutely voluntary. His words to me were, well, I don’t necessarily want it, but I want to get off the ship,” the lieutenant continued.

According to a COVID-19 operational guidance document for the Navy, “Immunized individuals on units making port calls in overseas safe haven ports” are allowed to “take advantage of base services.”

The unvaccinated are also required to undergo restriction of movement (ROM) sequester periods before and after deployment, according to the document. It states, “Interaction within ROM-Sequester location is restricted to necessities such as food delivery, health and welfare checks, etc.”

The Association for the Prevention of Torture defines solitary confinement as “the confinement of prisoners for 22 hours or more a day without meaningful human contact,” and states that “according to the literature surveyed, some of the harmful psychological effects of isolation can become irreversible” after 15 days. That is why a period of solitary confinement this long is considered by the United Nations to be torture.

Fox News host Tucker Carlson remarked on his show last month, “Apart from the death penalty, the harshest thing we do to criminals in this country includes separating them from other people. Prisoners have chosen lethal injection over solitary confinement. That’s how badly human beings need to be close to one another.”

“Crews who achieve 100% immunization may immediately take advantage of this benefit by eliminating ROM-sequester” and “relaxing health measures,” the guidance reads.

The lieutenant remarked, “So along those lines, now we’re looking at peer pressure side effects, where if one person is not vaccinated because of deeply held religious beliefs such as myself, you’re going to have all the sailors in the crew peer pressuring them to say, ‘Well, because you want to have your religious beliefs, we can’t have our lives back, so you need to do it for us.’”

He explained that he refuses to take the COVID-19 vaccine because of its “connection to abortion,” but he also believes “there’s not enough testing.”

“I believe these COVID vaccines are going to be dangerous and there will be a lot of side effects, harmful side effects later on in life. And I don’t believe it’s necessary. COVID has something like a 99.97% survival rate, it is pointless,” said the lieutenant.

Because the COVID-19 vaccines are currently still only under emergency use authorization (EUA), the vaccines cannot yet be mandated by the military. However, the military is planning to require the vaccine as soon as it officially approved by the FDA.

The lieutenant told LifeSiteNews that his captain explained this in an email in early April. “Looks like Pfizer will be fully approved for usage as early as May, then the shot will no longer be optional,” wrote the captain.

At the moment, the lieutenant explained, “My commanding officer and my executive officer, they respect my firmness on my religious convictions. But when it becomes mandatory, they will tell me to do it, or else, basically.”

Following orders is fundamental in the military, and the COVID-19 vaccine issue is no exception. “My commanding officer said his job is to enforce the policy,” said the lieutenant.

The lieutenant said he is applying for a religious exemption, which will be needed as soon as the vaccine is mandated. He expects this “before the year is over.”

“Now whether that’s approved or not, I don’t know, I’m just hopeful that they’ll play along with us, because there’s a lot of us. If it’s approved, then we’re exempt, and we move on, we keep trying to serve our country as best we can in this mess.”

“However, if it is denied — it’s an honor to serve my country in the military, but if they’re going to make me compromise my faith and my conscience, then I’m going to basically say, kick me out. And there’s a lot of us like that,” he continued. “It won’t be pleasant, but okay. We can suffer.”

“In my defense, I’ve been one of the most outspoken officers here. Because I’ve had a really consistent firm stand against it, they haven’t really messed with me too much yet. I think they see I’m willing to fight. They know I’m contacting senators, representatives, they know I’m not going to be quiet,” the lieutenant explained.

“I’m sure once it becomes mandatory, that will change, they will enforce the policy on me. They will do what they need to do to keep their jobs, to keep their careers. There’s a lot of compromise in the military right now, a lot of officers not standing up for their oath of office, not upholding the Constitution. It’s pretty blatant in many areas.”

If many aren’t willing to forgo their military careers, many also don’t want to forgo basic freedoms as they do their job. Discussing the reasons why so many sailors caved and received the COVID-19 injection, the lieutenant explained, “They want their freedom back, they want their lives back like so many people in the world do since we’ve been locked under COVID restrictions and tyranny.”