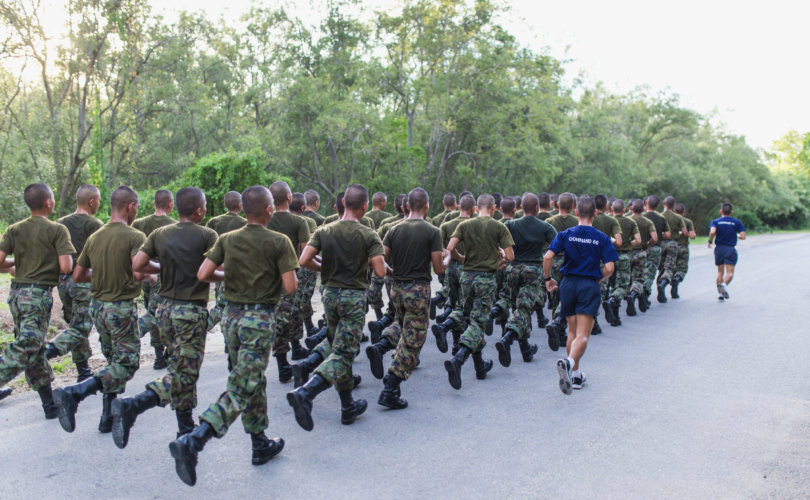 TUCSON, Arizona (LifeSiteNews) — A 22-year U.S. Navy officer told his story of fighting COVID-19 vaccine mandates and winning as part of a wide-ranging presentation Tuesday on the state of the U.S. military under President Joe Biden that was live-streamed here on LifeSiteNews.

The Flag Day press conference, hosted by the medical freedom nonprofit Truth for Health Foundation, featured remarks by Navy Lt. Billy Moseley, who objected to the mandatory COVID shots but rather than seek a religious accommodation opted to bring his objections to the administrative separation board in protest of the armed forces’ plans to implement a “blanket denial policy.”

“It was easy to see that there was a bait and switch happening,” Moseley said Tuesday. “And that’s when I started reaching out to several medical clinics, going back several times and trying to document that that approved drug was not available […]. And it didn’t matter how many senior officers, medical officers, chaplains inside the military that I would raise these concerns about, it would just fall on deaf ears and or they would say something along the lines like, we know it’s wrong. I can see that it’s illegal, but what do you want me to do? There’s nothing I can do. ”

Moseley was charged with failure to obey a direct order and threatened with discharge. He requested a court martial, and last month a three-officer Navy board determined unanimously that his refusal did not constitute misconduct and that he should be retained. Moseley’s attorney, R. Davis Younts, “successfully argued that the order for military members to receive the experimental COVID 19 injection was not a lawful order” and that “the military has not made the FDA-approved version of the vaccine available to military members,” according to a press release.

“Obviously, we did a lot of praying for that as well to get board members that would actually scrutinize this and take the time to look at the overwhelming evidence and data,” he recalls, adding that “you could see visibly on his face” the board chairman coming to the realization that he had been misled on the vaccines.

Moseley noted that his case still has not been entirely resolved; vaccine coercion is ongoing, and he still has a “flag on my record” that needs to be “adjudicated all the way up to the Secretary of the Navy,” Carlos Del Toro.

Even so, Moseley said his case demonstrated that “it’s important to stand your ground and back. You’re backed by countless federal and constitutional laws. And we’re not alone. We all know that there’s millions of Americans that will stand behind us all day, every day right now.”