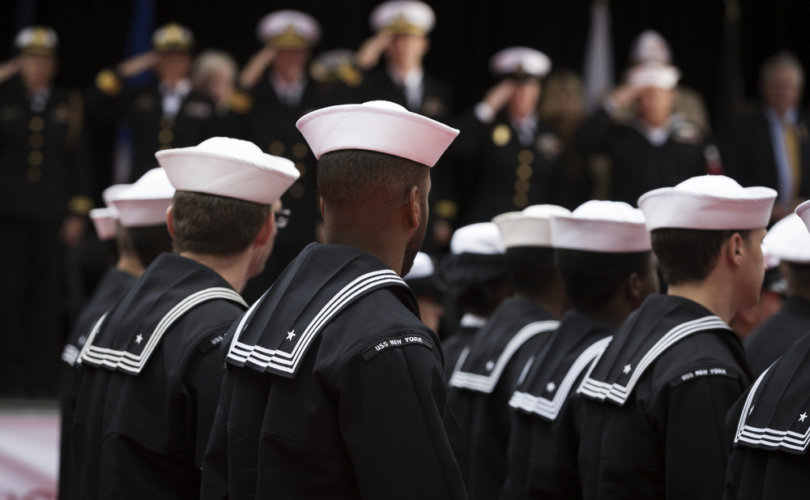 Chief of Naval Personnel Vice Adm. Robert Burke sent an all-Navy announcement on Tuesday that starting in November re-educators in “mobile training teams” will “train” and “educate” sailors about welcoming transgenders to live and serve openly on naval ships.

The campaign has a goal of re-educating all naval personnel by July 1, when the military begins accepting new transgender recruits. Secretary of Defense Ash Carter opened the military to transgenders in June.

The military is also discussing procedures to help servicemen and women change genders while serving.

“So now, thanks to Obama and the wimpy Republicans who refused to stop this insanity, our Armed Forces are going to be 'trained' — that means indoctrinated — in 'transgender' political correctness,” Peter LaBarbera, founder of Americans For Truth About Homosexuality, told LifeSiteNews. “Just decades ago, the cross-dressing Corporal Klinger was a running joke on the TV sitcom M*A*S*H. Now our leftist community organizer turned Commander-in-Chief, President Obama, has turned the noble American military into a transgender punchline.”

LaBarbera asked, “Will the Navy now become the transgender 'Pronoun Police' and discipline sailors who refer to a biological man wearing a female uniform as a 'he'? Will Naval authorities be publishing a new list of preferred, newfangled 'transgender' pronouns for enlisted gender rebels: 'ze, zir,' etc.?  Will U.S. citizens end up paying for hundreds and then thousands of awful, body-disfiguring 'sex reassignment surgeries' performed by military doctors?”

“But I blame the Republicans for barely putting up a fight after they lost on 'Don't Ask, Don't Tell,' allowing open homosexuality in the military,” LaBarbera said. “Why aren't we talking about this PC military in this election cycle? Why aren't the Republicans saying, 'Enough is enough' and laying out detailed plans about congressional hearings and how they plan to turn this transgender nonsense around?”

“We can only hope that a saner administration will take over, and a new commander-in-chief will again focus only on what makes our national defense stronger, rather than turning our men and women in uniform into guinea pigs for the hard Left's radical, egalitarian social agenda.”

Additionally under the Obama administration, servicemen and women were commanded in mandatory re-education sessions to view homosexual behavior no differently than heterosexual activity. Soldiers were told that if they see two men kissing each other they “should react as if he were seeing a man and a woman.”

Anyone with a moral or religious objection was told to either accept it or leave military service. When then-Defense Secretary Robert Gates was asked by a Marine critical of repealing DADT, “Is there going to be an option for those Marines that no longer wish to serve due to the fact their moral values have not changed?” Gates answered, “No. You’ll have to complete your … enlistment just like everybody else.”

In other words, the Obama administration makes clear any resistance will result in a dishonorable discharge. The mainstream media cite the fact that no one has left yet as proof that Obama's repeal of DADT is going smoothly.

A 2008 Military Times poll found that 24 percent of enlisted servicemen said they would leave the military or consider leaving upon repeal of DADT. In 2010, the Pentagon acknowledged that 60 percent of those in the Marine Corps and in Army combat units said they thought repealing the law would hurt their units’ ability to fight on the battlefield.