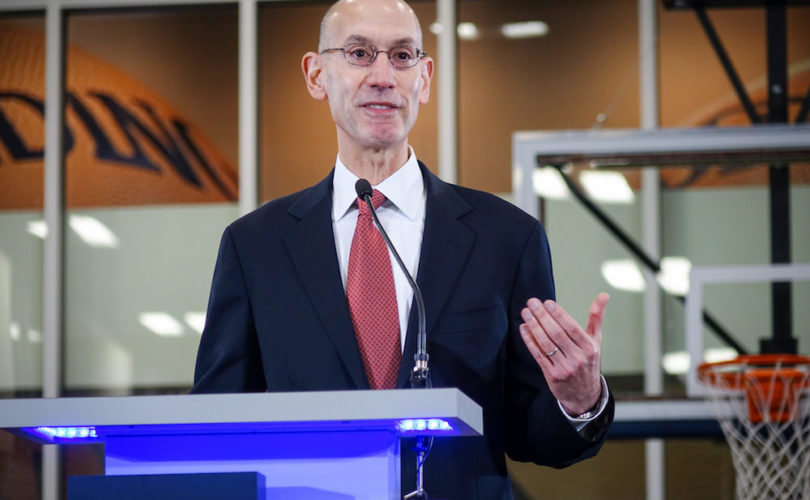 OAKLAND, California, June 6, 2016 (LifeSiteNews) — The National Basketball Association has given the state of North Carolina until the end of the summer to change the state’s bathroom privacy protections, or potentially lose the 2017 All-Star Game.

At Game 1 of the NBA finals on Thursday night, NBA Commissioner Adam Silver said he would need to see legislators take steps toward changing the law, for Charlotte to host the All-Star Game.

“I don't see how we would get past this summer without knowing definitively where we stand,” Silver said.

Silver, while denying he is issuing an ultimatum, admitted his threat of moving the All-Star Game out of Charlotte and the actions of other businesses are pressuring North Carolina.  “However heartfelt their views are…the current state of being is causing enormous economic damage to the state,” he said.

Silver added he was “pleased” with the growth of dialogue between the NBA and the state, and he expects a satisfactory resolution to the impasse.

Meanwhile, the National Football League (NFL) is also applying economic and social pressure to try to force North Carolina to repeal the law.

“Anything that discriminates, we oppose,” Goodell said.  “We’re going to work with the community to make the effective changes necessary long term.”

In a related move, San Francisco 49ers owner Jed York demanded North Carolina repeal its bathroom privacy law, and gave — in the name of the sports team — $75,000 to a gay and transgender activist group which is fighting the North Carolina law.

Silver has repeatedly denied that he is trying to force North Carolina to change its policy, but critics say that's exactly what Silver is doing.

“Liberals have decided they want to bully Americans in every aspect of our lives: music, TV, movies, and now sports,” Media Research Center Vice President Dan Gainor told LifeSiteNews.  “The major sports leagues, heavily influenced by left-wing, social justice journalists, are intent on turning the NBA, NFL, NCAA and more into weapons to blackmail states into accepting the unacceptable.”

“It's time for states and fans to tell the leagues and the journalists who play puppet master that our families are more important,” he told LifeSiteNews.