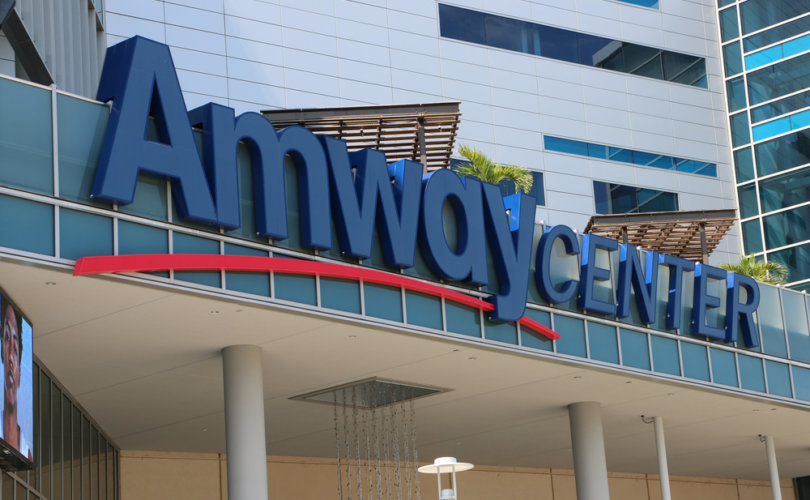 ORLANDO, Florida, February 24, 2021 (LifeSiteNews) — As spectators flocked to Orlando’s Amway Center last Wednesday evening for the NBA game, they were required to download a “Health Pass” app upon arriving at the doors. The app tracks information about the user’s test history for COVID-19, as well as their vaccination status, to prove a clean bill of health before being allowed to take their seats.

Florida is currently one of the least restricted states amid ongoing COVID-related government lockdowns. There are no state-wide travel restrictions in place in Florida and no imposition on businesses to close, or individual Floridians to stop working, following a September 25 executive order from the state’s Republican Governor, Ron DeSantis. The order also revoked provisions that allowed fines or any other penalties to be levied for violations of local face mask orders.

Currently, Florida Health, the state’s health department, is only recommending face masks be worn in public, without making it a mandate.

Despite no government regulation of face masks or requirements for COVID tests to enter buildings and stores, individual businesses seem to have taken it upon themselves to mandate a health screening before granting paying customers access to their buildings, using one of the newly available COVID-19 “passport” style smartphone apps.

The Amway Center in Orlando is one such business.

LifeSiteNews spoke to a family that had turned up for the game. They said being asked to prove they were healthy, even without having had COVID symptoms within the last two weeks, came as a shock. “[I]t all happened so quickly,” they said. “[A staff member] was instructing everyone to take out their phones, download the app, and enter their information.”

Spectators at Wednesday night’s New York Knicks v. Orlando Magic basketball game were required to download the CLEAR Health Pass app onto their devices, upload a government-issued I.D. to the app to “verify” their identity, and then take a health screening survey before being granted access to the stadium. The father and his three boys in question had already paid for their tickets in advance, but would still have been denied entry if they did not comply with the arena’s strict rules or, indeed, if the CLEAR app returned a “red” result, an Amway representative confirmed.

The family said that after they had complied with the mandatory health screening and proceeded to their seats for which they had paid hundreds of dollars, they were still barraged with “non-stop reminders, workers with signs, to keep masks up while in the arena, even in between sips of a beverage.”

According to their website, “The Orlando Magic are partnering with Health Pass by CLEAR to help you enter Amway Center. Health Pass is a free mobile solution that allows you to complete a COVID symptom and exposure survey before arriving at the game. The survey must be taken no more than 12 hours prior to game time.”

“All fans will need to complete a symptom and exposure survey before or upon arrival using the CLEAR app.”

Even stricter rules are in place for those who have purchased courtside tickets or “ultimate seats,” that is, seating in the first seven rows. Such ticketholders “will also need your lab provider login,” to “prove” oneself to be virus-free after having taken a COVID test: “Remember to complete the in-app checklist before the game as a COVID-19 test is also required to enter if you’re in Courtside or Ultimate seats.”

Even with the pre-screening measures in place as people enter the arena, spectators are still required by Amway management to wear face masks of at least two layers: “Bandanas, gaiters, face coverings with vents and face coverings with only a single layer of fabric are not acceptable.”

Additionally, tickets are to be booked “in groupings of 2-6 seats called pods. All seats must be purchased within a designated pod.”

Any customers who have health conditions or impairments that normally satisfy face mask exemptions are asked to contact the arena at least 72 hours in advance of the event, or else entry will be denied. Those who do make prior notice of their exemption “will be required to wear a face shield and will be relocated to seats to accommodate the wearing of a face shield.”

Other measures introduced by stadium management include a no-bag policy “to reduce contamination,” and making all transactions necessarily cashless.

While the NBA is relying on negative RT-PCR tests to “verify” guests as being COVID-free before granting entry to paying customers, a group of 22 independent research scientists have thoroughly criticized and debunked the Corman-Drosten paper (CD), a study which gave rise to the widespread use of PCR testing for COVID-19.

The consortium identified “numerous technical and scientific errors,” noting that neither the “test nor the manuscript itself fulfils the requirements for an acceptable scientific publication.” They dubbed the CD paper as “flawed science” and called its authors “intellectually dishonest.”

The scientists drew attention to the fact that the team which initially developed PCR testing had no access to COVID-19, and thus were unable to verify its application. On account of this, the group called the tests “useless” and “completely unsuitable” to sufficiently detect cases of COVID.

In New York, meanwhile, games in gigantic arenas are limited to a few hundred spectators. The NBA’s Brooklyn Nets provide “a free COVID test when you buy a ticket.”

“As soon as you enter, you’ll provide your name where they’ll check for the … required negative PCR test result you received before the game and the health questionnaire you’ve filled out,” reported the local ABC station. “Then you sign a waiver, get your free mask, get your temperature checked, and receive an antigen test. Then it's off to an outdoor heated tent space to wait for your results, which is supposed to take about six minutes.”

Only then will paying customers be allowed to enter the facility.