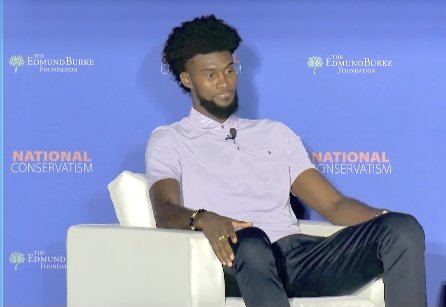 (LifeSiteNews) NBA player Jonathan Isaac has stood up at times when many of his teammates have not – literally for the national anthem and figuratively against coerced COVID vaccination.

His Christian faith, he said November 2 at the National Conservatism Conference, is what guides his decision-making.

“Christ is the answer for the problems that we see in the world and until we can humble ourselves and reckon with that, we won’t see real change,” Isaac said, first explaining why he did not join his teammates last year in supporting Black Lives Matter and kneeling during the national anthem.

The conversation with podcaster Dave Rubin, an open homosexual, then turned to Isaac’s past statements on why he chose not to get the COVID shots.

The media misrepresented his decisions, Isaac said, including falsely claiming that he chose not to get jabbed because he listened to President Donald Trump.

He said that some players, even some who have gotten jabbed, supported his personal decision, privately or publicly.

Isaac then talked about how his fellow NBA player Kyrie Irving of the Brooklyn Nets cannot play any home games because of New York City’s vaccine passport system. Rubin mentioned that Isaac is fortunate to play for a Florida team – the state does not have any vaccine passports.

going on and yeah it’s unfortunate for the Kyrie situation,” Isaac said. “You know I just feel like he … gets a great deal of respect for me for the courage that it takes to not only say ‘no’ but to forgo money and everything that he’s doing.”

they don’t have a place to turn in this whole matter,” the Magic player said.

Isaac said he grew up in a Christian household and is thankful for Christ’s “unconditional love.”

Rubin asked Isaac about his philosophical views, noting that the NBA player had first asked him about psychologist and gender theory critic Jordan Peterson.

“He doesn’t strike me as a white supremacist,” Isaac said to laughs from the crowd. He said he “dove” into Peterson’s lectures and listened to Rubin and other speakers at the event’s views.

Isaac reiterated his support for natural immunity and “common sense” when it comes to vaccine. He said conservatives should focus their messaging on families and everyday people.

He concluded by saying he wants to be able to use his platform as an NBA player to help others use their faith to stand up for their beliefs.

“How can I provide the tools that have been afforded to me through Christ,” Isaac said he asked him, “and through just how I’ve thought and packaged it in a way and so this is not to just the plug but I am working on a book right now and it’s called it’s called ‘Why Stand.’”

“It takes the journey of my life and you know being a young kid and experiencing racism at a young age and being somebody that at a time would not be on this stage or stand up for what he believed in but finding my courage finding my strength and confidence in Christ to then step out and be the only one to do something and so kind of packaging that in a way to give people the tools and the confidence and the courage to step out and stand for what they believe in,” he concluded.