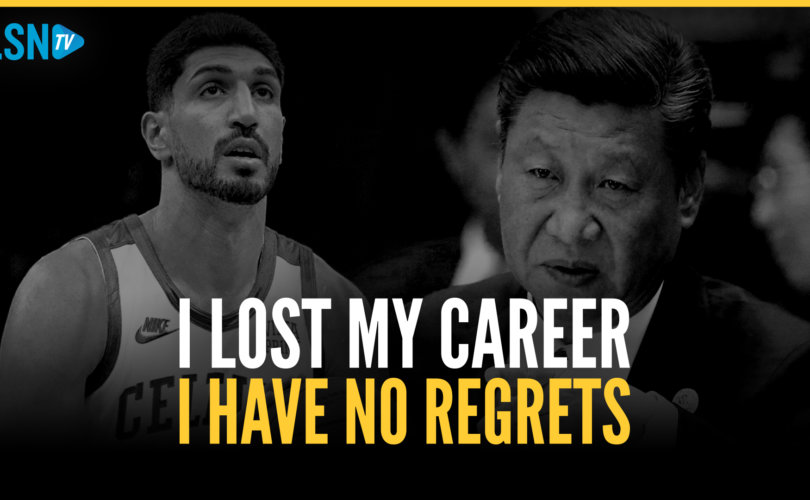 Before an international crowd of freedom fighters against the Communist Chinese Party (CCP) as well as survivors of those brutally victimized by the regime, NBA player Enes Kanter Freedom received the 2022 Freedom Award from the Captives Nation Coalition of the Committee on the Present Danger: China (CPDC).

“I cannot call myself a hero, when we have these heroes [in] front of me,” began Freedom at the Feb. 17 ceremony. “You can talk about all the social justice, all the injustices that are happening around the world, but when it comes to China, you cannot speak up, because if you do, then you have to face the consequences.”

The athlete, a Turkish Muslim, garnered international attention by repeatedly using his Twitter account to demand Xi Jinping and the CCP cease their relentless and bloody oppression of China’s ethnic minorities. Chinese TV stations responded by refusing to air games in which Freedom participated, costing the NBA untold millions of dollars in lost revenues. The estimated number of Chinese viewers of American basketball is 400 million — a count that exceeds the entire population of the United States — and the NBA profits an estimated $5 billion annually from its Chinese fan base.

Freedom’s criticisms of the CCP regime have likely cost him his career, with him being rejected and suddenly left without a team in the midst of an NBA trade deadline last week. “Once you speak out about the issues that affect people’s money and business, people [are] going to get very uncomfortable,” Freedom explained. “But there are some [more] important things than money and business, like morals, like principles, like values, you know?”

Freedom believes that companies indiscriminately conducting business with China enable the CCP to continue its widespread terror campaign on the Chinese people and nation’s ethnic minorities.

“U.S. corporations, organizations and influencers who are not defending the families and communities being methodically exterminated by Communist China are complicit in their crimes,” commented Dede Laugesen, executive secretary for the CPDC, in a press release before the awards event.

“They have sold themselves to the Chinese Communist Party and abandoned all moral principles for profit,” she continued. “They defend the CCP — and effectively are enabling its malevolent intent to destroy America — without concern for the people being harmed to date and those in the Chinese Communists’ cross-hairs. Our Captive Nations Coalition is standing with Enes Kanter Freedom against these traitors to America and the free world.”

Despite traveling down what he called “a lonely road” in the sports world, Freedom said that he will continue to stand with all of those suffering in China and never back down. “If I didn’t speak up about all the issues that are happening, I wouldn’t be able to go to sleep. I have no regrets. I want to tell you guys that I have no regrets.”

In addition to Freedom, two Chinese women were also honored at the event for their heroism in speaking out publicly against the CCP: Zhang Zhan and Peng Shuai.

“We are pleased to present our first ‘Speak Truth to Power’ award to two valiant Chinese women:  Zhang Zhan and Peng Shuai,” said Reggie Littlejohn, founder and president of Women’s Rights Without Frontiers, in a press release. “This award is designed to honor heroes who have stood up and told the truth about a powerful enemy — in this case, the Chinese Communist Party — at great cost to themselves.”

Zhang Zhan was recently sentenced to four years in prison by the CCP for posting unfiltered videos of scenes in Wuhan Province at the beginning of the COVID-19 pandemic. Zhan, a Christian currently believed to be on the brink of death, has undertaken a hunger strike in protest against the injustice.

Peng Shuai, a tennis star, posted in a public internet forum that she was sexually assaulted by a CCP operative and then disappeared. After three weeks, she re-emerged and recanted her statement in carefully scripted appearances. She has had her passport revoked and has been forced to retire from professional tennis.

“Zhang Zhan and Peng Shuai have paid the price of speaking truth to power, and both are worthy recipients of this award,” Littlejohn said. “They are not here to receive their awards because they cannot leave China. They have lost their freedom. I hope one day to be able to present these awards to them in person.”

The deep level of personal sacrifice required to advance the cause of freedom was a theme that continuously emerged at the event.

“We had a whole generation [that] fought an entire war in both Asia and Europe, just to make sure that the next generation did not have to suffer something that the other people in that generation did,” Se Hoon Kim, director of the Captive Nations Coalition, told LifeSiteNews.

“If anything, even if the media may be silent, even if governments may be silent, it’s regular folks like ourselves who will make the biggest difference. And that is why, not just through this award [to Freedom], but by constantly speaking out, constantly making it into a conversation — even at home — about what is happening to the Uighurs, that is how we will make the changes.”