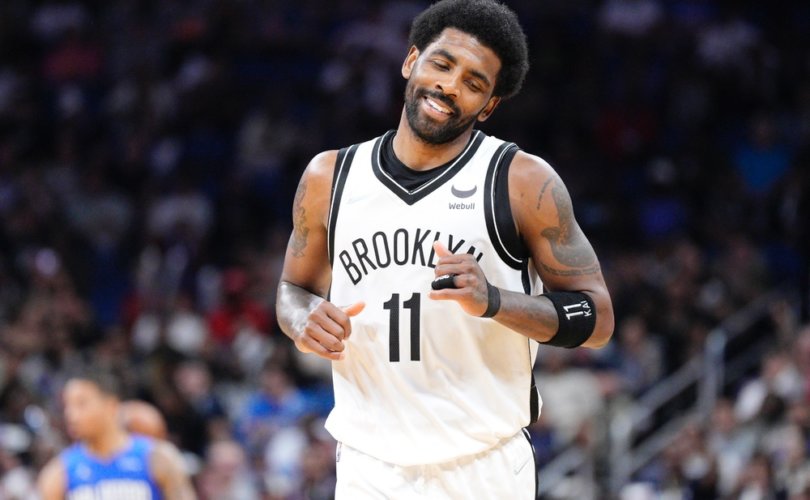 Kyrie Irving #11 of the Brooklyn Nets reacts after scoring against the Orlando Magic in the second half at Amway Center on March 15, 2022 in Orlando, Florida. Mark Brown / Getty Images

(LifeSiteNews) — NBA star Kyrie Irving revealed just how much he had to give up for refusing to get vaccinated against COVID-19.

On Monday, in an interview with TJ Sports USA, the Brooklyn Nets guard, whose unvaccinated status limited him to 29 games last season, said he lost millions of dollars in a potential contract extension.

“I gave up four years, $100-something million deciding to be unvaccinated,” Irving tweeted, quoting from his interview. “I had to deal with that real life circumstance of losing my job.”

“I gave up 4 years, $100-something million deciding to be unvaccinated. I had to deal with that real life circumstance of losing my job.”

In the interview, Irving said that the decision to remain unvaccinated left him without the stability of knowing what the future would hold, and that it was an emotional time for him as he tried to care for his family amid that uncertainty.

He also said that he did not appreciate how his choice to remain unvaccinated led to “a stigma” surrounding him where people believed he did not want to play or that he was willing to give up anything to be “a voice for the voiceless.” He said that standing up for the voiceless was not his only intention in remaining unvaccinated, but that his decision was to “stand on something that was bigger than myself.”

“I didn’t appreciate how me being unvaccinated came to be a stigma within my career that I don’t want to play, or that I’m willing to give up everything to be a voice for the voiceless.”

Irving, who decided in 2021 to remain unvaccinated despite being barred from playing for most of the season due to New York’s strict vaccination requirements, has been vocal in his defense of people’s choice to not be vaccinated and maintains that the decision to be vaccinated should be up to the individual.

“I’m staying grounded in what I believe in,” he said in a live Instagram video earlier in September. “It’s not about being anti-vax or about being on one side or the other, it’s really just about being true to what feels good for me.”

Irving has also previously called out COVID-19 for the discrimination it has inflicted on humanity, calling it one of the largest instances of human rights violations in history.

“If I can work and be unvaccinated, then all of my brothers and sisters who are also unvaccinated should be able to do the same, without being discriminated against, vilified, or fired,” Irving tweeted on September 20. “This enforced Vaccine/Pandemic is one the biggest violations of HUMAN RIGHTS in history.”

If I can work and be unvaccinated, then all of my brothers and sisters who are also unvaccinated should be able to do the same, without being discriminated against, vilified, or fired. ♾🤞🏾

This enforced Vaccine/Pandemic is one the biggest violations of HUMAN RIGHTS in history.