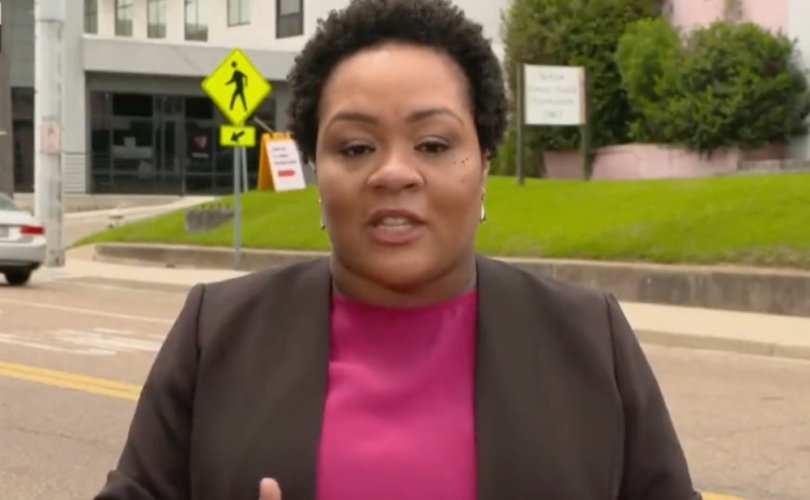 JACKSON, Mississippi (LifeSiteNews) – In a recent interview responding to the Supreme Court draft opinion leak, an NBC report slated the potential overturning of Roe v. Wade saying it would “force” women “to have pregnancies that will then turn into children.”

On May 3, NBC News aired a report featuring their TV reporter, Yamiche Alcindor, who recounted the events at Mississippi’s last abortion center.

Anti-abortion activists are not only celebrating, they “are turning their gaze to same-sex marriage.” pic.twitter.com/9DcyGcClrJ

“While conservatives are celebrating the possible end of Roe v. Wade, some women here tell me they feel ‘gutted,’ ‘devastated,’ and ‘like someone has died’,” she tweeted.

While Mississippi is predominantly pro-life, this abortion center, which allows late-term abortions, is at the heart of the SCOTUS case that could overturn Roe v. Wade after the facility challenged Mississippi’s 15-week abortion ban, claiming it contradicted Roe v. Wade.

NBC’s Alcindor lamented the potential loss of abortion access that could occur if Roe is overturned, after the world was shocked by a U.S. Supreme Court draft majority opinion was leaked, which if left unaltered, would overturn the nearly 50-year-old abortion law.

“While women are getting the service that they need today, and they’re getting abortion today, their question is (for) how long?” Alcindor asked.

Pro-abortion NBC News has produced many similar reports lamenting the potential loss of “abortion care” for impoverished and black communities.

Furthermore, Planned Parenthood, the main abortion provider in the United States, places 86% of its clinics in minority neighborhoods. Founder of Planned Parenthood, Margaret Sanger, has openly admitted that her aim was to “exterminate the negro population.”

Alcindor also reported that she met with a pro-life advocate who had been defending the unborn at that abortion clinic for decades. Upon asking him what he would do if abortions were banned, the pro-lifer allegedly said he would turn his attention to ending gay marriage.

“And one other thing, someone told me here, that Mississippi as a state doesn’t have a lot of safety nets, that the women are going to be forced to have these children,” Alcindor said.

“They’re going to have a really hard time trying to support those children with a state that has not done a lot of the things to extend the sort of benefits that women need in order to get more help and more care to be able to really support their families,” she claimed.

However, the pro-life organization Choose Life Mississippi provides access to pregnancy care centers in need across the state. These centers offer physical, medical, and emotional to pregnant women and mothers.