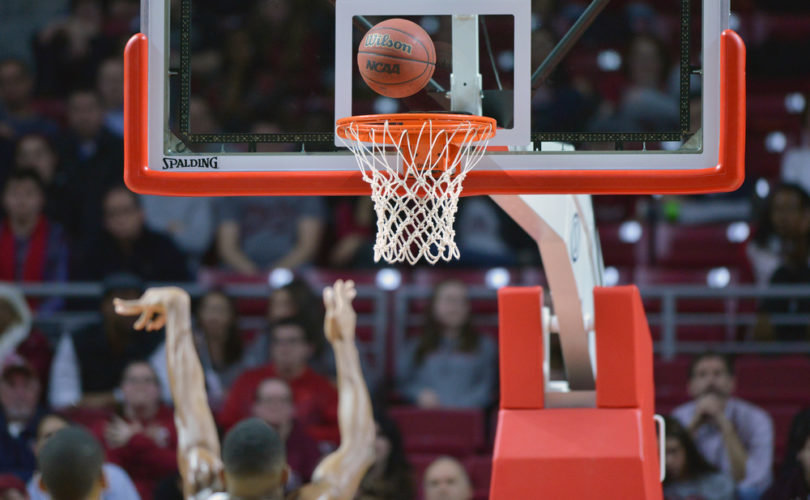 March 23, 2016 (CardinalNewmanSociety) — Catholic colleges and universities that requested exemptions from the new gender identity provisions of Title IX in order to protect their religious missions will not receive any backlash from the National Collegiate Athletic Association (NCAA) — at least for now.

A group of over 80 “lesbian, gay, bisexual, and transgender (LGBTQ), sports, religious and youth advocacy groups” signed a letter to the NCAA on March 9 petitioning the athletic association to “take action to divest from all religious based campuses who have requested discriminatory Title IX waivers toward LGBTQ youth.”

“These requests are directly in conflict with the NCAA’s longstanding commitment to diversity and inclusion of all people regardless of sexual orientation and gender identity,” according to the letter. “The Title IX waiver allows campus administrators to deny transgender students admission, usage of public accommodations, and protections against anti-LGBTQ actions from students and faculty — all based on a student’s gender identity. The Title IX waivers requesting to discriminate against transgender students create an unsafe environment for all LGBTQ students, both in academics and athletics.”

The letter was organized by the groups Soulforce and Campus Pride, which maintains a so-called “Shame List” of colleges that supposedly engage in “religion-based bigotry” by legally requesting Title IX exemptions from the U.S. Department of Education’s Office of Civil Rights (OCR).

Campus Pride identified 37 religious colleges that have received the Title IX waiver, including the Catholic institutions Belmont Abbey College in Belmont, N.C., Franciscan University of Steubenville in Ohio and St. Gregory’s University in Shawnee, Okla. The LGBTQ activist group also lists 22 religious colleges with pending Title IX waivers, including John Paul the Great Catholic University in Escondido, Calif., and University of Dallas in Irving, Texas. All of the Catholic colleges identified are recommended in The Newman Guide to Choosing a Catholic College.

Belmont Abbey is an NCAA Division II college, and Franciscan University and University of Dallas compete in NCAA Division III sports. St. Gregory’s is a member of the National Association of Intercollegiate Athletics (NAIA), and John Paul the Great is not affiliated with an athletic association.

Title IX of the Education Amendments was signed into law in 1972, and was designed “to avoid the use of federal money to support sex discrimination in education programs and to provide individual citizens effective protection against those practices.” The Department of Education broadened Title IX in April 2014 to prohibit discrimination on the basis of gender identity, supposedly in an effort to protect transgender students. The OCR invites colleges to apply for exemptions from Title IX “to the extent that the law’s requirements conflict with the organization’s religious tenets.”

“[T]he Association values diversity and inclusion and its importance in higher education through sports. Our diverse membership comprising over 1,100 schools all serve to educate students while also preserving individual institutional values,” the NCAA stated in a March 15 letter responding to the LGBTQ groups. “In doing so, the landscape of higher education offers students the opportunity to select from schools that value various attributes.

“While it is not our role to tell schools whom they should  admit, the goal of higher education is to promote students making a decision based on their decision to evaluate multiple schools to find one that best meets their needs to be successful,” the NCAA continued.

The Association declined to involve itself in the protest over Title IX exemptions, pointing out that the Association does not “play any role in making waiver decisions,” which are overseen and enforced by the OCR. The statement asserted that the organization “is committed to supporting a student-athlete experience that prioritizes student health, safety and well-being,” and listed several NCAA initiatives created to support LGBTQ students. The NCAA also stated in the letter that a new version of its transgender student-athlete guide is scheduled to be released in April 2016.

The LGBTQ groups that petitioned the Association were “deeply disappointed” with the NCAA’s response.

Campus Pride targeted Belmont Abbey College back in December for requesting a Title IX waiver. The College argued that the federal government’s new interpretation of Title IX would endanger its religious mission, and could also bring harm to students by legitimizing “spiritually harmful” practices.

At the time, Abbot Placid Solari, O.S.B., chancellor of the College, told the Newman Society: “A policy which would legitimize gender identity issues, particularly according to the interpretation put forward by employees of the Department of Education, would … abdicate the responsibility of the college community as a whole to act in accord with its fundamental identity as a community which publicly identifies itself as in communion with the Catholic Church.”

He added that, based upon the “essential characteristics” of a Catholic college outlined in Ex corde Ecclesiae, the apostolic constitution on Catholic universities, such a policy “would abdicate the college’s responsibility as an educational and intellectual community to contribute the insights of Catholic faith and reflection to the public discussion on the issues of gender identity … would contradict fidelity to the Christian message as it comes through the Church” and “would abdicate responsibility to serve the transcendent goal of life by advocating practices which, according to the Church’s teaching, are spiritually harmful.”

The Newman Society has encouraged all Catholic colleges to claim the Title IX exemption to protect the religious mission of their institutions.

“Of course these colleges have no interest in sex discrimination. They have had no problems complying with Title IX,” Newman Society President Patrick Reilly said back in January. “But now things are changing, and the Obama administration is pushing the extreme gender ideology that Pope Francis has strongly warned against. The law could be used to force practices that violate our beliefs and even natural law, unless religious educators claim the exemption that Congress gave them to uphold the First Amendment.”

“The big question is why some Catholic colleges are voluntarily declining to claim the exemption, when discrimination against our beliefs is a very serious prospect,” he added.