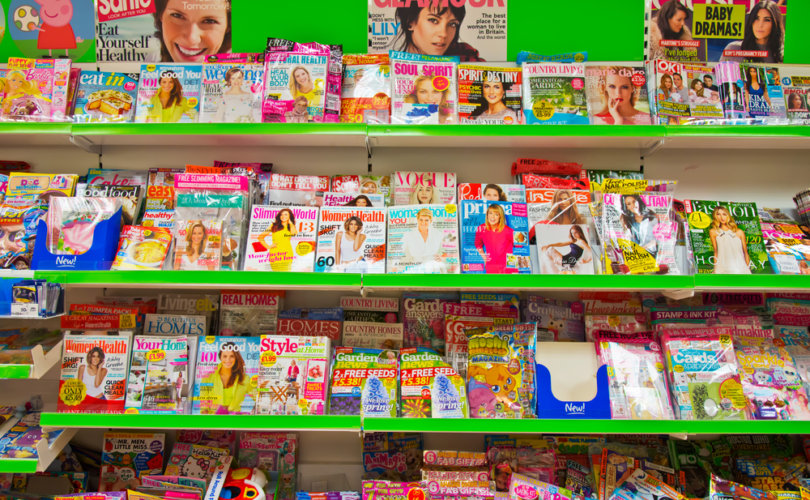 December 16, 2016 (LifeSiteNews) — Cosmopolitan has lashed out after a human rights group revealed that a supermarket chain chose to hide the raunchy sex magazine from customers in its checkout lanes.

On Wednesday, the National Center in Sexual Exploitation (NCOSE) issued a public statement applauding the decision by Marsh Supermarkets—a chain of produce markets and convenience stores with 72 locations in Indiana and Ohio—to remove Cosmopolitan magazine from its checkout lanes, and to keep Cosmo out of the direct sight of its customers. But now Cosmopolitan has replied with a public statement defending its sexually toxic magazine.

A Cosmo spokesperson told Yahoo that the Hearst Corporation made the decision to remove their magazines from customers’ view, not Marsh Supermarkets. They also stated that this is “yet another example of a fake news story perpetuated by a fringe special interest group, in this instance NCOSE. This decision was made by us — not the retailer — in August. It is not unusual for us to strategically shift where and how we display our product.”

But according to the NCOSE, the magazine's statement is false.

“Cosmopolitan is nervous because consumers are tired of its blatant sexual objectification and sexually explicit articles,” replied Dawn Hawkins, Executive Director of the National Center on Sexual Exploitation. “A nation-wide survey found that 67% of Americans think Cosmo’s covers are not appropriate for all ages, and 65% of Cosmo’s own target audience (women, ages 18-30) agree that the magazine is inappropriate for all ages. Clearly, if anyone is on the fringe of public opinion it is Cosmopolitan.”

“A few months ago a concerned Marsh customer contacted NCOSE about the display of Cosmopolitan in their supermarkets. So NCOSE reached out to Marsh executives in August requesting that they remove Cosmo from their store,” Hawkins continued. “Marsh executives responded to NCOSE in October informing us that they would pull Cosmo from checkout lanes and, elsewhere in the store, place it behind other magazines so as to create a blinder. In December, Marsh informed us that this new policy had been implemented.”

“Why would any magazine company claim that it decided to remove its publication from checkout aisles? Is Cosmo’s new business strategy to lose money by asking for less prominent product placement? Cosmopolitan’s latest statement is an embarrassing attempt to save face amidst a rising generation that no longer tolerates sexually exploitive products. Socially conscious consumers and retailers are rejecting Cosmo, and taking a stand for a world free from sexual exploitation.”

Due to its glamorization of pornography and explicit sexual content Cosmopolitan is a member of NCOSE's 2016 Dirty Dozen List.

NCOSE has published the following e-mail as proof that they initiated the dialogue in August over Cosmopolitan's placement in Marsh Supermarkets (click to enlarge):