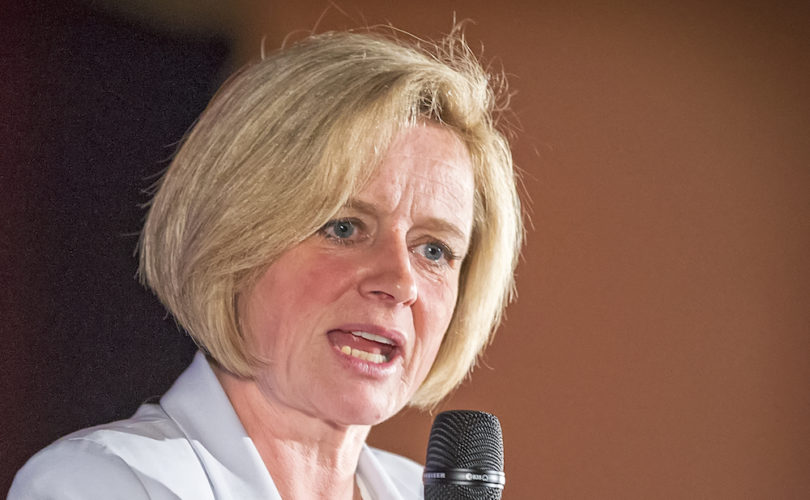 EDMONTON, Alberta, November 1, 2016 (LifeSiteNews) — In light of NDP Premier Rachel Notley’s declaration while an opposition MLA in 2013 that the NDP caucus was “steadfastly opposed to private schooling,” it’s little wonder many parents — and at least one pundit — are wondering if this ideology is partly behind the NDP’s drastic shutdown of the province’s largest Christian homeschooling operation last week.

In 2013, Notley told the legislature:

NDP Education Minister Dave Eggen announced October 25 he was permanently shutting down Trinity Christian School and WISDOM Homeschooling Society, which administered Trinity’s homeschooling of 3,500 children, citing a provincial audit that claimed to have found evidence of financial misconduct and contravention of provincial laws.

Eggen, too, as an opposition MLA rebuked parents in 2012 for choosing alternative education for their kids: “Why spend $10,000, $20,000, $30,000 on a private school when you probably get a better education in the public school down the street?” he said at that time.

“The agenda of the NDP, their mandate, their platform, is that they believe in public schools,” noted Paul van den Bosch, president of the Alberta Home Educators Association (AHEA).

The NDP shutdown “seems like a very callous and cavalier decision,” says Van den Bosch, and the “hundreds” of parents he’s heard from are angry, and asking, “Is the goal here for the minister to put an end to homeschooling here in Alberta?”

Van den Bosch, who is a full-time facilitator for WISDOM and father of seven homeschooled children, told LifeSiteNews there’s a number of questions homeschooling parents have for Eggen.

“A, do you want all of our children to attend public schools, and that’s it, that’s the only choice we will have? And B, if that’s the only choice you will provide, Minister Eggen, why don’t you trust parents? Because clearly, it would seem that you don’t. Based on the actions you’ve taken, we have to ask these questions.”

Van den Bosch noted that if there had been alleged financial management within the public school system, “the minister would have stepped in and appointed a trustee…why didn’t that happen?”

Moreover, the ministry’s insistence that parents sign on to another school board right away is stoking their fears, he told LifeSiteNews. “That is a tactic that frankly, a bully would use…Minister, why are you acting like a bully here?”

Sun columnist Lorne Gunter raised similar concerns in an op-ed last week. The “NDP have had an ideological hate on for homeschooling ever since it became a trend in the 1990s,”  he wrote, saying that adds “another possible twist” to last week’s shocking events.

Each Alberta homeschooled child is allotted $1,670 in public funds for educational expenses. The money goes to the administering school board, which is entitled to 50 percent to cover its own logistical expenses.

According to the ministry, its audit found WISDOM spent $5.2 million, or 90 percent, of the homeschooling grants Trinity received in 2014/2015; that money earmarked for teaching students was used to pay for babysitting, alcohol, funeral expenses; and that the Trinity and WISDOM boards and administration were mainly represented by two families who had received more than $2.76 million between them in salaries in the last three years.

Eggen also directed Trinity and WISDOM to pay back $998,000 in unused student funds by the end of November.

The government’s allegations are clearly grave enough to justify its decision to turn the matter over to the RCMP and Canada Revenue Agency, wrote Gunter.

But the NDP bias against homeschooling that may be “clouding events” is also harbored by public services unions, which traditionally back the NDP. Among those particularly is the Alberta Teachers’ Association (ATA).

A hot-button election issue in 2012 was “whether the School Act should be amended to compel all students, including those homeschooled, to learn the politically correct version of human rights.”

With Christian homeschooling parents up in arms, ATA newsletter editor Jonathan Teghtmeyer then dismissed their protests as an “opportunistic move to advance a narrative that benefits their cause and ideology: school choice and parental rights.”

“As if those were bad things,” Gunter noted wryly.

Last spring, moreover, the NDP attempted to gut a Tory motion asking the government to affirm its commitment to parents’ right to choose their children’s education, sparking an imbroglio in which PC Interim Leader Ric McIver was thrown out of the Legislature, and into the national spotlight.

Motion 504’s sponsor, McIver angrily contested NDP Speaker Bill Wanner’s acceptance of the NDP amendment, which changed the wording to give pre-eminence to public education over private, charter and home schools. After McIver’s protest, the NDP withdrew the amendment and the original motion passed.

Moreover, Eggen has been notably hardline on Bill 10, which mandates gay/straight alliances and inter-sex washrooms as anti-bullying measures to protect sexual minorities in schools, and allows no exemptions for independent, parent-led schools that receive public funding.

Progressive Conservative Premier Jim Prentice brought in Bill 10, which Wildrose and the NDP joined the Tories to pass unanimously in March 2015 — two months before the NDP’s historic landslide victory.

Eggen’s subsequent zeal in enforcing the bill led to a highly publicized battle between the minister and Pastor Brian Coldwell, head of a Christian school board that supervises 1,200 homeschoolers and provides classroom education for 200 students.

While Eggen has not yet made good a threat to pull funding from the Independent Baptist Christian Education Society, he has launched an investigation of the board after Coldwell refused to assure him by deadline he would comply with Bill 10.

The “New Democrats are so integrated with the Alberta Teachers Association they can’t help but be affected by the ATA’s desire to defund all private schools and create a monopoly for the public school system and their own teachers’ union,” Coldwell told LifeSiteNews in an earlier interview.

Indeed, Gunter noted that an “NDP supporter called online for all homeschooling ‘to be made illegal. … Public school for all students is needed to maintain a healthy democracy.’ He added ‘we need to get kids into government run daycares by the age of 1 so that their minds can be molded correctly.'”

WISDOM intends to fight the NDP allegations in court, and what the RCMP and CRA do remains to be seen, but it’s clear that Trinity and WISDOM’s current crisis has been a boon for the NDP.