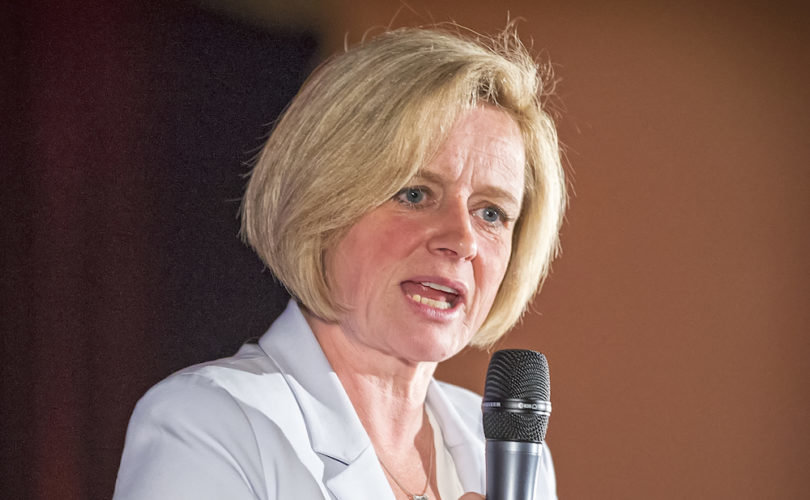 “We are not taking a heavy hand in enforcement,” Payne told the Alberta legislature Tuesday, when tabling a motion for draft regulations on euthanasia and assisted suicide.

“We do reserve the right to change our approach if it becomes unmanageable and patients wishing to access this right cannot do so, but we are moving forward in a way that is as respectful as it can be to all people in Alberta,” she added.

Premier Rachel Notley’s NDP majority is “working to set out a framework of protocols and processes to ensure that if a patient in a facility where medical assistance in dying is not available, that there will be a process in place for transfer of care likely through Alberta Health Services,” Payne told reporters Monday.

“Our responsibility in this matter is actually quite small and specifically relates to the framework for medical providers and patients,” she told the legislature.

Its board members include Edmonton’s Archbishop Richard Smith and former premier Ed Stelmach.

Smith and his five fellow Alberta bishops condemned euthanasia and assisted suicide in a February 11, 2016 statement that declared Catholic health facilities would not kill their patients.

The bishops sent Payne a strongly worded submission in March, asserting that the “Catholic Church and her institutions will always serve the vulnerable and suffering in our society” but “we cannot as individuals and as institutions participate in, condone or advocate for physician assisted suicide or euthanasia.”

Covenant Health reiterated that in a May 24, 2016 statement on its website.

The Catholic corporation’s “ethical and moral opposition to medical assistance in dying” and its “unequivocal position to not provide or explicitly refer for same needs to be recognized, respected and honoured by all persons served by, or working within Covenant Health including, but not limited to: funders, regulatory bodies, advocacy groups and the larger community,” it reads.

However, a “response to both a patient’s consented request and an external provider arrangement to assume care of the patient” may “require safe and timely transfer of the patient and their records to a non-objecting institution for continued exploratory discussion and assessment,” the statement reads.

Timothy Wilson, press director for Alberta’s Health Ministry, said that conscientiously objecting institutions “will be required to transfer patient care to our health authority, Alberta Health Services, which will coordinate access and support for the patient.

The pro-euthanasia lobby has loudly decried the NDP’s decision.

Dying with Dignity Canada’s CEO Shanaaz Gokool stated that “taxpayer-funded institutions” have “no right” to conscientiously object to providing euthanasia or assisted suicide, while its Edmonton spokesperson Brad Peter told MetroNews that in some towns, the only hospital is Catholic — as is the case in Camrose, Vegreville, Bonnyville, and Banff.

“In some scenarios, an individual might have to leave the community they’re in because there exists no other hospital facility other than Covenant Health,” said Peter.

Covenant Health President and CEO Patrick Dumelie countered that physicians and staff of Covenant Health agree to the healthcare corporation’s Catholic position when they sign on.

“All of our physicians and health professionals understand our faith and our belief and our ethics,” he told MetroNews.

People opposed to euthanasia and assisted suicide also pay taxes and are “members of the public,” point out the bishops in their March brief.

Many people do not want to be killed by medical means, and if a healthcare institution does so as a “service,” that will “radically change” the “trust its clients place upon it, and what they expect from it,” they wrote.

Euthanasia advocates may paint the Church as “callous, inhumane, perhaps moralistic or cruel” for taking this stance, but “centuries of pastoral practice have taught us that suicide and killing, even natural death itself, do not end suffering,”stated the bishops.

“In fact, all attempts to deny suffering, or to hide or sanitize it, simply do not work. All that euthanasia and assisted suicide can do is pass suffering on to others.”

“I believe it is shocking that with fewer than 72 hours left in the spring session as scheduled, the NDP has tabled crucial documents directly related to the life and death of Albertans,” stated Calgary-Lougheed PC Dave Rodney, “and dedicated a mere six hours to the most important decision of any person’s life.”

1
Time-lapse video shows huge crowds at 2022 March for Life
2
New York mask mandate back in effect one day after judge strikes it down
3
Humble truck drivers could be the ones who finally liberate Canada from Trudeau’s COVID tyranny
4
GoFundMe freezes more than 4 million dollars raised for Canadian truckers protesting vax mandates
5
Dr. Robert Malone warns parents about COVID vaccines for children at ‘Defeat the Mandates’ rally in DC
Subscribe to Daily Headlines »