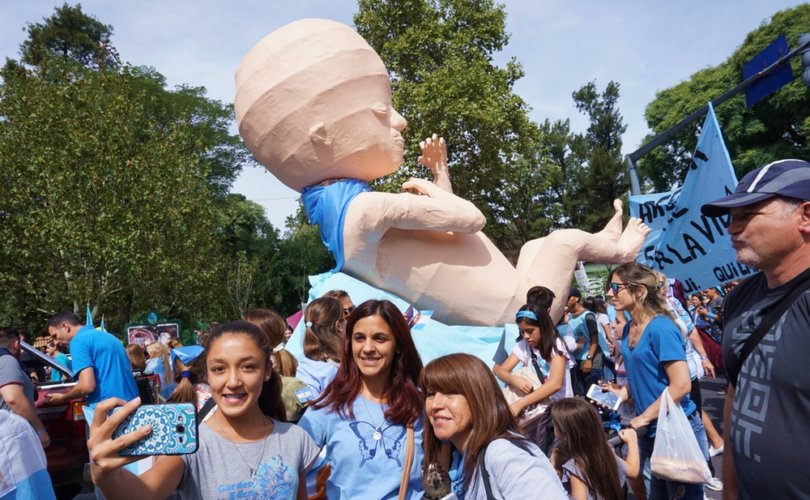 A huge papier-mâché figure representing a baby in gestation was part of an Argentina pro-life event in 2019.Fernando de la Orden

BUENOS AIRES, March 25, 2019 (LifeSiteNews) – Nearly two million Argentines marched for life on Saturday, rallying under the banner “In Defense of the Two Lives,” a statement referring to protecting both the life of the mother and her preborn baby.

Clergy joined families and students sporting the signature sky-blue kerchiefs of their movement to protest against proposals to decriminalize abortion in the South American country. In 2018, the Argentine Senate rejected an abortion initiative that would have legalized abortion for unborn babies before the 14th week of pregnancy. The issue has inspired raucous rallies and protests on the part of pro-abortion radicals, which have sometimes degenerated into violence including the use of homemade gasoline bombs.

“This is the beginning of a path that must unite Argentines around saving women and unborn children’s lives,” said Ana Belen Marmona of Unidad Provida, reported Noticias Argentina. Marmona said further, “We’re uniting to tell our representatives, who will debate this issue in Congress, that abortions do not solve anything, that they are a failure of society and a step backward in terms of rights.”

Over loudspeakers, the chant of “It’s here, it’s here, the voice of the innocent” [Presente, presente, la voz del inocente] reverberated over the multi-lane Avenida del Libertador in Buenos Aires, as countless numbers filled the thoroughfare. The marchers waved the blue and white Argentine banner and signs reading “Save two lives” and “rights for the child.” A huge papier-mâché figure representing a baby in gestation was part of the event. The papier-mâché baby, named “Alma” [soul] was also wearing the kerchief of the pro-life movement, which happens to be the same shade of blue found on Argentina’s flag.

The cast of thousands began marching at about 2:30 pm on Saturday, and wound its way to the law school at the University of Buenos Aires. Participants heard speeches given by leaders of various faiths, as well as experts in law and bio-ethics. There were musical groups on hand, as well as veterans of Argentina’s disastrous war in the Falkland Islands. Veterans cried out: “Thirty-seven years ago we defended our two islands; now we defend two lives.”

Cecilia Pando, a noted advocate of human rights, told a local radio show that television news did not feature coverage of the march. Organizers of the March told local media that Buenos Aires alone saw three hundred thousand participants, while there were also thousands more in cities across the country, including Rosario, La Plata, and in the various provinces.

Ayelén Alancay, who leads the Mas Vida pro-life group, called on marchers to report illegal mills where abortions are committed. “The practice of abortion is a mistake that day after day claims more lives. We Argentines want to live, not abort. It doesn’t matter whether you were a planned or unexpected birth, you have a right to life.”

The March for Life had cooperation from the Catholic bishops of Argentina, the Christian Alliance of Evangelical Churches of Argentina, and numerous pro-life organizations.

Argentine President Mauricio Macri is expected to present to Congress a bill to reform the nation’s criminal code, which has been in place since 1921. Currently, Argentina law punishes with a four-year sentence those mothers who consent to or facilitate the abortion of their child. Reform of the criminal code was delayed three times in 2018 because of fears that abortion would be decriminalized. Debate on the bill is expected to continue throughout this year.