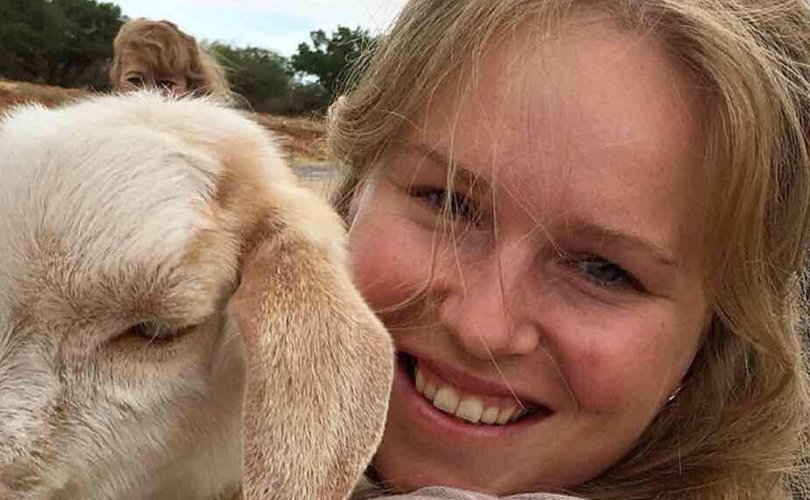 (LifeSiteNews) — Within days of charismatic Australian freedom activist and protest organizer Monica Smit’s arrest for trumped-up charges of “incitement,” supporters have raised almost $300,000 to help Smit in a political fight for freedom that has become deeply personal.

33-year-old “firebrand” Monica Smit, a traditional Catholic writer and activist, has been one of Australia’s leading voices in opposing the government’s totalitarian response to COVID-19, fighting tirelessly against the draconian measures imposed upon millions of Australians under the guise of COVID mitigation since last year.

After her arrest and imprisonment late last month for alleged “incitement” of anti-lockdown protests, a fundraiser was launched to help cover legal fees expected to mount as the case moves through the courts.

Donors have already raised $279,748 in support of Smit and her cause.

In an emotional video, Smit’s parents thanked their daughter’s supporters, expressing gratitude especially for their prayers and kind messages.

“Look, we’re holding out really well, considering but we have our moments,” said Lise Smit. “And all those beautiful messages and comments on Monica’s site, you know, they bring us to tears. But they’re tears of joy because we feel the support.”

“So many of you have said that you’re praying and that is the most powerful thing you can do right now,” she added.

“Vigils and protests will only get people hurt and arrested.”

Smit’s mother encouraged supporters to write letters to her daughter during her incarceration, and said that “sacrifices, attached to your prayers, are very powerful.”

Remarking that his daughter’s case is expected to go to the High Court, John Smit said, “Maybe this is what we need to do. We need to wake up Australia that we’ve lost our freedoms. My parents left Europe to go to a country that was free.”

As an independent journalist Smit covered many traditional Catholic pilgrimages and other events prior to getting involved in her efforts to free Australia from the grip of COVID-19 lockdowns and mandates.

Writing about a 2019 pilgrimage in Denver, Colorado, Smit wrote, “I love pilgrimages. You are guaranteed to finish them a better person, not only faithfully but physically and mentally as well.”

But last year after her home country of Australia imposed some of the most restrictive and oppressive COVID-19 measures in the English-speaking world, Smit’s journalism and involvement took a different turn,

After founding Reignite Democracy Australia, an organization to rally Australians to fight for freedom, Monica Smit organized dozens of protests to encourage Australians to stand up for their rights against a government which has suppressed and all by obliterated Australian citizens’ civil liberties since March of last year.

“All over the world the momentum is so big, and it’s growing stronger and stronger every single day,” Smit said at a May 15, 2021 rally in Sydney.

“Every single one of you who are here today should be so proud to be here, standing next to the courageous brothers and sisters of Australia who are fighting for this country.”

Smit addressed part of her comments to Australia’s “corrupt, lazy politicians,” saying that she and those who support her are “absolutely sick of paying to watch you destroy this country.”

“Your free ride is over,” she said. “We’re coming for your jobs.”

Last month, Smit organized some 40 statewide protests across Victoria, Australia, which has been subjected to some of the most severe lockdowns in the nation under dictatorial premier Dan Andrews.

In some of the protests, participants engaged police officers in physical confrontations, leading to injuries. The incidents inflamed government crackdowns on public protests and led Australian police to pursue the law enforcement means at their disposal to punish Smit for rallying opposition to Australia’s burgeoning totalitarian regime.

Just over a week ago on August 31, Smit was stopped while driving her car, arrested, and charged with “incitement” for encouraging Australians to engage in anti-lockdown protests.

Smit live-streamed the traffic stop, which was cut off abruptly after an officer informed her she was under arrest for incitement and took her phone.

After her arrest, Smit rejected the bail conditions proposed by a Melbourne magistrate which would have undermined the mission of her organization and the rights of Australians writ large.

As reported by the Remnant, “[t]hese bail conditions, as set down by a Melbourne Magistrate on September 1, included that Monica must not share ‘any material which incites opposition to the Chief Medical Officer’s directions…’; not disclose the identity of police officers involved in her case; and that all groups and social media accounts related to RDA are to ‘remove any materials which incite opposition to the Chief Health Officer’s directions.’”

A statement put out by Smit’s parents, John and Lise, cited Mani Shishineh of Legalbit Lawyers who said that “signing that bail order would have effectively put an end to democracy” throughout Australia.

“Change will not occur in this country without people who are prepared to make sacrifices, and Smit has set an excellent example,” Hiscox said.

— Article continues below Petition —
SIGN: Show Pope Francis the Latin Mass will survive any suppression
Show Petition Text
36716 have signed the petition.
Let's get to 40000!
Thank you for signing this petition!
Add your signature:
Show Petition Text

Smit’s parents said that while their daughter has “an excellent legal team who offered their services pro-bono,” donations to Smit’s fund will be used “to help cover the costs of the coming fees and prepare us to face the fight ahead.”

“This is potentially going to be a long battle and we may have to go from the Supreme Court to the High Court, thus all the financial help we can raise is greatly appreciated,” John and Lise Smit said.

From behind bars, Smit is refusing to give up the fight.

“I would rather be in prison, with no rights, than willingly sign them away,” she said in a statement made public by her attorneys.

“No one can break you, if you don’t let them,” she added.

During her May rally, Smit clearly expressed her mission, the mission of her organization also, noting that wide-scale political action has become necessary following the failure of other “diplomatic” means.

“Anyone who’s been following Reignite Democracy Australia and me over the past seven months have seen the struggles,” she said. “You’ve seen that we’ve done everything the diplomatic way. We did email campaigns, we did petitions, we did journalism, and they ignored us.”

“We’re really lucky because we have God on our side,” Smit told supporters.

“And God always wins in the end. So, let the games begin.”

Monica Smit is set to appear in court November 10, but her legal team is working to have her released from custody ahead of that date.

Anyone interested in donating to support Smit in her personal battle for freedom, even as she fights for the freedom of her fellow Australians, can go to ReigniteDemocracyAustralia.com.au/Monicas-Defence-Fundraiser