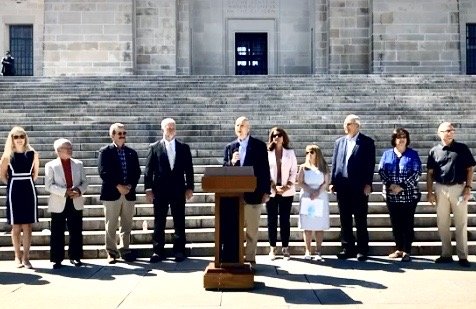 Dr. Anthony Levantino, a former abortionist, described the brutal procedure in graphic detail in a video. In order to perform a dismemberment abortion, the abortionist has to use what is called a sopher clamp, accessing the uterus through the cervix.

“This is a grasping instrument, and when it gets a hold of something, it does not let go,” Levantino said. “The abortionist uses this clamp to grasp an arm or a leg. Once he has a firm grip, the abortionist pulls hard, in order to tear the limb from the baby’s body. One by one, the rest of the limbs are removed, along with the intestines, the spine, and the heart and lungs.”

According to Levantino, removing the baby’s head is the most difficult part of a dismemberment abortion. “The head is grasped and crushed,” Levantino said. “The abortionist knows he has crushed the skull when a white substance comes out of the cervix. This was the baby’s brains. The abortionist then removes skull pieces.”

“Nebraska is a pro-life state, and this week the legislature took an important step to strengthen our culture of life,” Ricketts said Saturday.

“Sen. Geist’s bill bans the horrific procedure of dismemberment abortion, which tears apart a living baby’s body limb by limb. This brutal procedure has no place in a humane, civilized society. I commend Sen. Geist, and the bill’s supporters in the Unicameral, for outlawing this barbaric practice in Nebraska.”

Geist commented, “I was honored to carry LB 814. This bill passed because a great majority of the legislative body and a great majority of Nebraska citizens agree with pro-life legislation. I appreciate all who prayed, who contacted their senators, and all who voted. This is a significant step forward for the pro-life movement.”

LB 814 makes it a felony for a doctor to perform dismemberment abortions throughout the Cornhusker State, punishable by up to two years in jail and a fine of $10,000.

Pro-life leaders expressed their happiness about the bill being signed into law.

“Nebraska Right to Life thanks Governor Ricketts and Sen. Geist for their leadership in passing the LB 814 dismemberment abortion ban,” said Julie Schmit-Albin, the organization’s executive director. “With the assistance of many other pro-life supporters and advocates, you have proven once again that Nebraska is a pro-life state.”

LB 814 passed on August 13, “two days after the family of Julie Schmit-Albin, the longtime executive director for Nebraska Right to Life, announced she had gone into hospice,” according to the Omaha World-Herald. Schmit-Albin had been battling cancer.

“Today is a historic day for our state because Nebraska is finally putting an end to the gruesome practice of dismemberment abortion,” echoed Nebraska Right to Life president Sandy Danek.

“Throughout this year’s legislative session, LB 814 sparked a statewide discussion about the harms of dismembering a living child and the intrinsic value of every human life,” she added. “This bill would not have been possible without thousands of pro-life Nebraskans who provided research, education, and advocacy in support of unborn lives.”

Karen Bowling, executive director for the Nebraska Family Alliance, called the signing of the bill “a landmark victory for the pro-life movement. Senators had to overcome nearly every procedural hurdle in the book to get here, but 33 senators affirmed that the unthinkable act of dismembering a live baby in the womb should be abolished.”

She emphasized that all babies “deserve a chance at life, and no living human being should be torn apart limb by limb. LB 814 is based on science and compassion.”

Marion Miner, associate director for Pro-Life and Family for the Nebraska Catholic Conference, said, “We are honored to stand with Governor Ricketts, Senator Geist, elected officials, and other advocates for the unborn from across the state of Nebraska in celebration of LB 814 becoming law.”

“Ending the horrific practice of dismemberment abortion in our state is a significant victory, yet it is just one part of building a culture of life in Nebraska which helps provide for the needs of mothers and children, honors a common human dignity, and works to make abortion unnecessary and unthinkable,” he pointed out.

“I have always advocated for the lives of unborn children and will continue to defend our state’s legal right to protect the unborn,” Arkansas Attorney General Leslie Rutledge commented after the ruling.