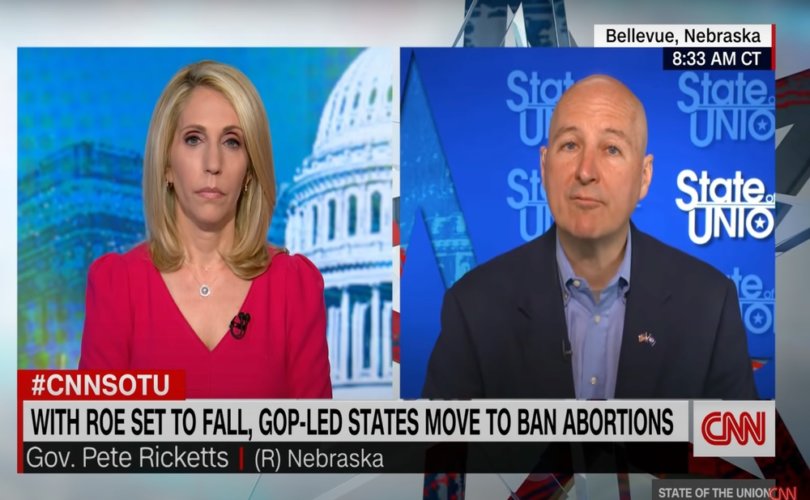 “Nebraska is a pro-life state,” Ricketts told CNN’s Dana Bash on the network’s “State of the Union” show May 15. “I believe life begins at conception, and those are babies too. If Roe v. Wade, which is a horrible constitutional decision, gets overturned by the Supreme Court, which we’re hopeful of, here in Nebraska, we’re going to take further steps to protect those preborn babies.”

Asked whether the intended pro-legislation in the Cornhusker State would also ban abortions in cases of rape or incest, Ricketts replied, “They’re still babies, too. Yes.”

The Republican governor went on to explain that if the Supreme Court rules to overturn the federal “right to abortion” established in the 1973 decision in Roe v. Wade, he “will work with our speaker of the legislature to work on a special session and do more to protect preborn babies.”

“We’ll have to wait and see what that decision is before we can take further steps, but that would certainly be my intention,” Ricketts said.

Republican Gov. Pete Ricketts of Nebraska said that he will call a special session of his state’s legislature to pass a total ban on abortion if the Supreme Court overturns Roe v. Wade this term. https://t.co/0WYeg2G1ff

Many Republican governors have angled to drastically restrict abortion in their states in recent months and years, anticipating that a pro-life majority of justices on the Supreme Court will back Mississippi’s 15-week abortion ban by overturning both Roe and Planned Parenthood v. Casey (1992), which upheld Roe.

Pro-life and pro-abortion lawmakers, governors, and activists alike, meanwhile, have ramped up their efforts in recent weeks after the unprecedented leak of a draft majority opinion written by Supreme Court that suggested the Court will overturn previous precedent legalizing abortion at the federal level.

To date, more than a dozen states have already enacted “trigger laws” to immediately ban the killing of unborn babies if Roe v. Wade is struck down, and roughly half of U.S. states are expected to pass laws outlawing or severely restricting abortion.

Meanwhile, Democrat-led states like California along with leftist corporations like Yelp and Amazon are already moving to encourage and even provide financial support for women to obtain abortions outside of their pro-life home states in the event Roe v. Wade is overturned.