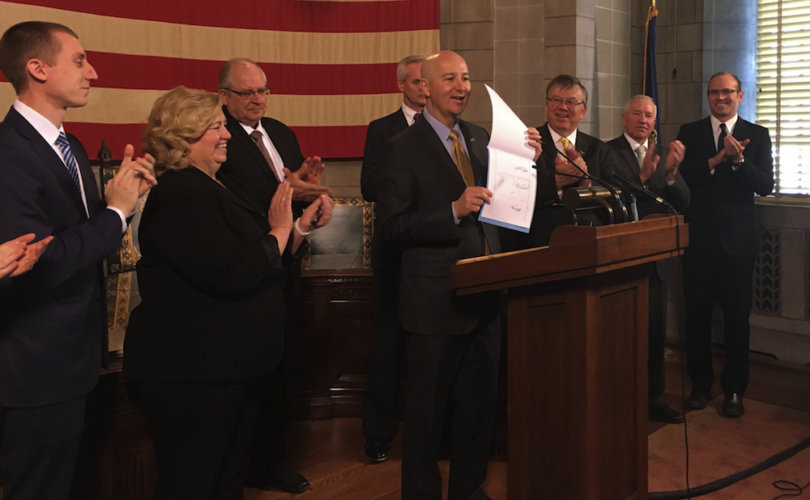 LINCOLN, Nebraska, January 10, 2020 (LifeSiteNews) – Nebraska Republican Gov. Pete Ricketts has received some pushback for his recent proclamation declaring January 22 a statewide day of prayer to end abortion, chiefly from a group notorious for opposing intersections of faith and government.

“I do hereby urge all individuals to pray on their own or with others, according to their faith, for an end to abortion,” reads the proclamation. It calls for prayers on the upcoming anniversary of the Roe v. Wade ruling. It also encourages Nebraskans to “take direct action to aid mothers, fathers and families in need, especially those expecting a child who cannot provide for themselves.”

The proclamation is in keeping with Nebraska’s strong pro-life record, and comes as pro-lifers across the country hope the U.S. Supreme Court will take its upcoming review of Louisiana’s abortion regulations as an opportunity to reconsider the legitimacy of Roe.

On Thursday, the Freedom From Religion Foundation (FFRF) declared that the state “has no business — and no power — to tell citizens when or whether to pray, much less what to pray about.”

“Our Founders even rejected a proposal to pray during the constitutional convention, when they adopted our godless Constitution,” FFRF co-presidents Dan Barker and Annie Laurie Gaylor claim in a letter lecturing Ricketts. “In issuing this call to prayer, you have abridged the freedom of conscience of citizens in your state.”

Issuing a public statement asking for prayers obviously carries no legal force, however, and proclamations formally recognizing days of prayer and fasting, including with more overtly-Christian language than that used by Ricketts, date back to the earliest days of American history. Presidents George Washington, John Adams, and James Madison all issued such proclamations.

Even Thomas Jefferson, though he expressed reservations about doing so as president, was willing to sign a proclamation for a “day of public and solemn thanksgiving and prayer to Almighty God” in his capacity as Governor of Virginia. (FFRF’s letter includes an out-of-context invocation of Jefferson’s famous “wall of separation between Church & State” phrase, which he meant as an expression of protecting religion from government.)

The letter also falsely claims legal abortion is a “constitutionally protected right,” and asserts Nebraska isn’t a pro-life state on the basis of a 2014 Pew survey finding a narrow majority of the residents favor keeping abortion legal. But a 2019 Public Religion Research Institute (PRRI) survey found that Nebraskans who would ban all or most abortions outnumber those who would allow all or most abortions, 48% to 43%.

Lastly, the letter lectures Christians that “your bible says nothing about abortion,” and that Jesus told His followers not to “pray standing in the synagogues and on the street corners to be seen by others.”

The first claim is a popular pro-abortion straw man that ignores the Bible’s abundant statements about the sanctity of human life and the evil of shedding innocent blood. The second references Jesus’ warning against displaying piety for the purpose of projecting a self-image, which does not prohibit public prayer for selfless purposes (such as calling for the protection of others).

Previous FFRF targets have included crosses and nativity scenes at local courthouses, a judge who gave a Bible to a repentant convict, prayer at school board meetings, senators tweeting Bible verses, and elementary school Bible clubs. During a Democrat presidential primary debate in October, CNN aired a FFRF commercial featuring presidential son Ron Reagan Jr. soliciting donations and declaring himself an “unabashed atheist” who is “not afraid of burning in hell.”