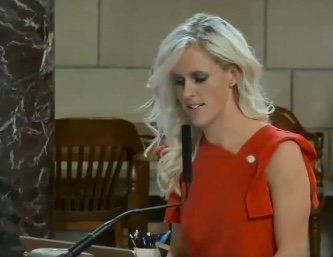 Slamming opposition for obscuring the issue of abortion with “identity politics,” Slama, a Republican, said, “We’ve had a few people get up on the mic today and say, ‘As a woman, I oppose this bill and here’s why.’ If the opposition is going to bury themselves in obscurities and identity politics, I’ll hop in.”

“As the only young woman under the age of 35 in this legislature,” she declared, “I’m proud to stand in support of women, both born and preborn, by supporting Senator (Joni) Albrecht’s pro-life LB 933.”

Lamenting the loss of an “entire generation” in the 62 million deaths caused by abortion since Roe v. Wade, Slama declared, “My generation, which has suffered the greatest losses from abortion, is the pro-life generation.”

“We can’t get those 62 million lives back,” she continued, “or even the tens of thousands of lives we’ve lost to abortion here in Nebraska. But here in 2022, heaven have mercy on us if we know the science decisively proves that life begins at conception and we fail to take action.”

The bill failed to obtain the necessary 33 votes to overcome the filibuster that prevented it from coming to the floor for a vote, even though a majority of the legislature supported its passage.

I’m 25 and the youngest woman in our Nebraska Legislature by a decade.

The abortion lobby has tried continuously to silence me.

Their threats won’t bring me down, and I’ll keep standing strong for women, both born and preborn.@LifeNewsHQ pic.twitter.com/1Mkfebfjmv