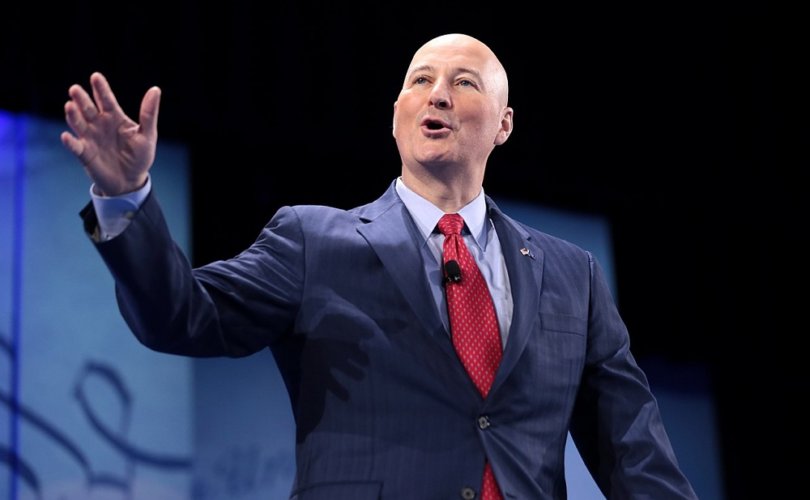 LINCOLN, Nebraska (LifeSiteNews) – Nebraska pro-life Republican Gov. Pete Ricketts announced Monday that he would not call a special session of the state’s one-house legislature to vote on any pro-life legislation. The legislature would have voted to move the state’s abortion ban from 20 weeks to 12 weeks.

Ricketts announced his decision after receiving a letter from Republican Speaker of the House Mike Hilgers informing him that only 30 state senators would vote to move the 20-week abortion ban to 12 weeks. Thirty-three votes are required to overcome filibusters in the Nebraska State House.

Today, I received a letter from Speaker of the Legislature Mike Hilgers. It indicated that 30 state senators support amending Nebraska’s abortion laws to prohibit abortions starting at 12 weeks in a special session. Here’s my response: pic.twitter.com/LH7o4BEgnF

“It is deeply saddening that only 30 Nebraska state senators are willing to come back to Lincoln this fall in order to protect innocent life,” Ricketts stated.

“This letter shows that elections have consequences,” Ricketts continued. “In our state, we must work to protect the most vulnerable, and that includes our preborn babies. There’s no more important issue. We cannot achieve equality for all if we silence human beings before they even have a voice.”

Ricketts, who supports a total ban of abortion, appeared on CNN shortly after the unprecedented leak of the Dobbs decision in May and said that he would call a special session for fall 2022 to put an abortion ban in place.

Hilgers began to look for support for an abortion ban after the leak, he said in a phone interview with the Lincoln Journal Star. He suggested a 12-week abortion ban after speaking to state senators. “I wanted to give the governor a sense of what would attract the most support,” Hilgers said.

No legislation that would have proposed the ban was drafted, according to Hilgers.

The announcement follows a failed referendum in Kansas that would have denied the “right” to an abortion by amending the state constitution. It also follows the enactment of a pro-life law in Indiana that bans nearly all abortions in the state. Hilgers maintains that neither the Kansas referendum nor the enactment of the pro-life law in Indiana would have swayed the vote in a special session of the Nebraska legislature.

In April, the Nebraska legislature failed to pass a proposed trigger law that would have ended abortion after the overturn of Roe v. Wade. The vote resulted 31-15 in favor of the legislation, two votes shy to overcome a filibuster. Two state senators who voted for the proposed trigger law, Republicans Robert Hilkemann and John Stinner, are not listed as supporting the 12-week ban.

One-third of Nebraska’s state senators are on the ballot in November. Also on the ballot are candidates for governor, as Ricketts has reached his term limit. Republican Jim Pillen, a member of the University of Nebraska Board of Regents, supports pro-life measures, including abortion bans and prohibiting tax funds from paying for abortions. The Democratic candidate, Carol Blood, supported a filibuster for the trigger law that failed in April, but describes herself as pro-life.