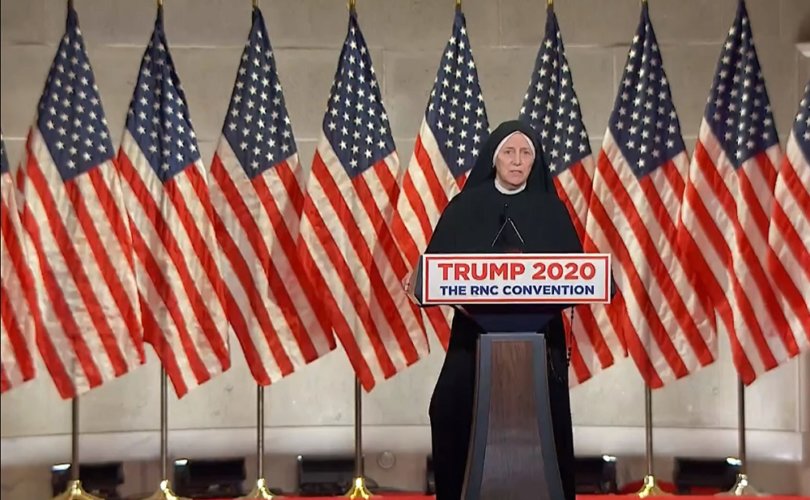 Massimo Faggioli, a professor of Catholic theology at Villanova University took to social media to protest the appearance of Sister Deirdre “Dede” Byrne, POSC. He posted several messages on Facebook in response to her speech where she called Americans to “stand up for life against the politically correct or fashionable of today” and described Biden-Harris as “the most anti-life presidential ticket ever” because together they support even “late-term abortion and infanticide.”

Faggioli’s first critique of the American nun, written over a video of her speech, was “Ho il voltastomaco”, i.e. “I’m sick to my stomach.”

“The Catholic Church has rules for the participation of clergy and religious in the election campaign and party politics, but obviously here in the USA now nobody cares.”

To this, he posted a page from the Catechism of the Catholic Church that clearly applies only to priests.

Priests are usually forbidden from partisan politics, including running for public office or joining unions, “unless, according to the judgement of the ecclesiastical authority, the rights of the Church and the defence of the common good require it.  Even then, however, the Church deems the activity “foreign to the clerical state.”

Religious sisters, even mother superiors like Sister Dede Byrne, are not clerics. They do, however, take oaths of obedience to their religious superiors. Byrne has indeed already circumscribed her civic activities at the behest of her religious order, having retired from the military’s Medical Corps after a tour of duty in Afghanistan.

In response to objections that America magazine’s editor-at-large Fr. James Martin, S.J. had spoken at the Democratic Party’s National Convention,  Faggioli said that there was “there is a substantial difference between delivering a prayer to a party convention and a partisan speech like this.”

The professor was then informed by other Twitter-users that Sister Simone Campbell had appeared at the DNC on more than one occasion. At the 2012 DNC, she gave a short speech. Sister Simone, when recently asked about her organization’s stance on legal abortion, replied: “That is not our issue. That is not it. It is above my pay grade.”

This low pay grade may be Sister Simone’s catchphrase: she said something similar in 2012.

“Here is what bishops, priests, members of religious orders and Catholic organizations (including magazines) should do in an election season: pray and educate,” the pro-LGBT Jesuit priest said.

Martin said that no candidate or party “ever could” fully encompass the totality of Church teaching and that Catholics are not “one-issue voters.” He also stated that endorsing candidates “splits dioceses and parishes” into “supposedly ‘Good Catholics’ and ‘Bad Catholics’.”

Catholic author John Gerard Lewis, however, in his book Catholic Voting and Mortal Sin: How Your Vote Can Endanger Your Salvation, makes the case that “voting for the candidate who least adheres to the Church’s teaching on abortion can be a mortal sin.” A number of pro-life priests have made the case that Catholics cannot in good conscience vote for Biden.

Martin went on to bring up the specter of the Church losing her tax-exempt status.

“We would (and should) lose that privilege if we were to engage in partisan politics,” said the DNC 2020 participant.

“Catholic leaders obviously have their own thoughts about political matters, but in public and in their public roles, they should be religious, not partisan.  For all these reasons, we can pray and educate, but not endorse or campaign.”

To Martin’s credit, when he prayed for the DNC this year, he listed the “unborn child in the womb” as one of “those most in need.”

Sister Simone Campell neglected to mention the unborn. Instead she characterized the DNC gathering as “an important next chapter in our story of who we will become as a nation.”