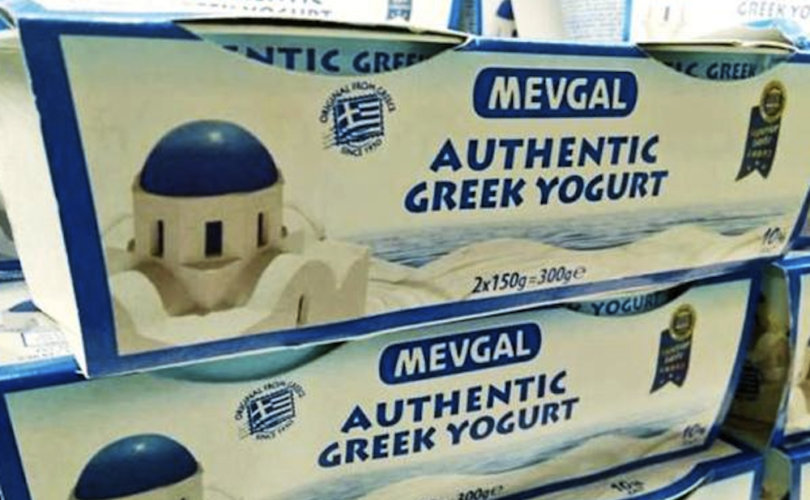 Nestlé uses a picture of the famous blue domes of the Church of the Resurrection on the Greek island of Santorini for its yogurt packaging. The popular “Greek” yogurt proudly displays one of the most instantly-recognizable images in Europe. The huge, beautiful church domes are topped by white crosses as they majestically line the sparkling Aegean seashore.

But recently the Switzerland-based company began photoshopping the crosses out.

A Lidl spokesman tried to explain the eradication of the Cross by referencing spiritual tolerance. “We avoid the use of religious symbols because we do not wish to exclude any religious beliefs.”

Nestlé, Mevgal, and Carrefour have not issued any statements on the cross deletions.

This censorship is no small thing to the Orthodox Christian-dominated citizens of Greece.

Far from being just an empty symbolic artifact, which would make the amputated crosses merely historically inaccurate, the Cross as the central emblem of holy Orthodoxy in Greece is not only a representation of the heart of Greek culture but a primary icon of national identity.

Orthodox leaders throughout Greece are calling for a boycott of any company that eliminates “the sign and image of the cross.”

The Thira Diocese condemned what it called the “commercial profanation” of its churches. “Counterfeiting the photographic depiction of a holy church cannot be tolerated for reasons of political or commercial expediency,” an official diocesan statement read.  “On the contrary, it betrays a lack of respect for the integrity and the sanctity of the monuments, and, unfortunately, a lack of education.”

“If, as Greeks, we accept lightly such arguments of ‘political correctness’ or ‘multiculturalism’ to distort the respect of our faith and our culture,” the ecclesial statement warned, “similar excuses are also used by heathen states to justify the defamation of Christian churches.”

Orthodox Archbishop Gregorios of Great Britain characterized the censorship as an “immoral act.” “They hurt the Christians — not only the Greeks because it was a Greek church, but all Christians,” he said. “I hope that many others will protest against this silly decision.”

Metropolitan Ignatios Lappas of Thessalonica called the doctored images “demonic” and said Greece is being discriminated against because it isn’t powerful enough to fight back.

“Imagine the same thing happening in Russia, with products parceled and plastered with pictures of Moscow’s gold domes, only without their crosses,” Ignatios said. “They would be paying each and every person there millions in damages. But here, they have not only stolen our voice … but they know that the cost of damage caused in this small country will be small.”

A spokesman for the Greek Orthodox Church in Athens said a special meeting of the Holy Synod has been called to discuss this corporate censorship of Christianity.

Catholics have joined the Orthodox protest. Prague Cardinal Dominik Duka called for Lidl’s condemnation in a letter to the Greek ambassador. Speaking of Greek democracy and philosophy as key foundations of Western civilization, Duka said the companies’ “ignorance and suppression of their external expression bears witness of the priorities some businesspeople have.”

Cardinal Duka added the warning, “So far, ‘only’ the falsification of photos has occurred, but there are fears that soon real crosses may be removed even from churches.”

A Lidl spokesman, after excusing the censorship with claims of needing “religious neutrality” so as “not to hurt the sensibility of other religions,” offered, “If it has been perceived differently, we apologize to those who may have been shocked.”

Nevertheless, the company did not restore the photograph on its packaging to its crosses-intact original.

“We are a company that respects diversity and this is what explains the design of this packaging,” the company justified.

“The irony, of course, is that the removal of the Cross is a destruction of diversity, by refusing to acknowledge the historical, cultural, and religious importance of the symbol,” Breitbart’s Dr. Thomas D. Williams pointed out. “The company is, in fact, fighting exclusion by excluding Christian symbolism.”

Lidl then repeated the same airbrushing of crosses that started the uproar.

The company promoted its “Eridanous” brand yogurt showing Dolceacqua’s St. Antonio Abate church in Italy without the crosses on its facade or bell tower.

The supermarket giant admitted to Dolceacqua mayor Fulvio Gazzola that Cross eradication “is part of an Italian and European publicity strategy.” The mayor commented, “They are free to do what they want, but they shouldn’t ruin photos. This is harmful to the image of our village and to our Christian traditions.”

Lidl again apologized for “distorting the image of their iconic church,” excusing themselves by saying they used an already-censored photo. But instead of restoring an untouched photo to the promotional materials, Lidl said they would simply remove the whole image “immediately.”

One critic described the predominant European position as “No Crosses Allowed.”

Lidl’s Facebook page received a flood of critical comments such as, “If there were products from Hindu, Sikh, Jewish, or Muslim countries with their symbols depicted on there, I wouldn’t have a problem buying them.”

Another poster noted, “As a Christian I feel really hurt, discriminated against, upset and disappointed that you have done this, if it is the case I won’t be shopping at your store anymore.”

“This cannot be excused,” Martin Zapletal wrote on his Facebook page. “We (must) show them that crosses simply belong to our country and culture and that we are not afraid.”