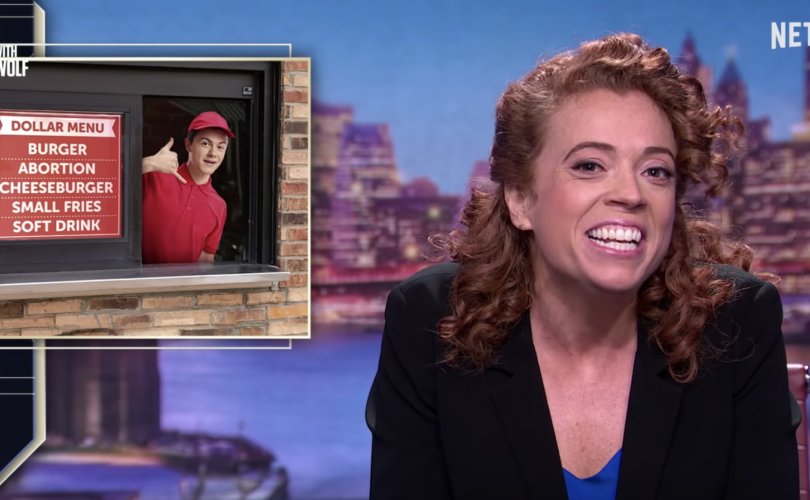 August 20, 2018 (LifeSiteNews) – Just three months and ten episodes in, Netflix has canceled its talk show starring Michelle Wolf, the left-wing comedian who gained notoriety earlier this year for a series of pro-abortion jokes many on both sides found beyond the pale.

The Break with Michelle Wolf premiered in May, but Netflix has decided not to order any more episodes, The Daily Beast reports. The Beast’s Matt Wilstein adds that the show’s showrunners and entire writing staff weren’t notified they were being dumped until they saw the news on Twitter. One source connected to the show reportedly called Netflix’s handling of the situation “classless.”

“Both the Hollywood Reporter and Deadline cite sources who say that ratings weren’t what execs were hoping for,” Hot Air’s Allahpundit observed. “God only knows how bad your numbers have to be to get canceled on a platform with unlimited server space and no time-slots to worry about.”

Wolf came to prominence in March for a monologue at the annual White House Correspondents’ Dinner in which (among other controversial “jokes”) she said that Vice President Mike Pence “thinks abortion is murder. Which, first of all, don't knock it 'till you try it – and when you do try it, really knock it.”

Her performance drew criticism not only from pro-lifers, but from several in the mainstream media.

Margaret Talev, president of the White House Correspondents Association, acknowledged that Wolf’s “monologue was not in the spirit” of “offer[ing] a unifying message.” CNN editor-at-large Chris Cillizza called her abortion joke “beyond the pale.” The Hill announced it would sit out next year’s dinner unless “major changes” were implemented to prevent it from “cast[ing] our profession in a poor light.”

For his part, Vice President Pence simply cited James 1:2, saying “I count it all joy when I endure trials or criticisms.”

Despite the bipartisan pushback, Wolf doubled down on inflammatory abortion advocacy on her Netflix show, devoting a July 8 monologue to a litany of vulgar abortion jokes and common talking points. She claimed that abortion is merely “stopping a baby from happening” like the time-traveling DeLorean from the Back to the Future movies, that abortion should be “as easy and safe as pushing the on-demand button in the middle of your remote,” and that pro-life men are “uncomfortable” with not being able to “control women.”

Wolf concluded the segment with a “salute to abortion,” in which she donned a star-spangled majorette’s costume, was flanked by a drum corps, and threw confetti while making declarations like “abortion, I salute you!” “if you want an abortion, get one!” and her closing line, “God bless abortions and God bless America!”

“Wolf’s ‘Salute to Abortion’ prompted horrified Netflix customers to cancel their subscriptions, petition on Change.org for the show's cancellation, and promote a #BoycottNetflix hashtag on Twitter,” Craig Bannister of CNS News noted Sunday.