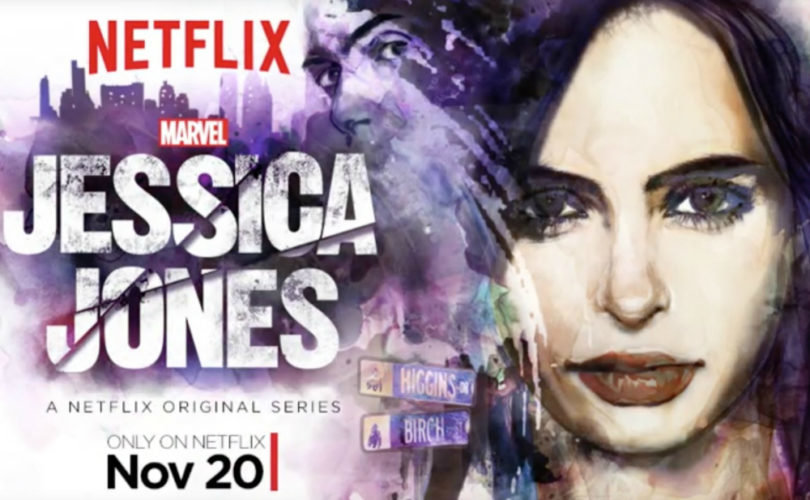 But in the Netflix series Jessica Jones, abortion advocates say there's something else to praise Jones for: encouraging an impregnated rape victim to abort her child.

“In a way, Netflix's Jessica Jones is one long commentary on rape survival,” writes Slate.com staff writer Christina Cauterucci in a piece titled “Anyone Who Opposes Abortion for Rape Survivors Should Watch This Jessica Jones Scene,” at a URL that says “Jessica Jones shows GOP candidates why opposing rape exceptions for abortion is wrong.”

In the show, Jones and her abuser entrap college student Hope Schlottman, who is impregnated by Jones's abuser, Killgrave. Jailed for killing her parents, Schlottman pays an inmate to beat her up “to induce a miscarriage,” writes Cauterucci. After this fails, Schlottman tells Jones she wants to abort her child as soon as possible because “every second it's there, I get raped again and again.”

“It was worth the risk,” Schlottman says when informed that the failed attack on her child would have more likely ended in her death. “It'll be worth the next risk. Whatever it takes.”

However, evidence exists that killing a unique unborn child is often worse for raped mothers. Studies cited by the Pro-Life Action League show that of the three quarters of impregnated rape victims who gave birth to their children, none regretted their decision.

Likewise, “94% of women who gave birth said abortion would not be a good solution to a pregnancy resulting from rape,” and  “93% of those who had abortions said it 'had not been a good solution to their problems' and they 'would not recommend it to others in their situation.'”

Abortion has also been linked to depression and drug abuse, among other negative psychological reactions.

At Bustle.com, a pro-abortion “women's” website, Samantha Rullo likewise praises the show's take on abortion. Rullo notes that Schlottman states, “I wanna live, I wanna have children, but I won't give life to this thing. I won't do it.” Jones eventually gets an abortion pill for Schlottman, which she takes.

According to Rullo, “Jessica says later in the episode, 'Some a**holes would call Hope 'selfish,'' but Jessica Jones portrayed Hope's story with more than enough sympathy and strength to ensure that only a villain like Killgrave would ever dare say such a thing.”

“Schlottman's pleas testify to the injustice of abortion politics that don't include exceptions for rape, incest, and women's safety,” according to Cauterucci. “Politicians who would force a woman to carry to term a fetus created by assault are inflicting yet another violation on a survivor who's already had her desires trampled.”

“Politicians should be concerned with punishing rapists, not their victims,” concluded Cauterucci.