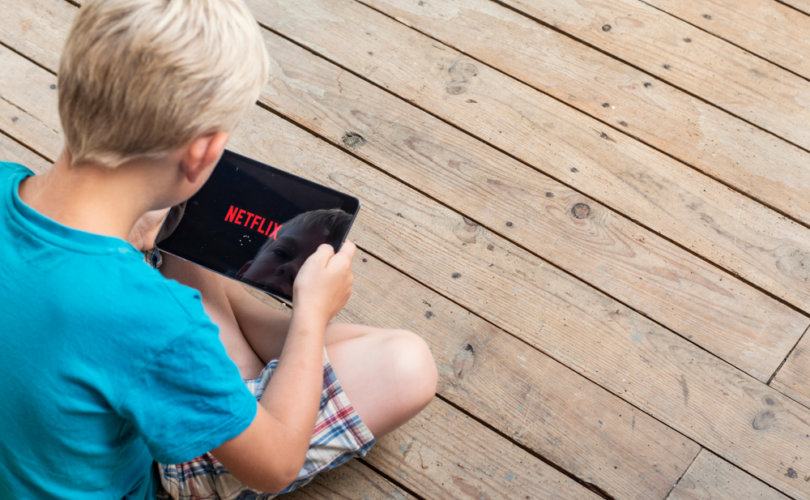 TORONTO, December 7, 2018 (LifeSiteNews) – Netflix Canada has weighed in on the repeal of Ontario’s graphic sex education program, telling children they can “‘learn’ about sex” by watching sexually explicit films that have recently been added to the streaming service.

“Since the Ontario sex-ed curriculum has gone back in time, you can ‘learn’ about sex the way teens in the ‘90s did: all the American Pie movies are now on Netflix,” tweeted the streaming company on Dec. 5.

The tweet was in reference to a decision of Ontario’s new Progressive Conservative Government — led by Doug Ford — to rollback the Kathleen-Wynne sex-education program after outrage from parents of all backgrounds and faith traditions. Wynne, who had a same-sex partner, is the former leader of the Liberal party. Under her leadership, the party was soundly defeated in the June 2018 election.

The American Pie films are promoted as teen sex comedies that depict its young characters talking about and performing sex acts.

“American Pie takes sex and turns it into a sport,” the critic writes.

“The Kathleen Wynne sex-ed, which has yet to be fully repealed, sexualizes children, promotes the unscientific gender identity theory, and overrides parental rights. The Wynne sex-ed, doesn't even address the dangers of pornography. Yet here is Netflix referring children to films which feature hypersexualized discussions, and make a laughing matter of the production and distribution of child pornography,” said Tanya Granic Allen, president of Parents As First Educators, to LifeSiteNews.

“Given their track record (13 Reasons Why), should Netflix really be handing out advice for children on how and what to ‘learn’? Parents will decide ‘how much’ and ‘when’ in dealing with sex-ed, not the government, and certainly not Netflix,” she added.

Jack Fonseca, Director of Political Operations for Campaign Life Coalition, told LifeSiteNews that it is crucial for conservatives to ensure that Premier Doug Ford keeps his promise to keep the Wynne curriculum out of schools. The province is running a consultation period until December 15 where parents can give the government “feedback” regarding their children’s education.

“It is absolutely vital that parents and other concerned citizens participate in this consultation process using all three of the remaining vehicles that the government has provided to give it feedback,” he said.

“Our children’s psychological, spiritual, and physical health depend on parents convincing Doug Ford to honor his promise of a total repeal of this child-sexualizing curriculum.”

Fonseca added that the convicted pedophile who wrote the 2010/2015 curriculum, former Deputy Education Minister Ben Levin, has now served his sentence and is now lobbying online to normalize pedophilia.

Campaign Life Coalition (CLC)  is the chief political arm of the pro-life movement in Canada. Earlier this year, it expressed its gratitude to Premier Ford for listening to parents who objected to the ousted Liberal government’s plans to indoctrinate their children with a graphic and age-inappropriate sex-ed curriculum.

“Thank God that Premier Doug Ford listened to the parents who elected him, by repealing Kathleen Wynne's radical sex curriculum as of September 2018,” wrote CLC.

CLC believes that the goal of the media's political propaganda campaign is to pressure the new Ford government to abandon its promise to parents.

“In these propaganda pieces, the media gives a platform to paid union activists, radical trans activists, and LGBTTIQ activists who do not at all represent the ordinary voting public which awarded Doug Ford a super majority, in large part, because of his campaign promise to repeal Wynne's sex program,” it said.

Now even porn-peddling Netflix has sneered at Ford for respecting parents’ wishes regarding their sexual education.

Until December 6, parents had the opportunity to attend Town Halls to express their support for Ford’s repeal of the Levin-Wynne sex program. Now concerned Ontario residents are encouraged to fight for kids by filling in an online survey, answering questions on an open submission form, and emailing the government directly at [email protected]. The deadline for submissions is December 15.